Let There Be Night 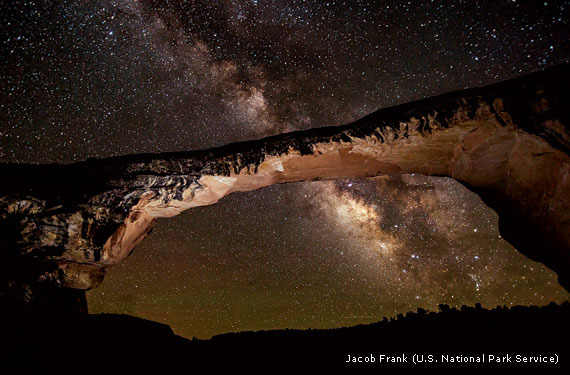 ON CLEAR, MOONLESS NIGHTS, up to 5,000 stars should be visible from almost anywhere in North America. Yet most U.S. city dwellers are lucky if they can see any at all. For decades, light pollution from populated areas has been rising by about 6 percent a year, according to a study by Italian and U.S. astronomers. As a result, most Americans live in places so immersed in artificial light that they never see the Milky Way.

“We’ve been losing the night sky so gradually that most people don’t realize what they’re missing,” says Scott Feierabend, executive director of the International Dark-Sky Association (IDA), a nonprofit group working on light pollution. “Millions of Americans under the age of 40 have grown up without ever experiencing real darkness or star-studded skies.”

The Safe Cloak of Night

National parklands shelter some of the last truly dark skies. Fifteen years ago, the U.S. National Park Service (NPS) recognized its night skies as endangered, so it created a Night Skies Team to advise park managers and nearby communities on lighting designs that prevent illumination from spreading into parks. “We’ve found that with the right solutions in place, light pollution is reversible,” says NPS physical scientist Bob Meadows.

That’s good news for wildlife. Light pollution is altering the migratory, feeding and reproductive behavior of many species that evolved with biological rhythms based on cycles of darkness and light. “Animals such as sugar gliders, bats and juvenile salmon all show delays in their nighttime activities when exposed to light,” says University of Southern California professor Travis Longcore. In addition, according to IDA, poorly designed, unshielded outdoor lights also waste billions of dollars every year in energy expenditures and release millions of tons of carbon dioxide into the atmosphere.

To date, 12 NPS sites are among three dozen locations worldwide designated by IDA as International Dark Sky Parks (DSP)—places with exceptional starry nights that have worked to minimize light pollution. Seven of the NPS sites—Canyonlands, Natural Bridges, Capitol Reef, Hovenweep, Grand Canyon-Parashant, Chaco Culture and Black Canyon of the Gunnison—are in the sparsely populated Four Corners region of the Southwest. Another DSP, Big Bend National Park in Texas, “is one of the darkest places I’ve ever experienced,” says University of Redlands astronomer Tyler Nordgren. And at the nation’s largest DSP, the 3.4-million-acre Death Valley National Park, “the night sky literally begins right at your feet,” says Nordgren, revealing “the universe the way people saw it 100 years ago.”