Ranch Reform in the Rain Forest

How the sellers of Brazilian beef, leather and other cattle products are convincing ranchers to stop razing the Amazon 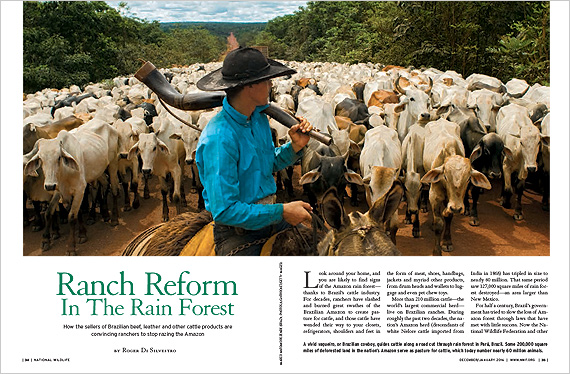 LOOK AROUND YOUR HOME, and you are likely to find signs of the Amazon rain forest—thanks to Brazil’s cattle industry. For decades, ranchers have slashed and burned great swathes of the Brazilian Amazon to create pasture for cattle, and those cattle have wended their way to your closets, refrigerators, shoulders and feet in the form of meat, shoes, handbags, jackets and myriad other products, from drum heads and wallets to luggage and even pet chew toys.

For half a century, Brazil’s government has tried to slow the loss of Amazon forest through laws that have met with little success. Now the National Wildlife Federation and other organizations, backed with new legal measures by Brazilian officials, are trying a different approach: persuading major companies—from meatpacking giant JBS to Puma, Nike and the supermarket chain Walmart—to buy cattle products only from ranchers who do not destroy forest. During the past six years, the effort has all but eliminated deforestation on participating ranches and, as a model, offers promise to stop destruction of other tropical forests worldwide.

This new private-sector strategy “differs fundamentally from traditional approaches to stemming forest loss because the buyers of deforestation-linked products can bring about rapid change,” says Barbara Bramble, NWF’s senior director for international wildlife conservation, who has worked on tropical-forest issues for the past three decades. “Companies have the flexibility to choose where they buy, so they can avoid ranches with deforestation.” 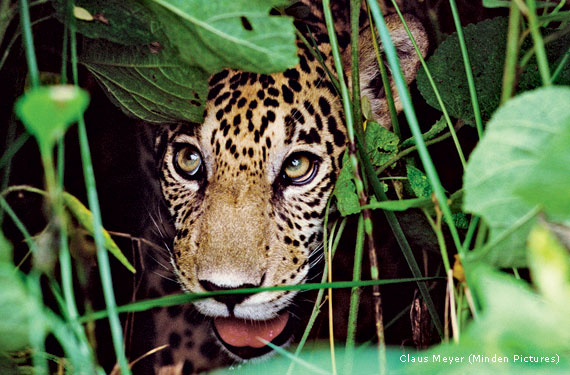 “The tropical rain forest is the greatest expression of life on Earth,” says Tom Lovejoy, a biologist who has studied and worked to protect the Amazon since the 1960s. Covering less than 7 percent of the planet’s surface, tropical forests house more plant and animal species than any other terrestrial habitat. A full third of these forests—2.7 million square miles—lie within the Amazon Basin, 60 percent of them in Brazil.

Beyond destroying biodiversity, losing the Amazon forest threatens to change the region’s water dynamics because its trees both absorb water from the ground and release it as vapor into the air. Half the roughly 9 feet of rain that falls in the Amazon annually is released back to the atmosphere, generating future rainfall. Within the next 35 years, scientists say, deforestation is likely to reduce the region’s rainfall as well as increase average and upper temperatures, the length of dry seasons and the severity of droughts. Already, forest loss in the Amazon releases some 500 million tons of greenhouse gases a year, contributing significantly to global climate change.

For these reasons and more, slowing the loss of the Amazon forest is critical, says Lovejoy, an environmental science and policy professor at Virginia’s George Mason University. “It is simultaneously the driver of continental climate, a major carbon repository and the world’s greatest repository of biological diversity.”

Despite making progress battling rain-forest loss in recent years, Brazil has one of the world’s highest levels of deforestation, losing more than 1,900 square miles in 2014, says Nathalie Walker, NWF’s senior manager for tropical forest and agriculture. “Some two-thirds of the nation’s nearly 300,000 square miles of deforested Amazon today serve as cattle pasture.”

To fight these losses, the Brazilian government in 1965 initiated its Forest Code, a law requiring landowners in Amazônia to protect 80 percent of their property as legal reserves where deforestation is prohibited. Compliance with the law has been lax, however, making it largely ineffective in remote areas of the Amazon lacking enforcement personnel. 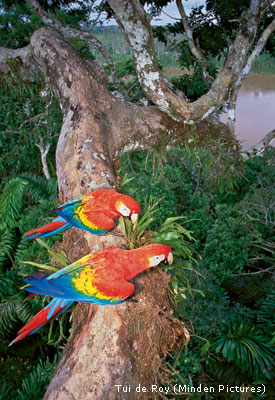 In the 1990s, changes in the cattle industry itself provided a new tool for stemming rain-forest loss. Prior to that time, the Brazilian cattle sector had few exports. Yet local eradication of hoof-and-mouth disease, monetary devaluation and the eruption of mad cow disease in other parts of the world created high global demand for Brazilian beef about 20 years ago. Today Brazil is the leading exporter of beef products in the world, shipping out more than 1.72 million tons in 2014, according to the Brazilian Export Association (Abiec). It also is a major supplier of leather. In all, Brazil’s export of cattle products totals $8 billion a year.

Significant quantities of these exports end up as finished products in the United States, Europe and other regions where many consumers care about the environmental impact of products they buy. NWF and its partners saw such markets as an opportunity to bring about change in how ranching is conducted. For a Brazilian ranch to be profitable and productive, “there is no reason for deforestation,” Bramble says. “The problem is poor land management, and training in husbandry is the solution. We can save the forest while helping the industry to grow.”

The turning point for protecting the Amazon came in 2009 with reports by Greenpeace and Amigos da Terra-Amazônia Brasileira outlining how major U.S. and European meat and leather retailers were buying livestock products from slaughterhouses supplied by ranchers who were violating the nation’s Forest Code. At the same time, the federal Public Prosecutor’s Office in the state of Pará took a new hard line on logging violations, suing not only large ranchers who illegally cleared land but also the slaughterhouses that bought from them. The office also used the threat of lawsuits to persuade Brazilian retailers to boycott slaughterhouses linked to illegal deforestation. Because Pará is home to one of the nation’s largest cattle herds and has been responsible for 40 percent of the region’s recent deforestation, these actions had a powerful impact.

Faced with legal pressure, the top four meatpacking companies—JBS, Bertin (now merged), Marfrig and Minerva—signed agreements with the government, escaping prosecution by promising not to purchase livestock from ranchers involved with illegal deforestation. In October 2009, these same meatpackers, to avoid bad press, signed even more-restrictive agreements with Greenpeace, establishing deadlines by which they would cease to buy livestock from Amazon ranches where any deforestation occurs.


Power of the Purse

The news was immediately good: The Brazilian Amazon’s deforestation rate dropped 14 percent between August 2009 and 2010. Since then, deforestation rates have dropped by as much as 75 percent on post-agreement lands, according to a report by University of Wisconsin–Madison researcher Holly Gibbs and colleagues (including Walker) published in May 2015 in Conservation Letters.

“These recent and promising developments show that the private sector can push progress faster than the law alone,” Bramble says. So far, only the largest meatpackers in the Brazilian cattle industry have signed zero-deforestation agreements. “As additional meatpackers come on board,” Bramble adds, “we hope to finally sever the link between cattle and forest destruction in the Amazon.”

Challenges remain. Deforestation monitoring takes place only on ranches that sell to slaughterhouses that have signed zero-deforestation agreements. Moreover, the agreements monitor only direct suppliers of livestock products but not other parts of the industry, such as calving operations and small- to medium-sized ranches that serve as middlemen—properties that most likely account for the lion’s share of current Amazon deforestation tied to cattle. 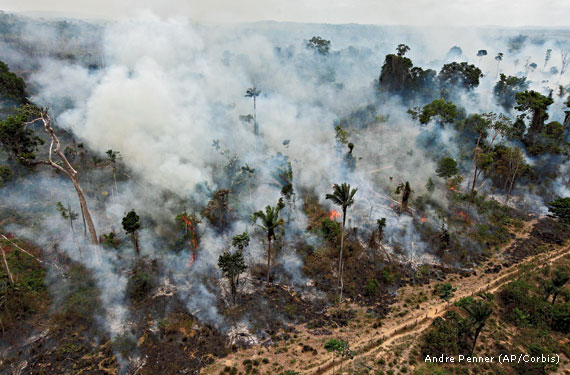 Still, Bramble, Walker and their colleagues remain optimistic. For evidence of the power of the market-based approach, they point to a project in the Brazilian state of Mato Grosso. Launched in 2012 by the nonprofit Instituto Centro de Vida, the project, dubbed Novo Campo, teaches ranchers how to improve the quality of their meat and leather products while also increasing profits and protecting local rain forest.

One retail company that participates in the project is Bottletop, a luxury fashion brand from the United Kingdom that sells upscale leather products such as purses. Company officials began working with JBS and the Novo Campo program in Brazil to ensure they were sourcing leather only from tanneries whose hides came from ranches that were not destroying forest. “Bottletop is a relatively small fashion company, but we think big,” says company director Oliver Wayman. “Our aim is not only to help tanneries to improve their sourcing and create zero deforestation, but to persuade consumers to ask similar questions of much larger brands.”

Novo Campo’s impact on the ground has been dramatic. On 14 properties that participated in the program’s pilot phase, ranchers intensified their operations—growing more cows on the same amount of land—by planting better grasses, supplementary feeding, giving cows more shade and water and rotating the animals among fenced-off paddocks so that pastures can recover and be used again for grazing, eliminating the need to raze new forest.

Participating ranchers clearly have benefited from these efforts. According to Walker, the amount of beef they produce annually has nearly tripled. And because more shade, water and high-quality grasses make their cows fatter and healthier, the ranchers can sell the animals to meatpackers for a higher price.

The project, now gearing up to include 200 to 300 additional ranches, is significant because “it demonstrates what can be achieved by implementing best land-management practices already available,” Walker says. In addition to protecting biodiversity-rich forests and increasing rancher income, she cites a third benefit: a decrease in the region’s climate-changing carbon dioxide emissions by eliminating forest clearing and planting new trees for shade. “The rancher, the forest and the planet all win,” Walker says.

Leather hides, often sourced in Brazil, are shipped to processers like this one in China to be made into consumer goods. To eliminate tropical deforestation from the production of leather—as well as products such as beef, soy, timber and palm oil—the National Wildlife Federation works worldwide with producers, traders, retailers and consumers to develop deforestation-free supply chains. The Federation also organizes workshops and field trips to educate industry leaders about the need to stop rain-forest destruction. To learn more, visit www.nwf.org/deforestation.