Pangolins: Too Prized to Survive?

The most poached mammals on Earth, pangolins face extinction unless conservationists act quickly 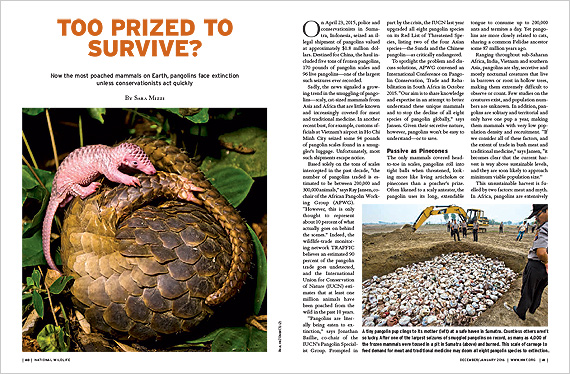 ON APRIL 23, 2015, police and conservationists in Sumatra, Indonesia, seized an illegal shipment of pangolins valued at approximately $1.8 million dollars. Destined for China, the haul included five tons of frozen pangolins, 170 pounds of pangolin scales and 96 live pangolins—one of the largest such seizures ever recorded.

Sadly, the news signaled a growing trend in the smuggling of pangolins—scaly, cat-sized mammals from Asia and Africa that are little known and increasingly coveted for meat and traditional medicine. In another recent bust, for example, customs officials at Vietnam’s airport in Ho Chi Minh City seized some 94 pounds of pangolin scales found in a smuggler’s luggage. Unfortunately, most such shipments escape notice.

Based solely on the tons of scales intercepted in the past decade, “the number of pangolins traded is estimated to be between 200,000 and 300,000 animals,” says Ray Jansen, co-chair of the African Pangolin Working Group (APWG). “However, this is only thought to represent about 10 percent of what actually goes on behind the scenes.” Indeed, the wildlife-trade monitoring network TRAFFIC believes an estimated 90 percent of the pangolin trade goes undetected, and the International Union for Conservation of Nature (IUCN) estimates that at least one million animals have been poached from the wild in the past 10 years.

“Pangolins are literally being eaten to extinction,” says Jonathan Baillie, co-chair of the IUCN’s Pangolin Specialist Group. Prompted in part by the crisis, the IUCN last year upgraded all eight pangolin species on its Red List of Threatened Species, listing two of the four Asian species—the Sunda and the Chinese pangolin—as critically endangered.

To spotlight the problem and discuss solutions, APWG convened an International Conference on Pangolin Conservation, Trade and Rehabilitation in South Africa in October 2015. “Our aim is to share knowledge and expertise in an attempt to better understand these unique mammals and to stop the decline of all eight species of pangolin globally,” says Jansen. Given their secretive nature, however, pangolins won’t be easy to understand—or to save. 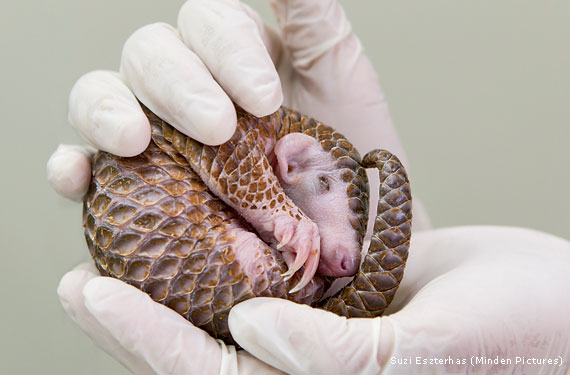 The only mammals covered head-to-toe in scales, pangolins roll into tight balls when threatened, looking more like living artichokes or pinecones than a poacher’s prize. Often likened to a scaly anteater, the pangolin uses its long, extendable tongue to consume up to 200,000 ants and termites a day. Yet pangolins are more closely related to cats, sharing a common Felidae ancestor some 87 million years ago.

Ranging throughout sub-Saharan Africa, India, Vietnam and southern Asia, pangolins are shy, secretive and mostly nocturnal creatures that live in burrows or roost in hollow trees, making them extremely difficult to observe or count. Few studies on the creatures exist, and population numbers are unknown. In addition, pangolins are solitary and territorial and only have one pup a year, making them mammals with very low population density and recruitment. “If we consider all of these factors, and the extent of trade in bush meat and traditional medicine,” says Jansen, “it becomes clear that the current harvest is way above sustainable levels, and they are soon likely to approach minimum viable population size.”

This unsustainable harvest is fuelled by two factors: meat and myth. In Africa, pangolins are extensively hunted for bush meat. What is really tipping the creature toward extinction, however, is its mythic power in traditional medicine. Pangolins have become highly prized in the Far East, particularly in Vietnam and China, due to the unfounded belief that their blood and scales—made of keratin such as that in human hair and nails—hold medical properties similar to rhino horn. Viewed as walking medicine chests, pangolins are believed to cure health ailments ranging from cancer to asthma.

Such beliefs have caused the price of pangolin parts to soar. Scales are now valued at about $1,500 per pound, and given its exorbitant price, pangolin meat is seen as a status symbol, with pangolin-fetus soup said to cost as much as $1,750 a bowl. Presentation can be as brutal as the price, says Maria Diekmann, a pangolin fan and founder of the Rare and Endangered Species Trust in Namibia. She explains: “You go to a restaurant and order a live pangolin, it comes to your table, they slit its throat and add its blood to your wine.”

Exorbitant prices tempt poachers, whose tactics are predictably grim. According to Diekmann, poachers attempting to pull pangolins out of burrows often grab the animals’ legs, breaking them in the process. Some use snares or dogs to capture pangolins, which are then packed into sacks, crates or other containers where they may spend a week or more in transit. Before being sold to traffickers, pangolins are often force-fed inappropriate foods or have water injected under their skin to increase weight and hence their value.

“The pangolins are scared, starving and dehydrated,” says Diekmann. “At this point, it doesn’t seem to matter if they are sold on the black market dead or alive. It’s a shame, as pangolins are one of the most harmless of animals. If you want to have the power of pangolins’ scales, all you have to do is chew on your fingernails. It is 100 percent the exact same thing.”

Researchers believe that Asian pangolin populations have been depleted to such an extent that poachers are increasingly traveling to Africa, particularly Central and West Africa, to hunt the mammals. Locals are usually employed for the task but are paid very little relative to black-market prices. And though pangolin trade in Africa is generally not allowed without valid permits, most laws protecting pangolins “are not enforced,” says Jansen, “except in Zimbabwe, where this year 10 poachers have been sentenced to jail.”

Jansen and other pangolin conservationists believe the animals deserve the same level of international attention as two other highly coveted and widely poached mammals: elephants and rhinos. Most populations of these two iconic animals are listed in Appendix I of the Convention on International Trade in Endangered Species of Wild Fauna and Flora (CITES)—a listing that bans all commercial trade. Pangolins are listed in Appendix II, which allows some regulated trade. And even though the trade quota for the four Asian pangolin species has been set to zero, trade is still allowed for the four African species.

Beyond upgrading pangolins to Appendix I status and boosting enforcement against poaching, Jansen believes the next step to stop the crisis is to collaborate with Chinese traditional-medicine traders to try and find solutions. “Simply banning the use of pangolin products will just cause all trade to go underground and elevate the price for poached pangolins even more,” he says.


What Will We Lose?

Unless there’s a cultural shift, the future looks rather bleak for these unassuming mammals, with experts unsure of the repercussions if the animals go extinct. “Pangolins consume millions of ants and termites a year and are therefore crucial in performing the important ecological role of regulating social insect populations,” says Diekmann. “Without them, who knows what imbalance could be caused to our ecosystem.”

Yet pangolins should be valued for reasons beyond their ecological role, adds Diekmann, one of the few people in the world to have raised a pangolin born in captivity. “Scientific studies prove that to attract attention, an animal needs to have big eyes and a lot of fur,” she says. “Pangolins are the complete opposite of this, yet they are the most shy and endearing animals I have ever met.” Today, their salvation may depend on others starting to feel the same. 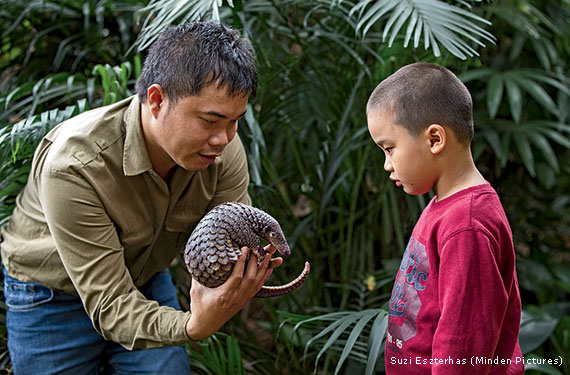 Pangolins rescued from poachers or smugglers find safe haven in the leafy heart of Vietnam at Cuc Phuong National Park. There, Save Vietnam’s Wildlife (SVW) runs its Carnivore and Pangolin Conservation Program, which has rehabilitated more than 200 pangolins since 2006. Last summer it set a record, releasing more than 50 pangolins in one week—a milestone but also a sad sign of the smuggling crisis.

Police who confiscate live pangolins deliver the animals to the park, where they are put in quarantine, treated for injury and disease, and given care so they can be returned to the forest. Before release, a field team assesses the habitat and reviews camera-trap footage to ensure the release area is free of poachers. Some pangolins get transmitters attached to their scales so researchers can monitor their progress.

“Most people in Vietnam don’t know pangolins are illegal to eat,” says Thai Van Nguyen, SVW’s executive director. His group educates local villagers (above) and also works with the government to promote conservation. A recent victory: In May 2015, Vietnam stopped allowing health-insurance coverage for pangolin scales, said to have healing powers. “I feel sad when I see people eating our wildlife,” says Nguyen. “Lose the pangolin and you lose the only scaly mammal on Earth.” 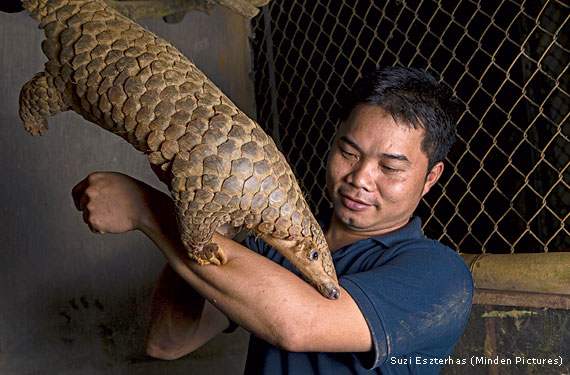