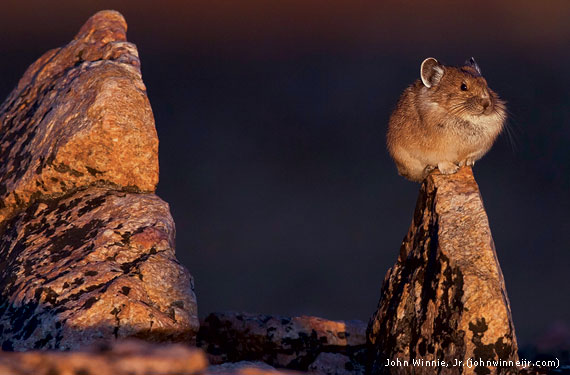 THIS PAST SUMMER, ecologist Erik Beever scoured mountains across the West searching for American pikas— rabbitlike mammals that typically dwell in rock crevices at cool, high elevations. Beever and his crew spent long days climbing up and down steep inclines hoping to spot pikas or their telltale signs: piles of fresh grasses to eat and feces. “You know you are a scientist when you get excited about poop,” he says. Yet in some places, such evidence is getting harder to find.

Pika populations have vanished from hotter and drier parts of their historical range at lower elevations, about 5,600 to 8,400 feet, across the Great Basin and in California. According to Beever’s research, between 1999 and 2008, pika populations across the Great Basin moved upslope by an average of 476 feet. “That’s smokin’ fast,” he says, especially when compared to hundreds of other species worldwide, which on average have shifted their ranges up about 36 feet per decade.

With global temperatures on the rise, some have predicted the pika’s demise, saying it would just keep climbing until it ran out of suitable cool, rocky habitat. Yet research is showing that these small creatures are surviving in some surprising locations, so their fate seems far from written in stone.


Living on the Edge 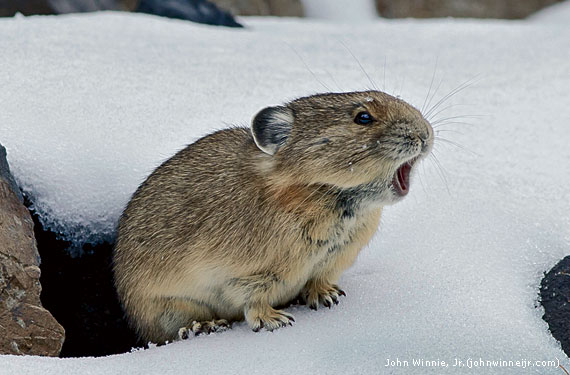 North America has two species of pika: the collared pika in Alaska and northwestern Canada and the American pika, which ranges from western Canada down to New Mexico. They are typically found in talus (loose rock) on cool, moist mountain slopes from 7,000 to 12,000 feet above sea level.

To survive in cold climates, pikas have thick, dense fur and high resting body temperatures of about 104°F. Rather than hibernating, they store piles of hay (mostly grasses and wildflowers) in their dens to consume during winter. Like other lagomorphs such as rabbits and hares, they also eat their feces to extract every bit of nutrition and water from their food. To avoid their many predators, particularly raptors and weasels, these tiny mammals (less than 8 inches long) rarely forage more than 100 feet from their dens or disperse from their talus patches.

With such a small home range, escaping to safe havens can be difficult, and shifts in temperature can be dangerous. Pikas can die within hours in only 78°F if they cannot reach cool refuge under talus. They also cannot tolerate extreme cold, so they tend to inhabit areas where snowpack can act like a blanket in winter.

As a researcher with the U.S. Geological Survey’s Northern Rocky Mountain Science Center, Beever is in the midst of the most extensive regionwide survey ever conducted to assess American pika populations and their vulnerability to climate change. During the past two years, he has worked with multiple state and federal wildlife agencies, universities and nonprofit partners to look for pikas at more than 950 sites in seven western states.

The team is studying conditions at thousands of patches of talus where pikas live or have lived. In addition to arduous site visits, the researchers are using aerial, high-resolution photos to create maps showing the temperature and vegetation cover around 100 areas where they have deployed dime-sized sensors to measure temperature and humidity inside pika dens. The National Wildlife Federation purchased 22 sensors to support Beever’s studies in drought-ravaged California, where snowpack virtually disappeared this year. As a prey species, “the pika is an important piece of our Sierra Nevada ecosystem,” says NWF California Director Beth Pratt, a citizen scientist for Beever’s study. “Figuring out what is going on with them is essential.”

Tom Rickman agrees. Rickman, a U.S. Forest Service biologist working with Beever in California’s Lassen National Forest, says Beever’s research provides insight into a larger climate change picture: “If pikas are becoming extirpated from some of their previously inhabited talus patches, then other species coinhabiting those patches [such as rock wrens and bushy-tailed woodrats] may be going out with them.”

Still, pikas may be more adaptable than previously thought. “I don’t think that species are going to respond to climate change in a simple red-light or green-light manner,” Beever says. At one Oregon site he visited this year, almost all pikas in one canyon had moved so far upslope that “they don’t have a lot more elevation with talus to move to.” In the next canyon north, however, the population had stayed put. The difference? The latter canyon was much deeper, wetter and shadier—a microclimate that provided pikas refuge from the heat.

Pikas recently have been discovered at sites in California, Nevada and Oregon and are living in habitats once thought unsuitable. Andrew Smith, chair of the International Union for Conservation of Nature’s Lagomorph Specialist Group, has been studying pikas living in Bodie, California, which can be as hot as 90 degrees F in summer. Johanna Varner, a biologist at the University of Utah, found pikas thriving in the Columbia River Gorge between Washington and Oregon at just 300 feet above sea level. There, blankets of moss insulate talus from temperatures as high as 89°F and provide up to 60 percent of the pikas’ food. 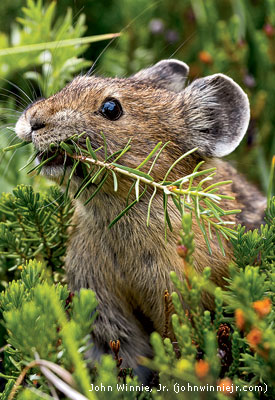 “Nature will surprise us,” says Bruce Stein, director of NWF’s climate change adaptation and resilience program. In August, Stein, Beever and other colleagues published a paper in Conservation Letters outlining how wildlife managers can more effectively plan conservation strategies if they better understand a species’ “adaptive capacity” to cope with climate change. For example, Varner says protecting moss from being trampled by hikers and grazing animals or harvested by horticulturalists for potted plants could help Pacific Northwest pikas. “You can’t often find such a concrete thing that we can do that will make a difference,” she says.

In the end, the key to pikas surviving climate change may be less about their climbing higher and more about humans maintaining suitable pockets of refuge. Somehow this tiny mammal seems to be persisting in certain microhabitats against great odds, or, as Smith says, “They make the best of each of their individual situations.”