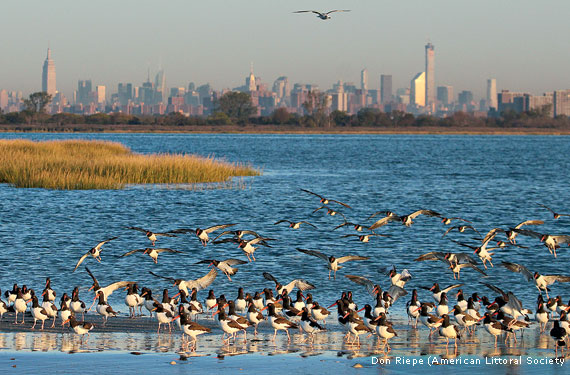 "IT WAS SHOCKING," says Doug Adamo, chief of the Natural Resource Management Division at Gateway National Recreation Area along New York’s and New Jersey’s shores. He recalls vividly the destruction of Hurricane Sandy, which hit the Northeast on October 29, 2012. It killed more than 230 people and caused greater than $60 billion in damage to communities and coastal habitat, including the park’s West Pond.

With winds exceeding 80 miles an hour, the storm took a 25-foot-wide bite out of the pond, a man-made impoundment created for wildlife at the recreation area’s Jamaica Bay Wildlife Refuge. The resulting influx of salt water has turned the once freshwater pond to brackish, and the great bounty of birds seen there have dwindled.

West Pond is just one of almost 170 coastal impoundments that the National Wildlife Federation, its affiliate New Jersey Audubon (NJA), Princeton Hydro and other partners are assessing from Virginia to Maine. With a U.S. Department of the Interior Hurricane Sandy grant and as part of NWF’s climate-smart conservation work, the project is determining which impoundments are most susceptible to climate-change impacts such as severe storms or sea-level rise and which have the most significant value to both wildlife and people.

This is critical information. Scientists have predicted that global sea level will rise as much as 4 feet during this century. As coastal habitat becomes more and more limited, “impoundments might end up being some of the most vital habitat for birds,” says Nellie Tsipoura, NJA senior research scientist. The project will help natural resource mangers prioritize which coastal impoundments to protect, restore or bolster.

Most of these impoundments were created during the 1950s in national wildlife refuges and state wildlife areas to attract waterfowl. With pipes or other mechanisms to adjust water levels, impoundments also provide vital habitat for other wildlife, including migratory shorebirds and fish.

“They also act like speed bumps,” dampening waves during strong storms, says Karl Schrass, NWF’s manager on the project. This spring, Princeton Hydro engineers will map which communities and habitats fall within the “shadow” of certain ponds and could therefore be protected by them, says the company’s John Miller.

The engineers also will determine ways to make the ponds more resilient. This could include adding green infrastructure such as rocks or branches to raise impoundment height or stabilizing vegetation that would create wildlife habitat.

“Trying to resist changes isn’t working,” says Bruce Stein, director of NWF’s Climate Adaptation and Resilience program. “We have to manage for a climate-altered world to make the best choices for people and wildlife.”