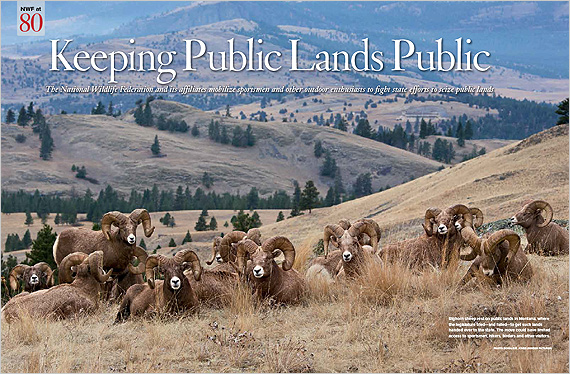 ON A FRIGID WINTER'S DAY in Helena, Montana, this past February, 500 people crammed into the state capitol rotunda, filling balconies and spilling into corridors. Hunters and anglers, hikers and horsemen, children and grandparents hoisted signs reading “Keep Your Hands Off Our Public Lands” and spoke out against a radical legislative effort seeking to take public lands and give them to the state. “This land is our heritage!” Governor Steve Bullock bellowed from a lectern. “Montanans do not support the transfer of public lands out of public hands.” One young woman elicited cheers when talking about the joy of learning to hunt, fish and hike in Montana’s vast public lands. “Future generations of Montanans deserve to have the same positive experiences I’ve had, to drink the fresh water, breathe the clean air and take full advantage of the opportunities to use public lands,” said Rebecca Brown, a Montana State University sophomore.

The rally, by some estimates the largest ever held at the Montana statehouse, worked. The bills protesters fought that day failed. And the same has been true in other western states, where, during 2015, the National Wildlife Federation and its state affiliates helped defeat 21 bills in six states aimed at seizing federal public lands. “This issue is going nowhere in any state with a strong wildlife federation,” says Dave Chadwick, executive director of the Montana Wildlife Federation, an NWF affiliate that helped organize the Helena rally. 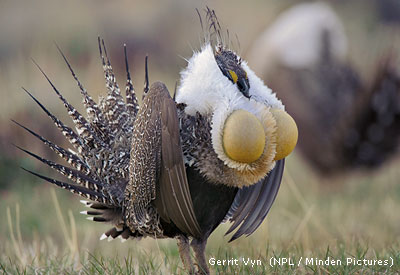 As NWF celebrates its 80th anniversary, the fight to “keep public lands in public hands” highlights the important role the Federation plays in protecting America’s most prized landscapes. Safeguarding public lands for wildlife and people has been a core mission since NWF’s founding. As the organization begins its next chapter, it will bolster work to strengthen protections for these lands and defeat efforts to remove them from federal oversight—moves that would make public lands more vulnerable to industrial exploitation and less accessible to hunters, anglers and wildlife that depend on these habitats.

With their vast open spaces far from human habitation, America’s public lands are one reason this nation still has a rich diversity of wildlife—from predators such as wolves, grizzly bears and cougars to impressive herds of elk, pronghorn and caribou to imperiled birds like the California condor and greater sage-grouse (above). Simply put, America’s public lands provide the habitat and room to roam that is increasingly rare in our urbanized world.

According to the Congressional Research Service, the federal government oversees more than 635 million acres of public land, an amount unrivaled in the industrialized world. Most of these lands are in the West and Alaska, and four agencies—the U.S. Forest Service, Bureau of Land Management (BLM), U.S. National Park Service and U.S. Fish and Wildlife Service—administer the majority, managing them for multiple uses including conservation and preservation of wildlife habitat, recreation, hunting and fishing and extractive uses such as timber harvesting, grazing, mining and oil-and-gas drilling. Balancing these competing mandates is complex, and extractive industries continually push for more access and looser environmental regulations.

Though opinion polls show strong support for public lands, during the past four years land-transfer bills have been introduced in 11 western states ranging from Alaska to New Mexico. Most were tabled or killed, but a few did pass. In Utah, for instance, a bill called the Transfer of Public Lands Act and Related Study was signed into law in 2012, kicking off the current movement across the West. Despite passage, the Utah act and similar laws are toothless: Only the federal government has the authority to turn over public lands, which requires an act of Congress and the president’s signature. Nonetheless, “these bills pop up every decade or so, pushed by anti-government activists,” Chadwick says.

Today’s legislative efforts are spearheaded by the American Legislative Exchange Council (ALEC), a corporate think tank that writes model legislation at the behest of wealthy donors, and the American Lands Council, a Utah-based organization whose executive director has traveled the West encouraging state legislators to submit public-lands-transfer bills.

Why so much interest in handing federal lands to states? Other than anti-federal-government sentiment in general, the answer is natural resources such as oil and gas. Transferring federal lands to states would allow oil and gas, mining and other industries to avoid federal laws such as the National Environmental Policy Act (NEPA), which gives the public the right to comment on and determine federal-land-management policies. A cornerstone of the conservation movement, NEPA is considered a thorn in the side by extractive industries that would like free access to resources on public lands. State environmental laws and regulations are typically far more lenient. On its website, the American Lands Council promotes “better productivity” on public lands, claiming that these lands’ health and access would improve under state control.

But history tells a different story. States have shown a penchant for leasing and selling their own public lands (state trust lands) to business interests and for restricting access to hunters and other outdoor enthusiasts. Colorado, for example, had 4.5 million acres of trust lands when it gained statehood in 1876, but today has just 2.8 million acres—and allows hunting, fishing and wildlife watching on only 500,000 of them. Of Nevada’s original 2.7 million public acres, only 3,000 remain. The state “is more interested in selling the land to balance the budget than conservation or public access,” states a 2015 NWF report, How Could Your Recreational Access Change if Federal Lands Were Controlled by the States?

“When state legislatures and state agencies oversee these lands, it is the companies and big landowners who take precedence,” says Tom France, NWF’s regional executive director for the Northern Rockies. “On federal public lands today you can hunt, fish, camp and walk as far as your legs will carry you. That would all be in jeopardy.” 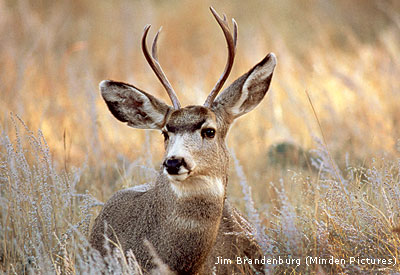 “I see this movement as a huge debacle in the making,” says John Ellenberger, a retired Colorado Division of Wildlife biologist. After decades of  hunting on state and BLM lands in Colorado’s Piceance Basin, he is concerned about the future of big-game hunting due to a gas-drilling boom that has transformed the landscape. “Over the years it began to look more like an industrial area because of all the pipelines and roads and compressor stations,” says Ellenberger. “Every quarter to half mile you see another well. There is a road to every well … and all the roads provide more access to ATVs and other traffic.”

Meanwhile, the mule deer (above) population has plummeted in the basin and surrounding White River area, dropping from 105,860 in 2005 to 37,530 in 2014, according to Colorado Parks and Wildlife data. While most of these lands remain in federal hands, the drilling has resulted in a de facto takeover by industry—providing a glimpse of what could happen under state control.

On the positive side, the state-control movement has united and mobilized sportsmen and women nationwide. In New Mexico, public-lands-transfer legislation was defeated following a rally organized by the New Mexico Wildlife Federation last January. In Idaho, hunters set up a replica of an elk-hunting camp on the grounds of the capitol last February and rallied against public-lands-takeover legislation. In Wyoming the same month, more than 100 sportsmen and women hosted a legislative reception to highlight the importance of public lands to the state’s economy, tourism and world-class fish and wildlife populations. Similar rallies occurred in Colorado, Nevada and elsewhere around the West.

“Sportsmen have always been some of the country’s strongest conservationists due to their intimacy with the land and the animals as well as their economic contributions,” says Aaron Kindle, NWF’s western sportsmen’s campaign manager. Nearly all sportsmen in the West rely on public lands, which hold some of country’s greatest big-game herds and blue-ribbon fisheries. In addition, federal excise taxes on sales of hunting and fishing gear generate hundreds of millions of dollars in funds for wildlife conservation and land acquisition. “Losing access to public lands would decimate the economies of many rural towns that draw in sportsmen,” Kindle says. “Some rural business owners make half of their yearly revenue during hunting season alone.” 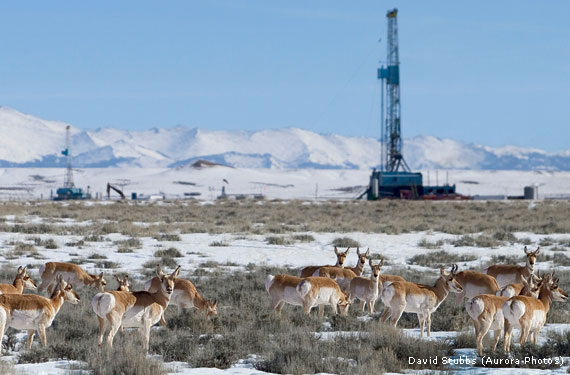 Though the lands at stake are mainly in the West, eastern affiliates are engaged as well. The Tennessee Wildlife Federation helped defeat a state resolution that supported giving western public lands to states. Likewise, the Federation is partnering with affiliates in West Virginia, Pennsylvania, South Carolina and Wisconsin. The fight also is taking place in Washington, D.C., where NWF is working to defeat a range of bills to defund agencies that oversee and regulate energy development and other extractive industries on public lands.

“The current system is far from perfect,” admits France, who understands why some people are frustrated by federal management of public lands. “Federal laws require lengthy public comment periods on land-management decisions. Sometimes this process is laborious. But at least there is a discussion. Better decisions take time.”

“The solution to people’s frustrations is not to throw out the federal government,” says Clare Bastable, NWF’s public lands program director. States lack the money, personnel and expertise of federal agencies, she says. Rather than disposing of public lands, Congress should reinstate funding to agencies to improve access for recreation, hunting and fishing and restoration of wildlife habitat. “The solution,” Bastable says, “is to provide the federal government with enough funds to better manage public lands for the benefit of all Americans.”

Rebecca Brown, the Montana college student, sums up the spirit of the struggle: “All Americans, even if they aren’t fortunate enough to live here, deserve to have our public lands protected.” 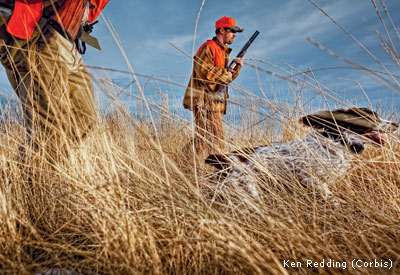 For decades, the National Wildlife Federation and its affiliates have been at the forefront of fights to “keep public lands in public hands.”

In addition, NWF works to secure designations of new public lands and to ensure they are adequately funded and protected from irresponsible energy and other development. These landscapes are “particularly important for large wildlife species that require large habitats,” says Mike Leahy, the Federation’s senior manager for pubic lands conservation and sportsmen’s policy. “They also provide some of America’s best hunting, fishing and wildlife-watching opportunities.”

Based in Washington state, Paul Tolmé wrote about western drought in the August-September 2015 issue.