Keeping the Wild in Wildlife Photography 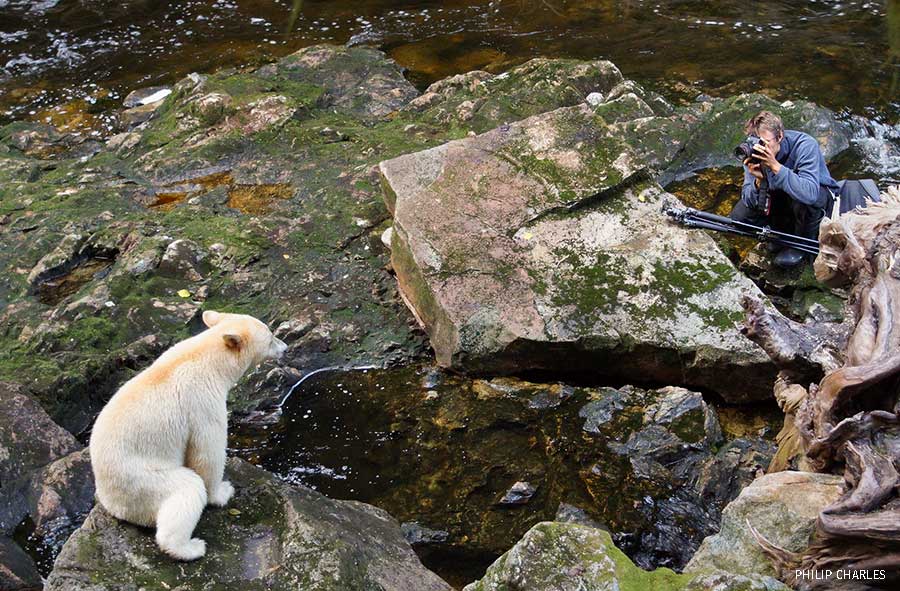 Too close for comfort, a photographer in British Columbia zeros in on a young spirit bear, disrupting its chance to feed on fish in the river and blocking its exit route. "The bear's pinned-back ears are a clear sign of stress," says photographer Philip Charles, who routinely takes pictures here from farther away. After watching this face-off "with gritted teeth," Charles coaxed the intruder to leave.

WHEN I FIRST STARTED PHOTOGRAPHING WILDLIFE a few years ago, I went with a friend to a park in Florida to try to capture images of barred owls. By playing recorded barred-owl calls, we soon lured in a beautiful owl and got some excellent shots. But the bird also circled the area in great agitation, searching for its vocal competitor.

At the time, I didn’t think about how those recordings might be stressing the owl or about the energy it expended flying from tree to tree. I didn’t consider whether it was nesting season, when drawing the owl away from its nest might have left its young vulnerable to predation. And I didn’t think about whether the recordings might have attracted a hawk that could have attacked the owl.

Since then, I’ve learned a lot about what to do—and not do—when photographing animals in the wild. Because of my interest in photography ethics, I’ve worked with the National Audubon Society, North American Nature Photography Association and National Wildlife magazine to help create guidelines that encourage photographers to place the welfare of animals above the desire for great photos. But this issue of ethics can be controversial, especially today.

The proliferation of high-quality digital cameras, photography workshops, photo contests, photo websites and social-media postings have made the pursuit of stunning wildlife images a hugely popular pastime. Yet as more people compete for pictures, some cut corners or put species at risk in pursuit of the perfect shot.

Further complicating the issue, photographers often disagree about what constitutes ethical behavior in the field. Though guidelines will continue to evolve, here are some general rules based on sound science, common sense and compassion.

Know your subjects. Before you approach an animal in the field, it is important to learn about its natural history, such as nesting and breeding seasons, foraging behaviors, need for space and signs of stress. These vary by species. Alarm calls, pinned-back ears (such as on the spirit bear, above), wide eyes, freezing or flushing may indicate stress. If you see such signals, you should back away.

Keep your distance. An animal’s need for space depends on species, location and whether offspring are near. Kingfishers and kestrels, for example, are skittish, sensitive nesters that need considerable space. Using telephoto lenses and pop-up blinds can help you keep a respectful distance or remain relatively invisible, reducing an animal’s stress. Camera traps, remote triggers and even drones will limit your physical proximity—though drones raise their own ethical questions if they harass wildlife.

Feeding vs. baiting. Using food to entice wild animals is one of the toughest ethical issues of our profession. Backyard bird feeders are generally fine if they’re clean, stocked with appropriate foods and placed with the birds’ safety in mind. But baiting owls and other raptors with mice or lures is unethical because it habituates the birds to people, changing their behavior and potentially putting them at risk from vehicle collisions, harassment and other dangers.

Placing a carcass in a remote area where wolves or bears range may be fine on occasion, especially if done to help research or habitat conservation. But routine feeding can lead these or other species of predators to associate people with food, earning them labels as “problem animals” that may then be killed. Ultimately, any baiting that creates risk for an animal should be avoided.

Vocal lures. As I learned in Florida, using vocal recordings can be problematic. According to new guidelines at the National Audubon Society, such recordings “should be used sparingly, and not at all in the case of endangered birds or birds at critical points in their nesting cycle.”


Safeguard locations. In this day of instant messaging, news travels fast. Careful judgment in sharing animal locations is crucial, particularly for species like snowy owls that attract crowds of photographers, some of whom will bait or flush the birds to get action shots—a form of harassment.

Game farms. Some people pay to photograph elusive animals such as cougars and lynxes at game farms, where captive animals are posed for photos. Critics like photographer Thomas Mangelsen cite concerns about poor conditions at some game farms and fears that their formulaic photos cheapen the market, deceive photo buyers and devalue the work of field photographers. I agree. Yet some publishers feel that game-farm photos in products such as calendars or greeting cards may help inspire and fund conservation. If such images are used, they should be honestly labeled as “captive” or “controlled.”

Earn public trust. Truth in captioning is vital to the discussion of ethics. Photographers who disclose how they got a picture will earn the trust of publishers and the public. That’s more valuable than money or fame, says Peter Mather, a fellow with the International League of Conservation Photographers. “We do this work so we can speak for wildlife and wild places, so we can share the beauty,” he says. That beauty has more power when captured in an ethical way.

To demonstrate how misleading game-farm photography can be, Andrew Geiger shows two views of the same photo. Up close, the wolf peering through trees seems like a lucky shot in the wild. But zoom out and you'll see a handler enticing the wolf to pose.

Photographer Melissa Groo is on the Ethics Committee of the North American Nature Photography Association.