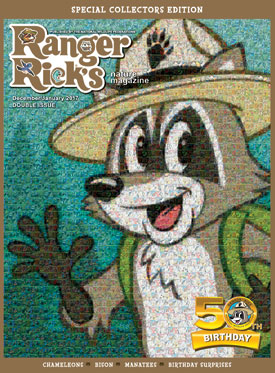 DID YOU KNOW THAT CHEETAHS CAN'T ROAR? That orangutans are ticklish? That sharks don’t get cavities? These are just a few of the 50 fun facts appearing in the next issue of Ranger Rick® magazine, which celebrates its 50th birthday in 2017.

When the National Wildlife Federation launched Ranger Rick’s Nature Magazine in early 1967, the Federation intended it to be “the finest children’s magazine in history,” a mix of photographs, games, stories, science and crafts to “keep young minds actively growing” and inspire “an appreciation of nature.” Fifty years later, scores of Parents’ Choice Awards and countless testimonials from fans suggest that Rick has hit the mark.

“I grew up reading Ranger Rick,” says Amy Chellino of Shorewood, Illinois. Today, her daughter Phoebe (11) and son Jonah (8) read it, too. For Phoebe, the magazine provides “a better understanding of nature and how to treat it right.” Jonah adds, “I want to make the Earth to be safe for animals so they will not be extinct.”

Inspired by Ranger Rick, many young readers like Phoebe and Jonah go on to become conservationists. “I get letters all the time from people who grew up with Ranger Rick and now are biologists or ecologists,” says NWF Children’s Publications Editorial Director Mary Dalheim. “That’s very rewarding because one of our goals is to inspire a lasting commitment to environmental stewardship.”

Rick’s family of friends has grown along with NWF’s publications for children. While Ranger Rick is geared toward 7-to-12-year-olds, Ranger Rick Jr.® is for kids 4 to 7, and a brand new magazine called Ranger Rick Cub™ is for ages 0 to 4. “We now have a nature magazine perfect for every stage of a child’s life,” says Dalheim.

Rick’s look also has changed over time. Award-winning artist Parker Jacobs recently created the new look inspired by an old sticker showing Rick’s “sparkly, happy face. He is excited about wildlife and the world we’ve been given to live in,” Jacobs says, “and he wants to share it.

After more than 600 issues, Ranger Rick has shared that world with millions of Americans. Aly Robson (10) of New York is one of them. “If kids learn how to protect the world when they’re young,” she says, “maybe when they grow up they’ll be able to treat animals and plants better than people do now.” No wonder Rick is smiling. 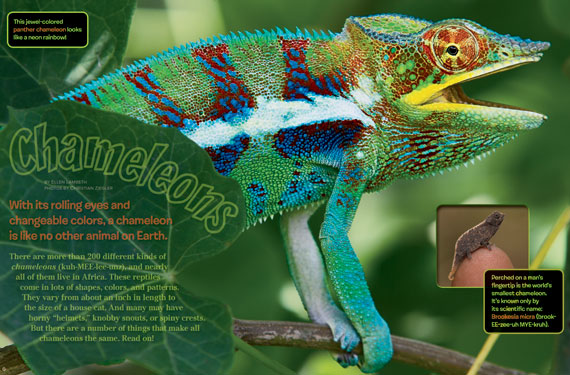 The 50th birthday cover of Ranger Rick magazine (top)—composed of 141 tiny covers—shows the original title and Rick’s new look. Inside, an article about chameleons (above) typifies the stunning photography and fun facts that captivate and educate kids.