Creating a Haven for Beneficial Bugs 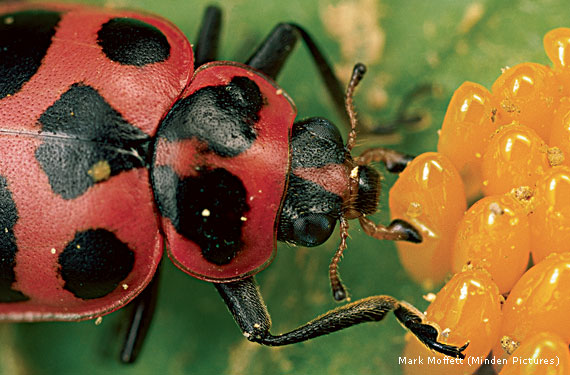 A spotted lady beetle feasts on eggs of the Colorado potato beetle, a major crop pest. Predators such as lady beetles can be effective alternatives to harmful insecticides.

Insects such as these kill plant pests, from aphids and mealybugs to slugs and spider mites. They also form an essential component of backyard biodiversity, says Thelma Heidel-Baker, the Xerces Society for Invertebrate Conservation’s specialist on “conservation biocontrol,” a growing field that aims to improve habitat for enemies of pests that ravage both crops and prized garden plants.

Some of these beneficial insects are predators. Convergent lady beetles, for example, can gobble down an aphid infestation for breakfast, while ground beetles can devour a juicy slug for dinner. Others are parasitoids that have immature life stages, usually larvae, that develop on or inside a victim and ultimately kill it. These insects include some wasps and tachinid flies, whose tiny maggots feed internally on and destroy a variety of pests, including leafrollers, fall armyworms and sunflower moths.

To attract and keep predators and parasitoids on patrol in your yard, “one of the first things you want to do,” Heidel-Baker says, “is have a constant supply of blooms all season long” to provide a steady supply of nectar, which most beneficial insects also eat. Unlike butterflies, which have long “tongues” and sip nectar from deep-throated blossoms, many predatory insects require blooms with short nectar tubes. Daisy-shaped native wildflowers such as asters, sunflowers and coneflowers, which have tiny floral tubes, are champions at attracting the insects.

“Culinary herbs can be great resources for these insects, too,” Heidel-Baker says, especially species such as dill, parsley and chervil, called “umbelliferous” in botanical lingo because they have flowers that resemble upside-down umbrellas.

Make sure to provide protected places where your pest control accomplices can safely rest, lay eggs and overwinter, advises National Wildlife Federation Naturalist David Mizejewski. Supply plants of various types and heights, from ground-hugging grasses to shrubs and tall trees. In addition, “tree snags and brush piles are havens for overwintering predators and parasitoids as well as for pollinators such as bees,” he says.

“The last, really critical piece of creating habitat for predatory insects is it has to be protected from pesticides,” Heidel-Baker adds. Many chemical pesticides are as deadly to beneficial insects as they are to pests. Instead of dousing your plants with dangerous poisons, let backyard biodiversity naturally nip potential pest problems in the bud.