Snakes in your yard? They may be up to something unexpected—and helpful to plants 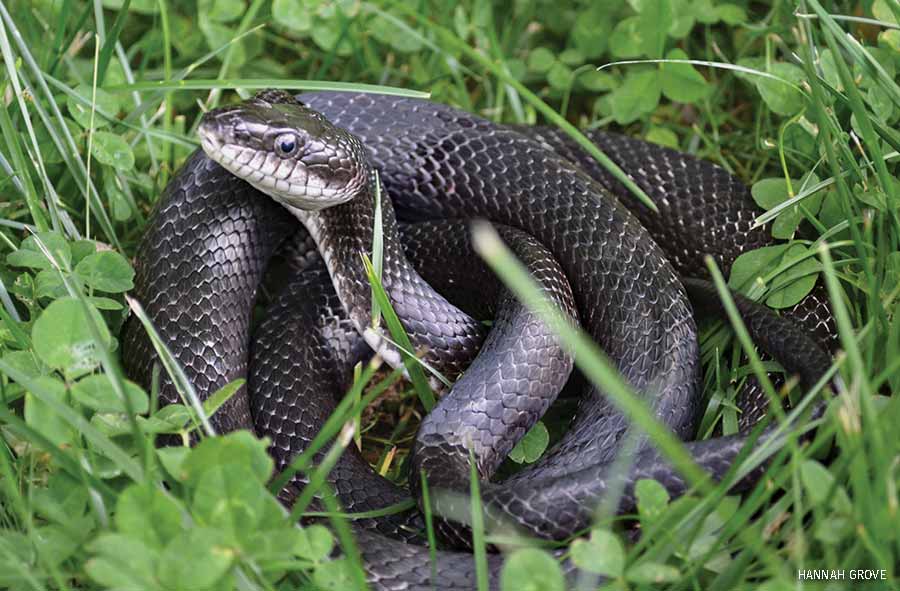 Coiled in a patch of clover, an eastern rat snake poses no threat to gardeners and helps control rodent pests. Some snakes may even spread seeds, aiding biodiversity.

VETERAN HERPETOLOGIST Randall Reiserer has studied snakes for decades, but even he was surprised by what he saw in the guts of rattlesnakes: lots of seeds, some of them even starting to sprout.

“Snakes produce powerful digestive acids,” says Reiserer, so most people assumed there would be nothing in the gut but “mush.” Curious to learn more, Reiserer worked with collaborators to examine 50 rattlesnake specimens from the Museum of Vertebrate Zoology at the University of California–Berkeley. Along with “lots of identifiable bits” of prey—chiefly rodent hair and teeth—they found 971 seeds from 14 different plant species, including 19 seeds that had begun to germinate in the rattlers’ lower intestines. So as they feed on seed-loving rodents, rattlesnakes incidentally acquire a crucial role in the lives of plants: They become seed spreaders.

Snakes—including familiar garden visitors like rat snakes, kingsnakes and corn snakes—swallow their prey whole and head first, which means all the seeds stuffed in the cheek pouches of a hapless chipmunk, for instance, go down the hatch without damage from chewing. Snake digestive enzymes are great at dissolving flesh but have no effect on the cellulose structures of seeds, which pass through the gut unharmed.

Gut transit time can take two or three weeks. And since snakes usually occupy much larger home ranges than their rodent prey, often traveling two to three miles in just a few days, the seeds travel long distances, too. When they’re finally passed, Reiserer says, the seeds “come out in this nice little pile of snake-poop fertilizer. Some have even germinated, which gives them a head start getting established.”

Reiserer is confident that the patterns he’s found in rattlesnakes will hold true for other snakes as well, so the potential contribution of snake-driven seed dispersal in maintaining the health and genetic diversity of plant communities is tremendous. “In the next few years, I expect we’ll learn even more about the critical ecosystem services that snakes provide,” Reiserer says.

But can people be taught to look kindly on the serpents in their gardens? National Wildlife Federation Naturalist David Mizejewski hopes so, because “the majority of snakes are 100 percent harmless to people.” A snake curled in a tangle of greenery isn’t plotting to attack an unwary gardener. “All they’re trying to do is hide from you,” says Mizejewski, and from the many predators that feed on snakes.

Many of these shy creatures help around the yard by controlling rodent populations. Some, such as garter snakes, also eat garden pests, including grasshoppers and slugs. And since we now know that some species also help spread seeds, says Mizejewski, “it’s time to show snakes some love.”