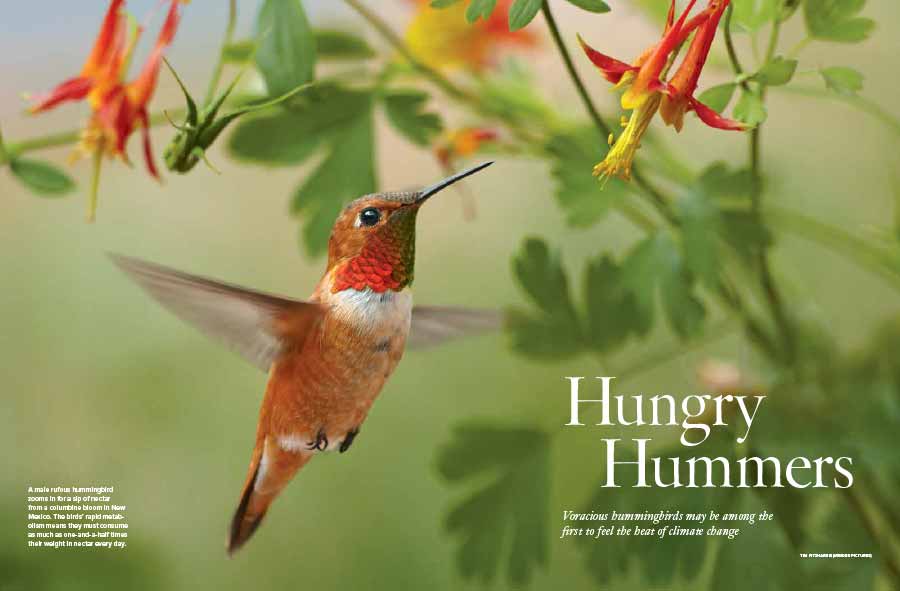 A male rufous hummingbird zooms in for a sip of nectar from a columbine bloom in New Mexico. The birds’ rapid metabolism means they must consume as much as one-and-a-half times their weight in nectar every day. Preparing to band it and take its measurements, a researcher holds a male Rivoli’s hummingbird (below).

OUTSIDE A HISTORIC COTTAGE within shouting distance of southeastern Arizona’s San Pedro River, ornithologist Sheri Williamson sat beneath a broad metal shelter cupping a tiny rufous hummingbird in her hand. Surrounded by the trappings of her trade—a scale to weigh birds, a caliper to measure them, a clipboard of data sheets and an assortment of numbered bands forged from ultra-light aluminum alloy—she gently lifted the bird’s tarsus (equivalent to the human foot bone) from its belly plumage. Holding specially designed pliers, Williamson used her other hand to carefully squeeze a band around the leg, which was as slender as a blade of grass.

Behind Williamson, brilliant flashes of color began to appear in the gathering dusk. Soon, they came into focus as more hummingbirds—another rust-colored rufous, a half-dozen black-chinned and a single Anna’s, black eyes fierce beneath an iridescent, crimson forehead—all of them flitting among red plastic sugar-water feeders. 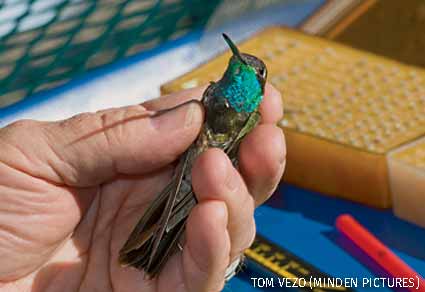 The crowd of hummers gathered here was not surprising: North America’s greatest diversity of hummingbirds is found along the U.S.–Mexico border. Southeastern Arizona alone hosts up to 15 different species during the migration season, which peaks from early April through late September.

What brings so many hummers to this part of the country? “Location, location, location,” explains Williamson, who, with her husband Tom Wood, operates the small, nonprofit Southeastern Arizona Bird Observatory in Bisbee . “Several different bioregions come together in this area—along with the food resources they provide—and we’re within commuting distance of the Tropics, where a lot of these birds spend the winter.” During summer, after traveling up to 2,500 miles one way, the birds breed across the continent, some as far north as Alaska and Canada.

This great gathering of hummingbirds also makes southeastern Arizona a hotspot for hummingbird researchers. These days, much of that research focuses on the potential effects climate change may have on the birds. Like most wildlife, hummingbirds have long faced the dangers posed by habitat loss and fragmentation. Yet many experts now consider climate change to be the leading threat to these much beloved birds—known to John James Audubon as “glittering fragments of the rainbow.”

Hummingbirds’ biology makes them particularly vulnerable to climate change. Weighing little more than a few dimes stacked together, a hummingbird is about as small as an animal can be and remain endothermic (or “warm-blooded”)—capable of maintaining a stable body temperature independent of the surrounding environment. Their small size means hummers have limited tolerance for high-temperature extremes. During heat waves, they can be forced to seek shade rather than foraging for food. 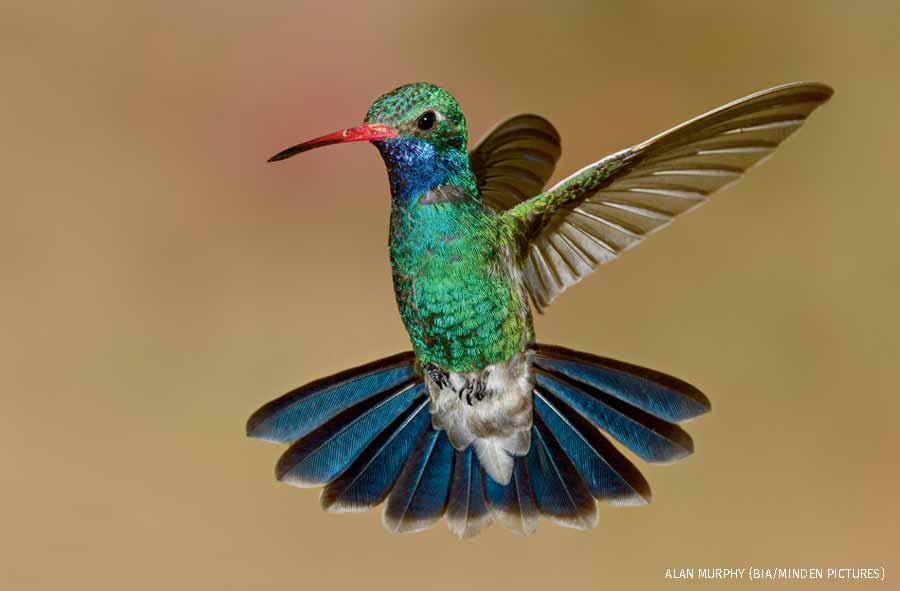 A male broad-billed hummingbird takes flight in southeastern Arizona, a region that hosts up to 15 hummer species, making the area a hotspot for research.

The need to feed

Hummingbirds have one of the highest metabolic rates in the animal kingdom, with the fastest heartbeat of any bird species: nearly 500 beats per minute while resting and up to 1,200 beats when in action. This high-octane lifestyle means hummers must consume as much as one-and-a-half times their body weight in nectar every day. “Being a hummingbird is like driving a car with a one-gallon gas tank,” writes David Lazaroff in The Secret Lives of Hummingbirds. “There is an almost constant need to refuel.”

The need to refuel is particularly acute during the birds’ long migratory journeys. Scientists say climate change is now threatening the availability of that fuel. One problem is that an increasing number of weather extremes tied to global warming—including droughts, snap freezes, hail and high winds—can kill or reduce the number of nectar-producing plants that hummers need.

Rising temperatures also can prompt flowering plants to begin blooming before the birds arrive at their breeding or migratory stopover sites. Because they burn off fuel so fast, hummingbirds cannot just fly to the next lunch stop as many other birds can. 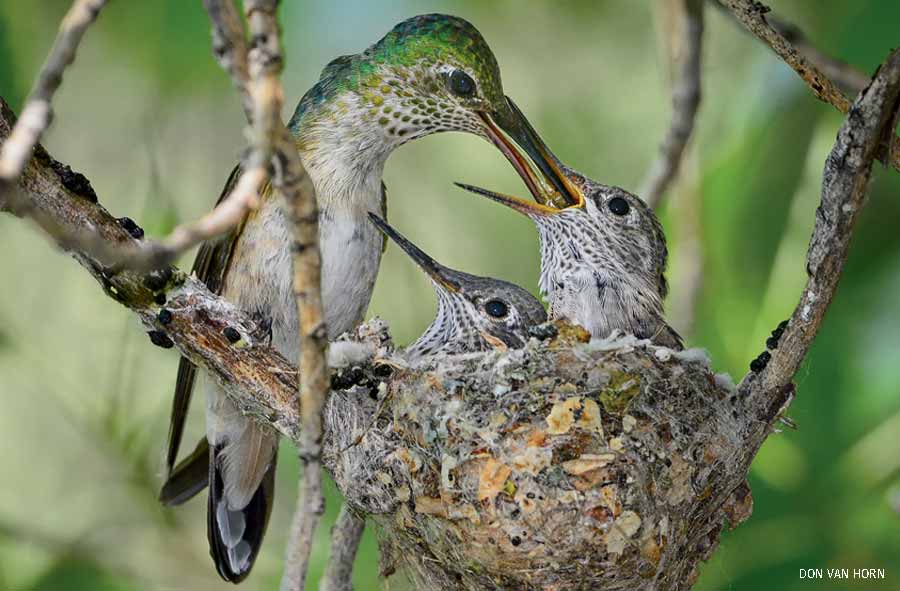 A female broad-tailed hummingbird feeds chicks in Colorado, where nectar-producing glacier lilies flower about 17 days earlier than in the 1970s. If this shift continues, the birds may arrive one spring to find that the lilies—a key food source—are done blooming.

Yet pinpointing how climate change is affecting hummingbirds is tricky. Because of their tiny size, frenetic flight and vocalizations that can be so soft humans cannot hear them, hummers rarely show up in traditional bird surveys. In addition, their intelligence and maneuverability help hummers fly over, under or around the mist nets ornithologists typically use to capture and band birds. Instead, researchers must attract hummingbirds to feeders in order to trap them—and even that method can prove unreliable if nearby flowering plants draw many of the birds away from feeders.

When Williamson and her colleagues do catch a bird and—very briefly—detain it, they first band the animal and then quickly record its vital statistics. These include tail, wing and bill lengths, species identification, age, gender and weight. If a hummingbird has been banded before, the researchers also record the numbers printed on the band, which, by allowing comparisons with previous data on the same bird, can help scientists learn how long hummers survive as well as where they breed and the routes they take during migration. 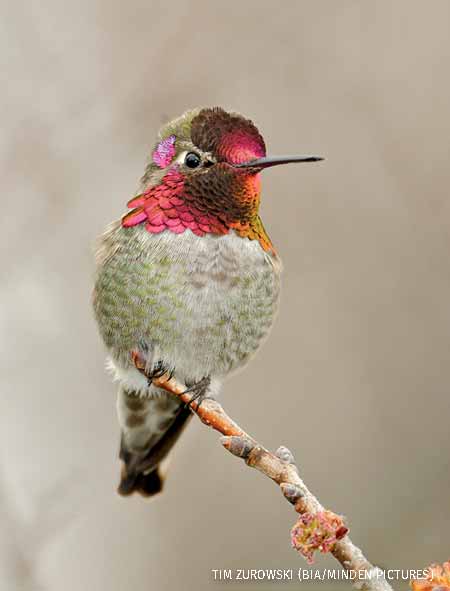 During the nearly two decades Williamson has been gathering data at San Pedro, she has observed a number of population ups and downs among several hummingbird species. But more years of research are necessary, she points out, “to distinguish ‘normal,’ short-term weather effects from long-term trends that would implicate climate change.”

Still, Williamson has detected signs of changing climate through shifts in migration patterns she has observed. “In the first few years, we would catch very few or no birds the first week of April,” she says. “In recent years, capture rates the last week of March are comparable to early April captures two decades ago.” She attributes these earlier arrivals to higher temperatures along migration routes that make food (nectar and insects) available sooner.

Assuming these early birds also arrive and find food sooner in their breeding grounds, “males may nab higher-quality territories, which may enhance survival and reproduction,” Williamson says. Yet the birds “remain vulnerable to erratic spring weather that can turn from balmy to frosty in hours,” she adds. “While hummingbirds can survive extremely cold temperatures for short periods, the flowers and arthropods they feed on are not as tough.”

But hummers that stick with their traditional migration schedules are also at risk—if rising temperatures cause the nectar-producing plants the birds need to nest and raise their young to begin blooming too early. In response to climate change, “we know that the timing of flowering is changing,” says University of Maryland biologist David Inouye. “Typically, it is getting earlier.” Long-distance migrants such as hummingbirds “have to navigate maybe a couple thousand miles and arrive at their destinations before the floral resources they depend on for successful breeding disappear,” he says. But because climate change affects different geographic regions differently, the chances of mismatches in timing between the birds’ arrival and food availability are increasing. 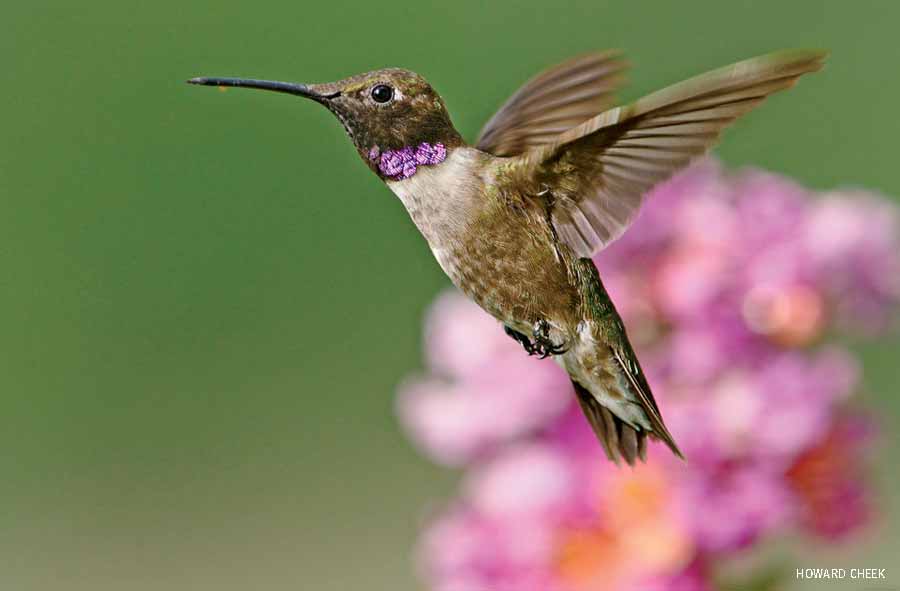 Anna’s (above right) and black-chinned hummingbirds are among more than a dozen hummingbird species that breed in the United States. While scientists have discovered worrisome population fluctuations, no U.S. hummers have been listed as endangered.

To investigate whether such mismatches already are occurring, Inouye and his colleagues analyzed several decades of data on bloom times of nectar plants fed upon by broad-tailed hummingbirds, long-distance migrants that winter in Central America and breed at high elevation across the western United States. While flowering times of key food plants remained about the same at the southern portion of the bird’s range, at higher latitudes, the scientists discovered that glacier lilies—a critical early-season nectar source—are blooming about 17 days earlier now than they did in the 1970s. If the trend continues, the scientists write in the journal Ecology, “hummingbirds will eventually arrive at northern breeding grounds after flowering begins, which could reduce their nesting success.”

Might broad-tails and other hummingbirds be able to adapt to changes in flowering times by postponing migration? Hummingbirds, after all, are known for their remarkable ability to remember details such as the location and nectar content of flowers. Whatever the answer, which may not be known for many decades, it’s certain that researchers such as Williamson and those who follow her will be there on the front lines to find out.

Tim Vanderpool is a writer in Tucson, Arizona.