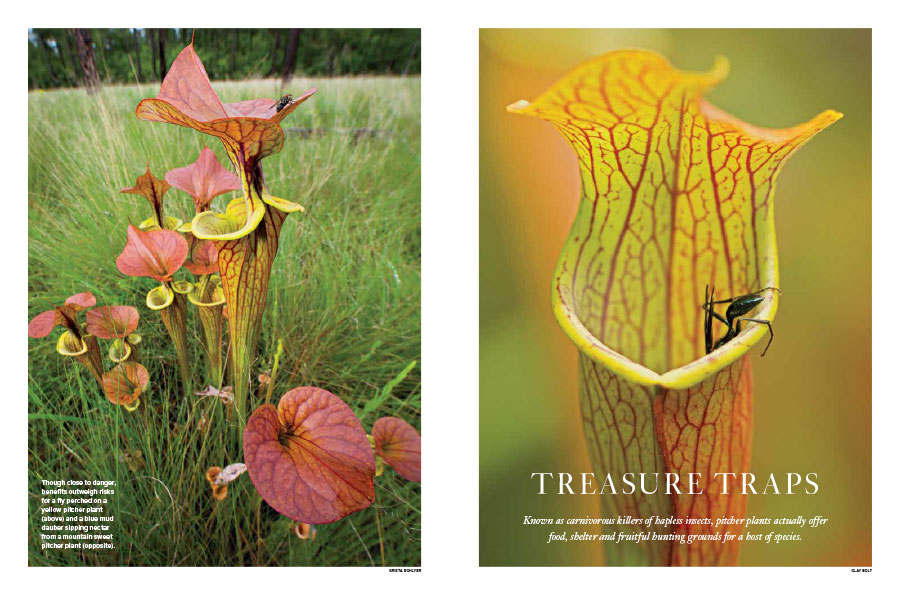 Though close to danger, benefits outweigh risks for a fly perched on a yellow pitcher plant (left) and a blue mud dauber sipping nectar from a mountain sweet pitcher plant (right).

PITCHER PLANTS are among nature’s greatest marvels. Denizens of boggy, sandy or other nutrient-poor soils, they have evolved the power to attract—by color, fragrance and nectar—insects that then fall into fluid-filled chambers and drown. By digesting this prey, pitchers get nutrients other plants must absorb through their roots. “It has allowed them to thrive where there is little competition,” says photographer Krista Schlyer. But some potential prey have evolved their own tricks: “adaptations letting them cheat death while exploiting the plants for their own benefit” as food, shelter or hunting grounds, says Schlyer’s colleague, Clay Bolt. Here we share images the two photographers have made of these remarkable animals and plants. 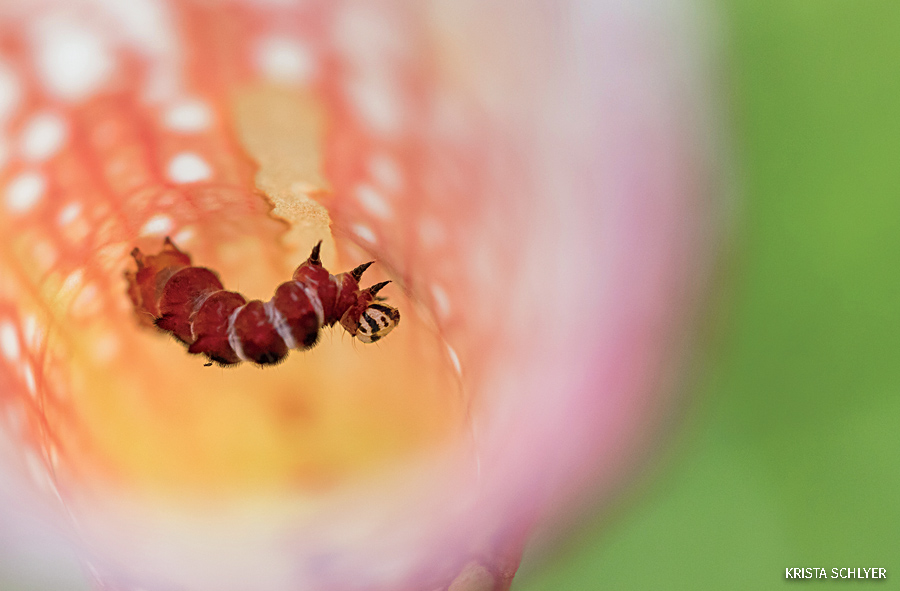 NESTLED IN A WHITE-topped pitcher plant in Alabama, a caterpillar of the pitcher plant moth leaves a pattern behind showing where it has nibbled on the plant’s inner lining. Provided with both food and shelter from the elements, this species “spends nearly its entire life inside a pitcher plant,” Schlyer says. 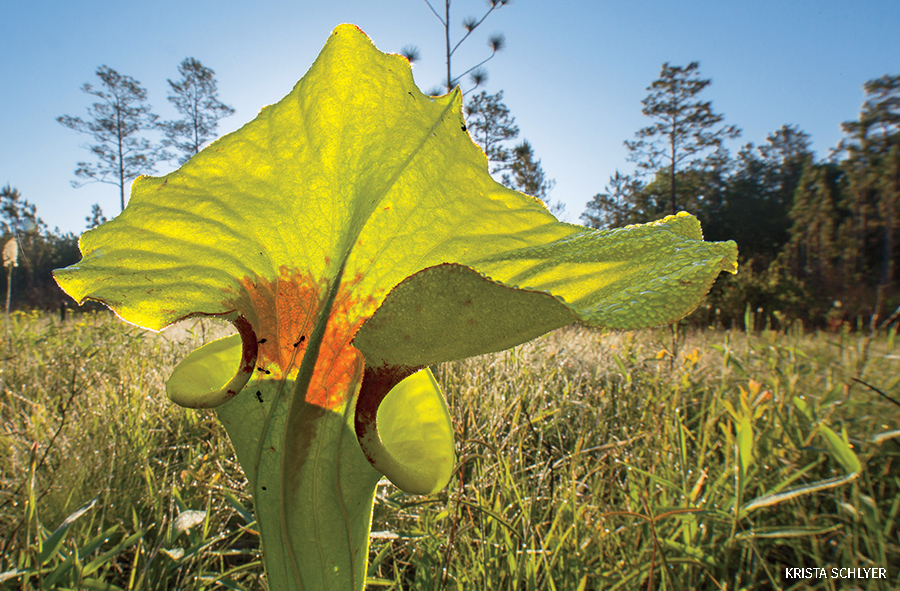 BACKLIT BY BRIGHT Alabama sunshine, ants forage for nourishing nectar on a yellow pitcher plant in Conecuh National Forest. Sticky feet keep most of the insects safely attached. “But every so often, an ant will lose its footing and fall into the pitcher,” Schlyer says—providing the plant with its own nourishment. 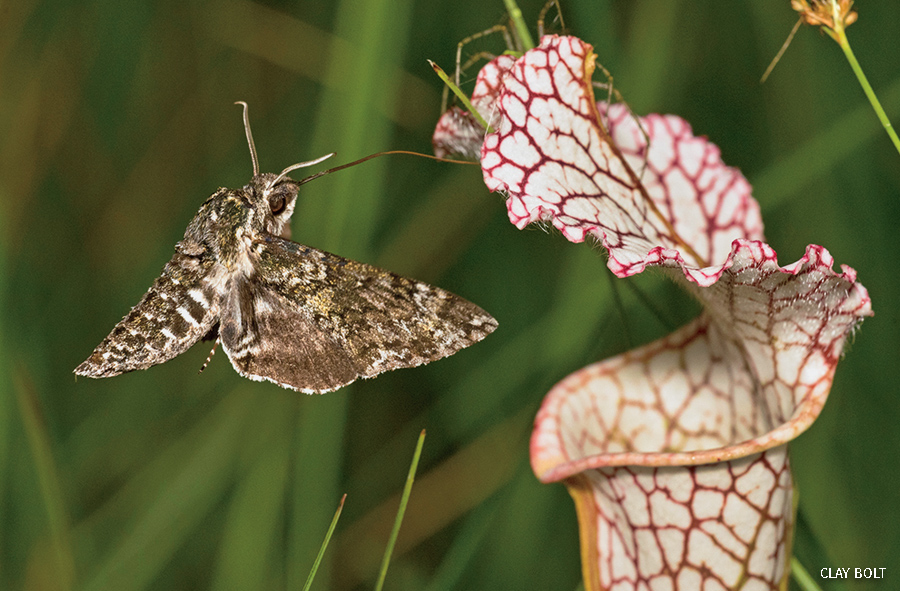 PROBOSCIS UNFURLED, a hawk moth drinks nectar while keeping a safe distance from a white-topped pitcher plant in Alabama’s Conecuh National Forest. Though he’d spent considerable time photographing pitcher plants in this forest, Bolt had “never before seen a hawk moth nectaring from one of them.” 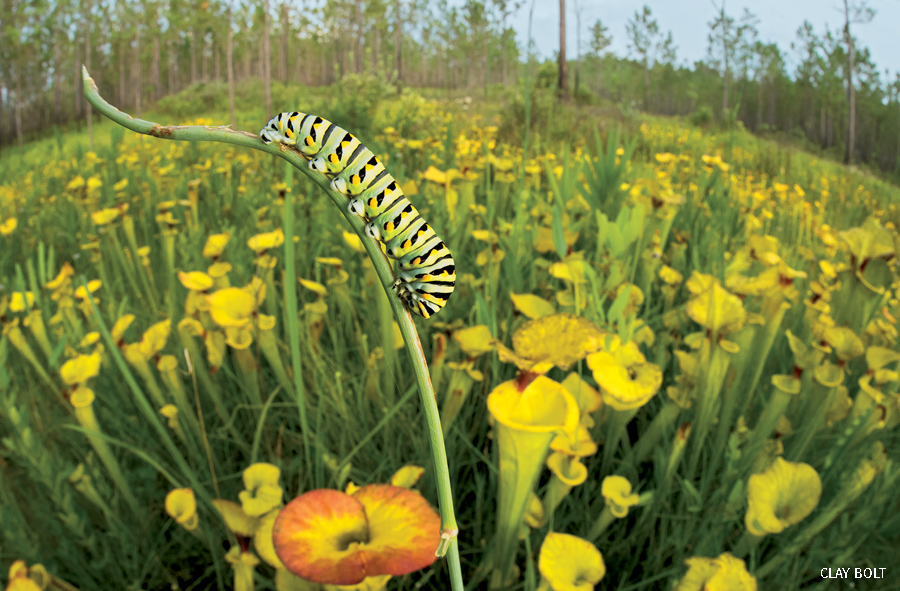 A BLACK SWALLOWTAIL caterpillar feeds in a bog of yellow pitcher plants in Alabama’s Conecuh National Forest. Thriving in soil that is nutrient poor, the pitchers turn what could have been a sterile landscape into “a rich and vibrant community that hosts a diversity of animal species,” says Bolt. 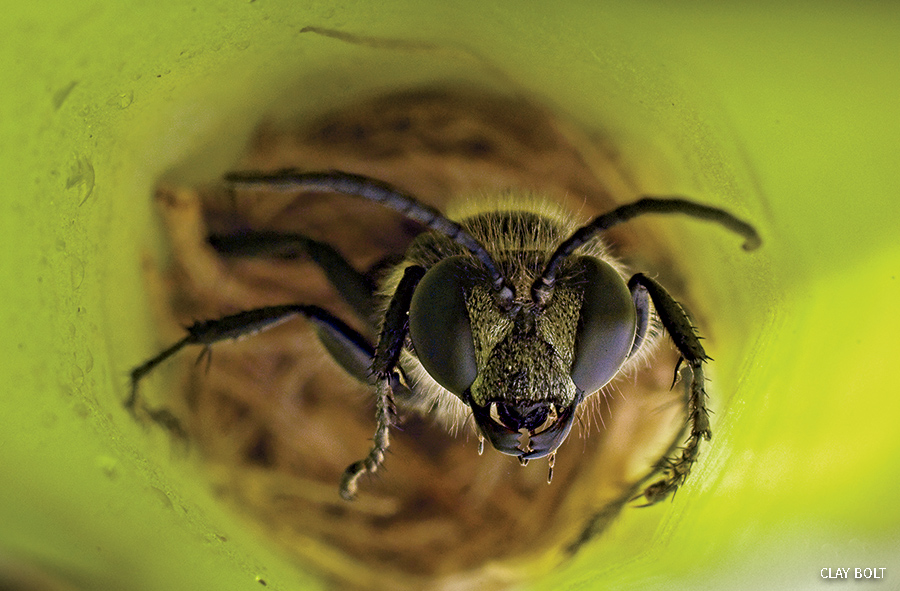 HUNTER OF KATYDIDS and crickets, a grass-carrying wasp peers from a yellow pitcher plant where she’s building a nest in North Carolina’s Green Swamp—most likely the first time the behavior has been photographed, says Bolt. When she’s done, the pitcher will be filled with grass and dead prey for her young. 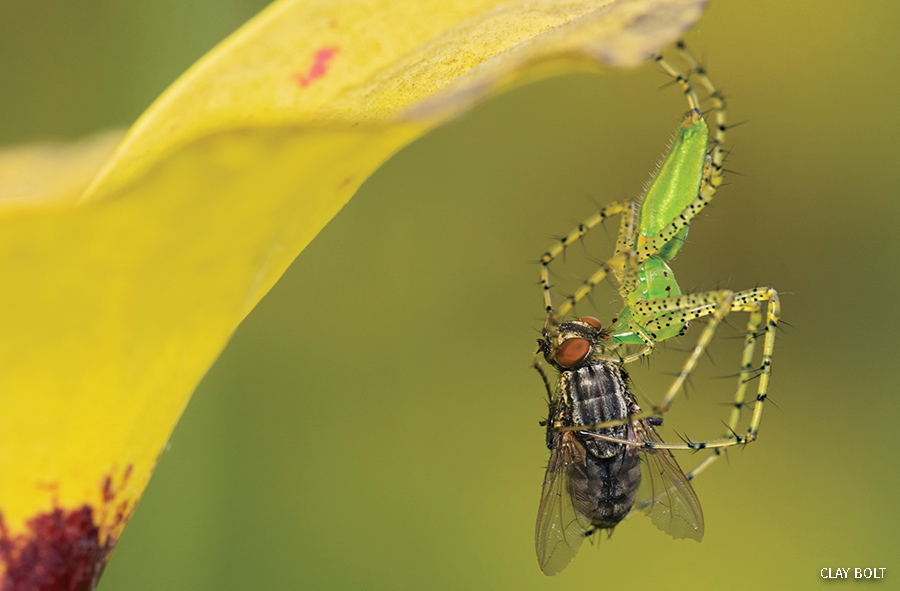 NABBED BY A GREEN lynx spider on a yellow pitcher plant in Alabama, a pitcher plant flesh fly “on balance, may benefit from losing its life,” says Bolt, because the insects lay their eggs in the plants. Larvae that hatch from the eggs can withstand the powerful enzymes the plant produces to digest other insects. 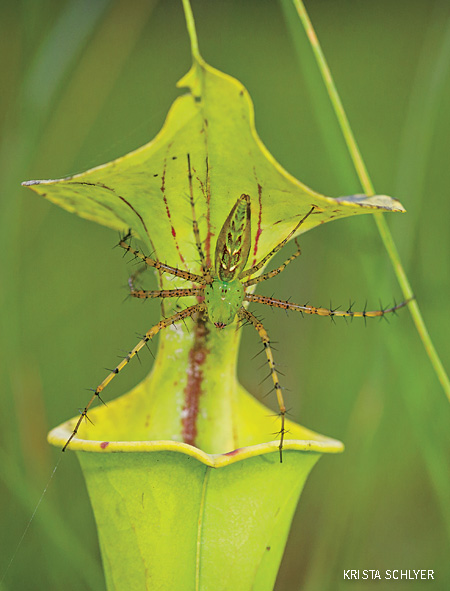 ARMED AND DANGEROUS, a green lynx spider waits for prey on a pitcher plant in North Carolina’s Green Swamp. To better its chances, this predator can change its coloring to match the background. Schlyer, who admits to “a bit of arachnophobia,” once missed a spider that was “just inches from my face.” 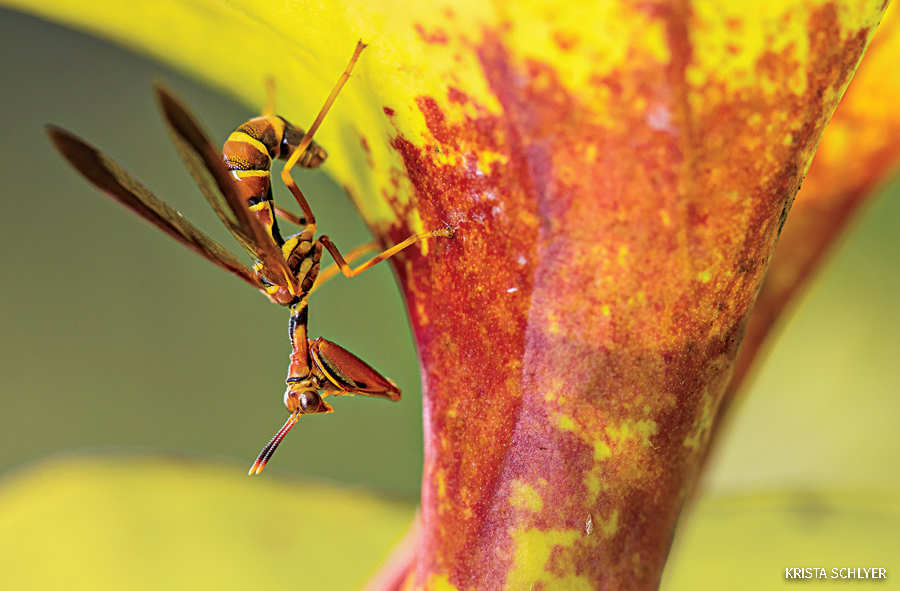 LOOKING LIKE A CROSS between a wasp and a mantis, this mantidfly is ideally suited to life on a yellow pitcher plant. Not only do the predators use the plants as hunting grounds, their larvae parasitize and eat the eggs of spiders drawn to the pitchers—highlighting the complexity of these amazing plants.

Being There for Native Bees »
Fireflies: Bringing Back the Light »
Moths: Working the Night Shift »
Getting Youth to Focus on Nature »