Restoration on the Upper Mississippi benefits wildlife and hunters, yet flooding still plagues a river unnaturally steered by levees. 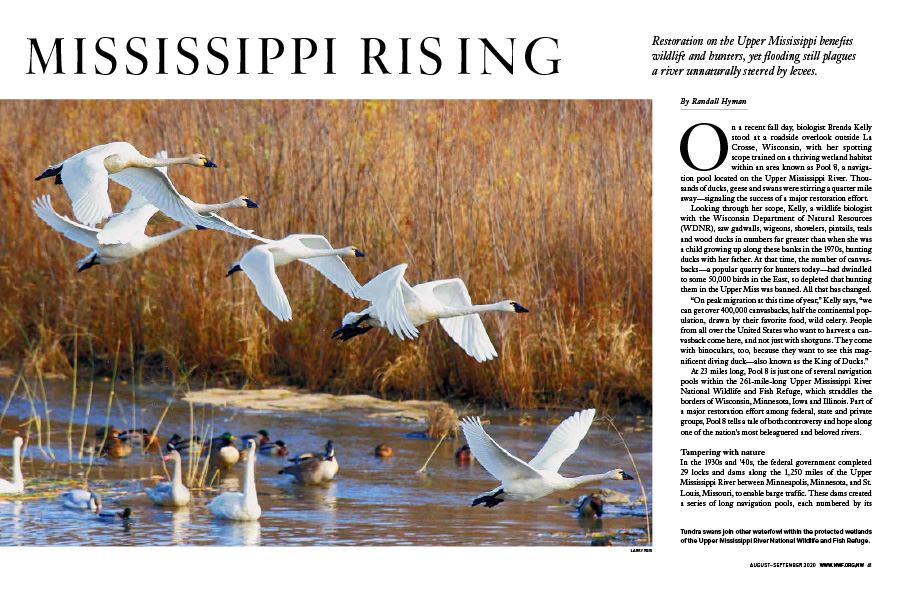 Tundra swans join other waterfowl within the protected wetlands of the Upper Mississippi River National Wildlife and Fish Refuge. (Photo by Larry Reis)

ON A RECENT FALL DAY, biologist Brenda Kelly stood at a roadside overlook outside La Crosse, Wisconsin, with her spotting scope trained on a thriving wetland habitat within an area known as Pool 8, a navigation pool located on the Upper Mississippi River. Thousands of ducks, geese and swans were stirring a quarter mile away—signaling the success of a major restoration effort.

Looking through her scope, Kelly, a wildlife biologist with the Wisconsin Department of Natural Resources (WDNR), saw gadwalls, wigeons, shovelers, pintails, teals and wood ducks in numbers far greater than when she was a child growing up along these banks in the 1970s, hunting ducks with her father. At that time, the number of canvasbacks—a popular quarry for hunters today—had dwindled to some 50,000 birds in the East, so depleted that hunting them in the Upper Miss was banned. All that has changed.

“On peak migration at this time of year,” Kelly says, “we can get over 400,000 canvasbacks, half the continental population, drawn by their favorite food, wild celery. People from all over the United States who want to harvest a canvasback come here, and not just with shotguns. They come with binoculars, too, because they want to see this magnificent diving duck—also known as the King of Ducks.”

At 23 miles long, Pool 8 is just one of several navigation pools within the 261-mile-long Upper Mississippi River National Wildlife and Fish Refuge, which straddles the borders of Wisconsin, Minnesota, Iowa and Illinois. Part of a major restoration effort among federal, state and private groups, Pool 8 tells a tale of both controversy and hope along one of the nation’s most beleaguered and beloved rivers.

Huge spring rains in 2019 led to levee breaches and record flooding along the Mississippi, drowning farms and towns such as West Alton, Missouri.

In the 1930s and ’40s, the federal government completed 29 locks and dams along the 1,250 miles of the Upper Mississippi River between Minneapolis, Minnesota, and St. Louis, Missouri, to enable barge traffic. These dams created a series of long navigation pools, each numbered by its corresponding dam north to south. These structures altered natural habitats and, in some areas, islands once characteristic of the river’s northerly stretches began disappearing.

What high water didn’t swallow, waves destroyed. The pools created long corridors of exposed water where wind fetch—the distance wind travels over water—produced high waves that tore away land and stirred up sediment. As islands within the pools eroded, aquatic vegetation critical to fish and wildlife had no buffer and began to die. Without that vegetation, birds and fish began diminishing. And as river towns and barge traffic grew, human waste and industrial effluent further tainted the waters.

The Clean Water Act of 1972 led to vast decreases in the influx of pollutants. In addition, concerns about the proposed expansion of Lock and Dam 26 near St. Louis sparked a debate over whether the river should be managed for its ecological value or navigational profits. Declaring the river both a “nationally significant” ecosystem and navigation system, Congress in 1986 established the Upper Mississippi River Restoration (UMRR) Program and allocated $33 million per year to the U.S. Army Corps of Engineers for ecosystem management and monitoring. The resulting restoration efforts—a massive collaboration among the Corps, four other federal agencies, five states, conservation groups and private citizens—marked a turning point for the Upper Miss, and Pool 8 became its showcase.

“When I started working on the river in 1990, I did my thesis on aquatic vegetation in Pool 8,” says Jim Fischer, WDNR’s Mississippi River team leader. “There was almost no vegetation in the backwaters then. It was a wide-open expanse of shallow, turbid water subject to wind and wave action uprooting plants. But over the past 20 years, we’ve seen a dramatic increase in water clarity along with the return of aquatic vegetation.”

One secret to that turnaround was island building, UMRR’s prime tool for enhancing habitat for birds and fish alike. Aerial photos taken before dams were completed in the 1930s provided much of the blueprint for replacing scores of lost islands in Pool 8. “In this area, more than 80 percent of the islands had disappeared,” says Jim Nissen, who was the La Crosse district manager in the Upper Mississippi River National Wildlife and Fish Refuge during a multi-island restoration near Brownsville, Minnesota—one of three UMRR island clusters completed in Pool 8 by 2012.

The process often begins with drawdowns—the opening of dam gates to lower pool depths. Twice in the early 2000s, the Army Corps dropped Pool 8’s level nearly a foot and a half to increase sunlight penetration to the bottom, which helps reestablish aquatic species such as arrowhead and sedges. To build new islands, contractors haul or pump in dredged material from the river’s main channel or backwaters, then stabilize new shores with rock groins or jetties and submerge parallel rock vanes that guide erosive currents away. The U.S. Geological Survey provides data analysis and modeling for the projects while state scientists monitor impacts on fish, vegetation and water quality.

To date, results have been dramatic. “If we were standing here on the Brownsville Overlook in 2005,” says Nissen, “you wouldn’t see any landmass other than just an acre of residual island. You wouldn’t see any birds ... [and] the plant beds were gone.” Now, in the fall, tundra swans teem along the rebuilt isles, gorging on submerged arrowhead tubers that provide vital starchy nutrition for migrating waterfowl. More than 30,000 tundra swans stop here to feed in Pool 8’s shallow backwaters, a spectacle that draws thousands of visitors each year.

“Pool 8 is a beautiful pool, and it’s great these projects are being done, but it’s not enough,” says Olivia Dorothy, director of American Rivers’ Upper Mississippi River Basin program. “The river continues to degrade, and unless the underlying cause—the dams—is removed, it won’t be restored. It will need continued maintenance in perpetuity and more money than it’s getting right now.”

American Rivers, the National Wildlife Federation and other groups believe that maintaining the uppermost dams for the limited tonnage transported upriver is not cost effective. If dams were removed, they argue, freight could be carried on trains or on barges with shallower drafts.

The story is even more complex downstream, where dams, levees, river training structures and agriculture have degraded riverine habitat. In places like Sny Island Levee Drainage District near Hannibal, Missouri, farmers have allegedly been building levees higher than federal limits for years to protect agricultural land, yet such levees can increase flooding, prompting others to raise their own levees.

Record rainfall last spring caused Mississippi waters to tear through levees and drown towns and habitat, including the Clarence Cannon National Wildlife Refuge downstream from the Sny district. “Everything’s leveed off,” says acting refuge manager Jared Nance. “We’ve lost so much habitat over the years that we have to go above and beyond what nature would do to create habitat for waterfowl.”

Efforts of the UMRR show that humans can go above and beyond to create habitat—sometimes with unintended consequences. A rebuilt island complex in Pool 8 near Stoddard, Wisconsin, reduced wind fetch and slowed water flow, creating healthy overwintering habitat for fish such as largemouth bass but reducing vegetation such as the wild celery that is essential to migratory ducks. In addition, says WDNR aquatic ecologist Deanne Drake, the islands “reduced water flow so much we ended up with lots of algae, which smothers native aquatic plants and creates a nuisance for boaters.”

Through trial and error, biologists and engineers are slowly learning how to help rather than hurt the river and the wildlife that depend on it. The avian abundance on the Upper Miss is a thriving example that offers hope.

Writer Randall Hyman is based in St. Louis, Missouri.