Tips on how to attract owls to your yard or neighborhood 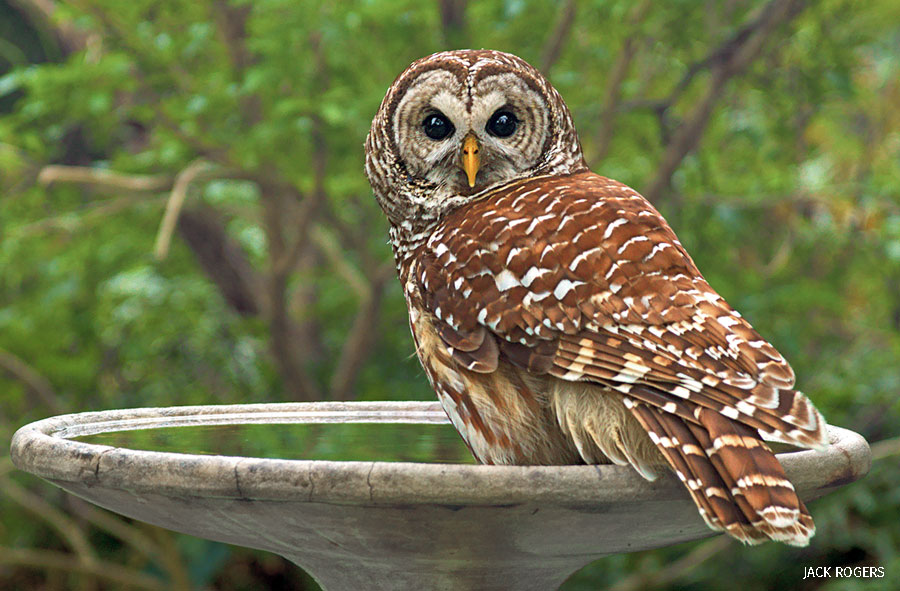 Drawn to the water of a newly cleaned birdbath, a barred owl in Florida stops by for a dip (above). In Michigan, baby eastern screech-owls (below) peek out from a wood-duck box their mom used for a nest.

WHEN JACK ROGERS LEARNED that a pair of barred owls had settled into a friend’s backyard, the Orlando-based nature photographer grabbed his camera and hurried over. Once there, Rogers made eye contact with one of the birds and considered how to lure it from its hiding spot high in the cavity of a tree at the back of the property.

“I noticed a large birdbath full of rotten leaves and debris,” he says. “I felt the owls waiting as we cleaned it, and as soon as we were done and moved away, one hopped right down.” 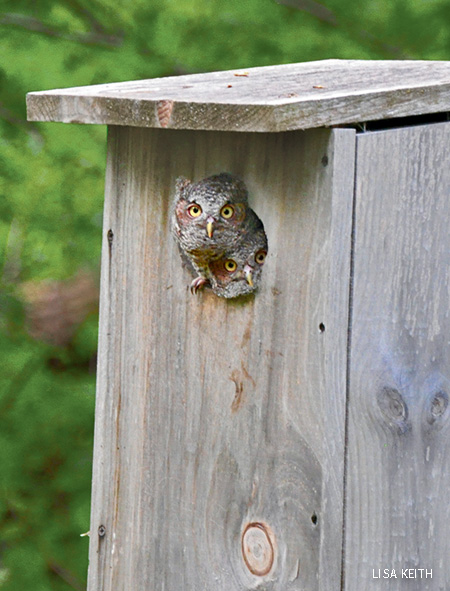 The Floridians were lucky: The yard’s dense trees and thirst-quenching water provided a hospitable setting for the owls. A welcome addition to many suburban gardens, these birds of prey are great for rodent control. Depending on their size, owls can gobble up one to three rodents a day. Bird-watchers also prize these iconic birds for their distinctive markings and expressive features.

Since owls are reclusive, they’ll usually need a little coaxing to come around. The Owl Research Institute in Charlo, Montana, recommends that birders and gardeners first learn about the species and habitats of the owls in their area. (There are 19 owl species in the United States.)

“Owls are not nest builders,” says Beth Mendelsohn, a biologist at the institute. “So we encourage homeowners not to remove dead trees or snags so owls can nest inside them.” That’s especially helpful for larger species such as barred owls. Smaller ones, including screech and barn owls, will be quite comfortable in a simple wooden nesting box that you can buy or build. Position it on a large tree 10 to 20 feet above the ground and away from the glow of exterior lights.

Food and water are also vital, so consider adding a pond, fountain or birdbath, but keep them clean to prevent spreading disease. And if you lack little rodents, entice them to join the party by creating a brush pile as far away from your house as possible.

Regarding pets: Mendelsohn says owls rarely attack them, but to be safe, keep small dogs indoors at night and always keep cats indoors to reduce predation on birds and other wildlife.

Once you’ve made things homey for owls, prepare for a mutually rewarding relationship. “They will sit on that tree and enjoy watching you just as much as you are fascinated by them,” promises Rogers.