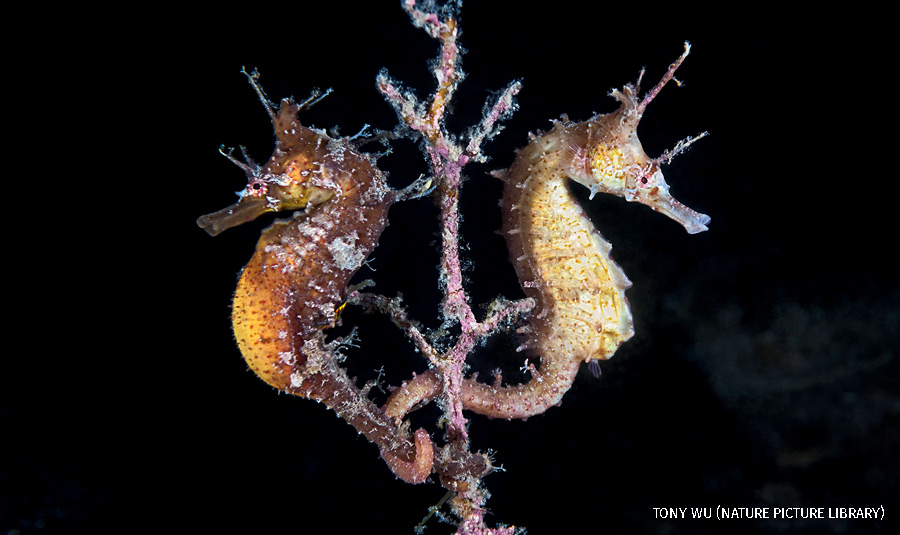 A male seahorse (above) and his pale mate entwine their tails moments after she transferred her eggs to him (below). 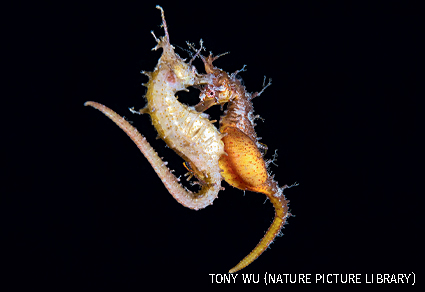 WITH A LIFELONG LOVE OF THE OCEAN, Japan-based photographer Tony Wu devotes his time to documenting marine creatures—and behaviors that are rarely seen. That passion led him to Japan’s Minamata Bay near Kyushu Island, where he spent five consecutive nights photographing Korean seahorses (Hippocampus haema), a species first described in 2017.

Wu’s guide, Morishita-san, who has studied the animals for years, helped Wu pinpoint a time last June, during the fish’s breeding season, to document courtship, mating and birth. Rare in the animal kingdom, male seahorses carry and bear the females’ eggs and even seem to form a bond. “It’s the first time I’ve sensed ‘emotion’ between fish,” says Wu.

The male’s distended belly and pronounced “cleavage” (above left) indicate that he has just received eggs. This pair maintained eye contact after mating, an apparent “affection” that Wu found “incredibly endearing.”

Diving between midnight and 8 a.m., when Korean seahorses are most active, Wu marveled at their complex mating rituals. During the mating season, which runs from late winter through midsummer, fish pairs engage in courtship through greetings akin to a “dance,” often entwining their tails. Once bonded, a female deposits her eggs in the male’s brood pouch, where he fertilizes the eggs. After three to 10 weeks, birth begins with muscular contractions that eject the young, sometimes in tiny seahorse form (top) or in fetal position, still encased in egg membrane (middle). Brood size ranges from dozens to hundreds, and once born, the fish fend for themselves.

A seahorse pair may mate repeatedly through the season, bearing multiple broods. The male-female bond appears generally stable, though the fish sometimes take other mates. Wu documented two females (bottom right) “employing charm and subterfuge” to tempt a nearby male to accept their eggs. He also saw males compete for females with less subtlety, tending to “body slam and headbutt their way to an egg transfer.”

These tiny fish forage, hide and mate in dense seaweed, but the plants can be harmed by fishing and other human activities. So Morishita-san is lobbying to protect Minamata Bay. “This is important because the area the seahorses use for reproduction is just a few steps away from an area of human activity,” says Wu. He’s hoping his intimate photographs of these remarkable creatures will help inspire their protection.

A Plague of Ocean Plastics »
Camouflage: In Plain Sight »
Blog: Under the Sea - Marine Wildlife on the Big Screen »