From New England and New Mexico to Florida and even Bermuda, photographers, birdwatchers and scientists are thrilled by these rare winter visitors from northern boreal forests. 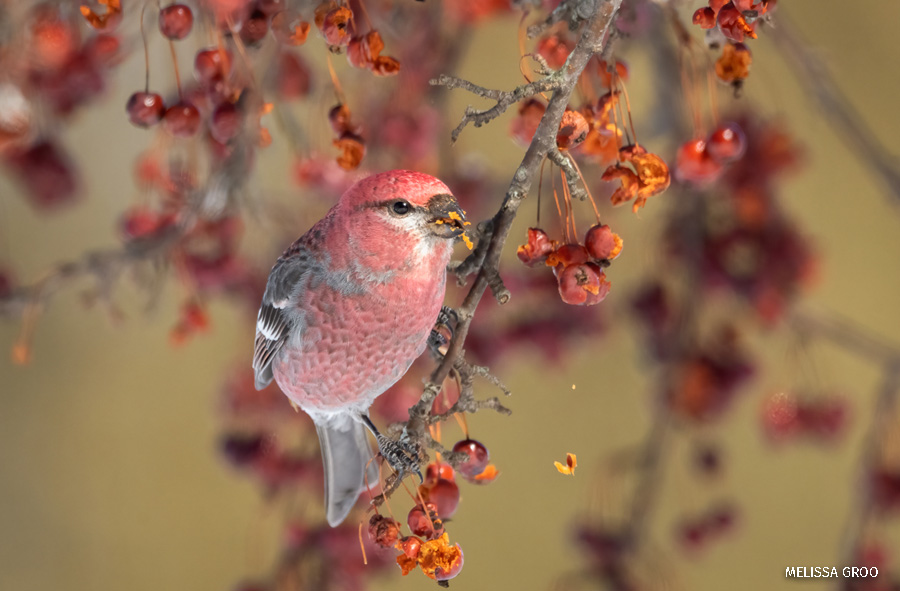 Pine grosbeaks use their feet and bills to climb and grab food, and when these tame finches move south, they can often be seen in town parking lots feeding on crabapples. The birds come in a variety of plumages. Near the U.S.-Canadian border, one encounters mainly immatures and females. Because male pine grosbeaks (above) tend to stay closest to the breeding grounds, they are highly sought after by birders in irruption years.

THIS WINTER, A TRIP TO BROOKLYN'S Green-Wood Cemetery might have had birdwatchers thinking they were in Northern Canada. Cardinals, chickadees and other regular avian denizens now were competing with noisy, pushy flocks of birds rarely encountered in the borough: small, chirping finches sporting vivid streaks and patches of black, yellow, rose and red. Binoculars and cameras at the ready, birders crowded around feeders and beneath seed-bearing trees hoping to spot species they may never have seen in their lives.

Scenes such as this were common across much of eastern North America this winter, thanks to an ongoing continentwide phenomenon known to scientists as a finch “superflight.” Unlike the familiar pattern of bird movement called migration—tied to regular, seasonal changes in day length and an accompanying, predictable change in food availability—a superflight is much more spontaneous. It occurs only when supplies run low of the fruits and tree seeds eight boreal forest finch species feed on—spurring the birds to flock south of their traditional range in search of food. (Some years, just a few species head south in a so-called “irruption;” it is only when all eight move that you get a superflight.) This winter’s spectacular superflight has been captivating birdwatchers with boreal finches in regions as far flung as New Mexico, Florida, and even Bermuda, and mobilized one birder community to begin tracking finch movements to learn more and ensure that future generations also will be able to experience the sight.

The rare hoary redpoll (above) breeds in the high Arctic, and spotting these birds in the United States requires birders to pick through large flocks of common redpolls for the one “frosty white” one. The most difficult of the winter finches to locate, the hoary redpoll’s appearance this winter created so much excitement that birders called it “redpoll fever.” Ornithologist Matt Young (below), founder and president of the new Finch Research Network, holds thistle to attract nearby redpolls.

“There has always been a huge amount of interest in these winter finches from birders across the continent,” says ornithologist Matt Young, founder of the new Finch Research Network (FiRN), a national nonprofit dedicated to studying and conserving the birds and their habitats. Today, as climate change threatens to disrupt the far northern habitats where boreal finches breed, he adds, “it is more crucial than ever to study and conserve the birds.”

Seeds—or rather, seed shortages—are what spark superflights. Inhabitants of ecosystems where temperatures can plunge to minus 60 degrees, all of these finch species must feed frequently. They depend on the seeds of birch, alder, ashes, conifers and other trees along with berries. Yet seed production by many of these trees is highly unreliable. 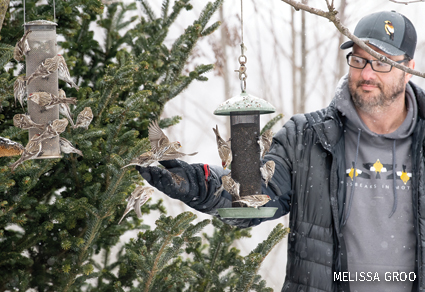 Scientists say the alignment of several food-related factors likely caused this winter’s superflight. During 2019 and into early 2020, the finches benefitted from a glut of food thanks to large seed crops supplemented by an ongoing outbreak of a tree-eating pest called the spruce budworm, an insect that several of the finch species also feed on. This bounty of food in turn led to high rates of breeding success, in essence a finch baby boom. This winter, a bust in tree fruit and seed abundance forced millions of the birds to seek meals elsewhere.

The superflight of 2020-2021 has brought chittering flocks of streaky pine siskins to Bermuda while raspberry-dipped purple finches and handsome evening grosbeaks traveled as far south as Florida, according to records collected by Cornell University’s eBird citizen science database. In towns across New England and the Upper Midwest, red and white-winged crossbills took up residence in conifer trees while tubby pine grosbeaks feasted on whatever berries they could find—sometimes in such unexpected locations as schoolyards and Dunkin Donuts parking lots. New reports still show common redpolls and their pale cousins, hoary redpolls, showing up in huge numbers and in new locations south of their typical wintering range; some birders are calling it “redpoll fever.”

Winter finch irruptions have long been a major event in the birdwatching community, thanks in part to veteran naturalist Ron Pittaway, who in 1999 founded the Winter Finch Forecast, which predicts the birds’ annual flights and has popularized finches beyond the world of ornithology. Building on that effort this winter, birders and ornithologists across the country are collaborating through FiRN to document, study and protect the charismatic songbirds from threats such as climate change and habitat destruction. The network also works to help new birders learn to identify finches, acts as a news source for finch-related science and encourages naturalists to document encounters with the birds. It is also the new host for the Winter Finch Forecast, managed by Tyler Hoar since Pittaway’s retirement in 2020. And FiRN is fundraising to support students and launch studies on focus species, including the red crossbill, evening grosbeak and a trio of mountaintop species called the rosy-finches.

As winter begins to wane and the weather warms, the southward spread of the finches will soon come to an end. But keep your eyes and ears open a little longer, advises Young, and you might still be lucky enough to see some of the birds as they head back north to their boreal homes.

Ryan Mandelbaum is a science writer and birder based in Brooklyn. Melissa Groo teaches photography and co-wrote the National Audubon Society’s Guide to Ethical Bird Photography.

More from National Wildlife magazine and the Finch Research Network: