Native species provide a wealth of the fats and nutrients birds need. 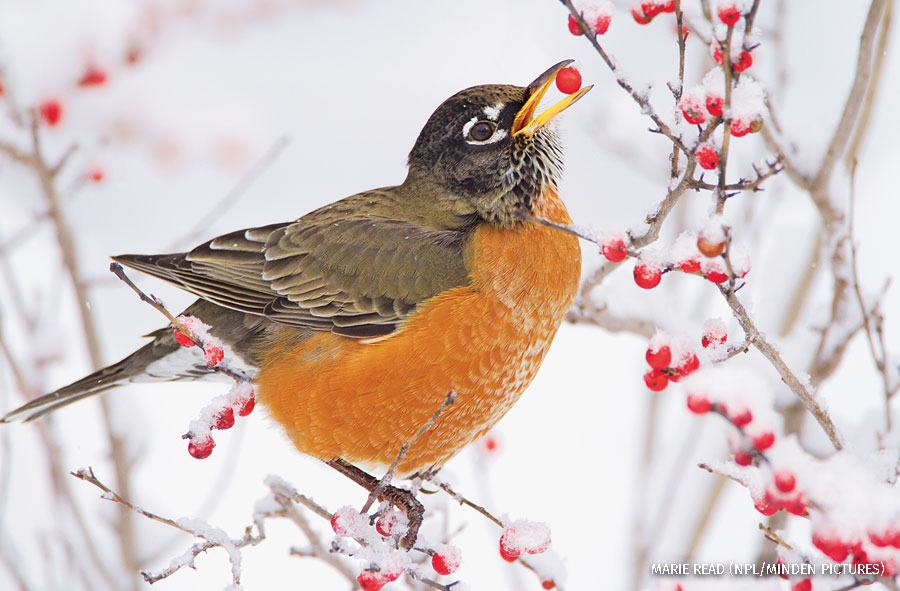 An American robin feasts on winterberry fruits in New York. This native holly holds onto its berries well into the cold months.

THROUGHOUT MUCH OF THE UNITED STATES, flocks of yellow-rumped warblers are conspicuous birds during the winter months. At a time when other warbler species have decamped to the tropics, yellow-rumps—nicknamed “butterbutts” by birders—can thrive in harsh weather as far north as New England and Seattle, thanks in large part to the native bayberries they gobble up with gusto. These fruits boast a body-warming fat content of nearly 50 percent.

Like other indigenous plants, native bayberries are better for birds than exotics. It’s not that birds never eat berries on bushes originally from Asia or Europe. They do. However, a study on bird-fruit interactions published recently in Biological Conservation shows that, even when exotic fruits are more abundant, “birds usually prefer and seek out native fruits,” says lead author Amanda Gallinat, a postdoctoral researcher at Utah State University. In most cases, she adds, native berries contain more of the fats, carbohydrates and nutrients that birds need to survive the cold months. “Invasive fruits are usually nutrient poor,” Gallinat says.

Several native bayberry species will thrive in backyards, including the northern bayberry, southern bayberry (also known as wax myrtle) and, along the Pacific Coast, California wax myrtle. Susan Barton, a University of Delaware professor and extension specialist, says there must be at least one male bayberry in the vicinity for the female plants to bear fruit. Another shrub she recommends is winterberry. This native holly usually holds its red fruit well into the cold months. Wildlife gardeners also can choose from more than a dozen berry-bearing sumac species native to North America.

In addition to berries during winter, fall fruits also are vital to birds, especially neotropical migrants that must travel hundreds, even thousands, of miles during the season. “Migration is such a big undertaking,” says Gallinat. “The birds have to get it right. If they are eating invasive berries, they may not be putting on the fat” that is needed to power their journeys.

For fall berries, viburnums are an excellent choice, especially arrowwood viburnum. Not only are its fruits high in fats and carbohydrates, which allow migrants to rapidly refuel, but the berries also contain large amounts of antioxidants. These chemicals help alleviate the physical stress birds suffer when they burn fat during their long, strenuous flights.

“With natural areas becoming more and more fragmented, it is especially important for people to plant natives on their property,” Gallinat says. “What you put in your yard does matter.”

Doreen Cubie is a frequent contributor.