In frontline communities across the nation, residents and activists are calling out sources of unhealthy air pollution—and demanding environmental action. 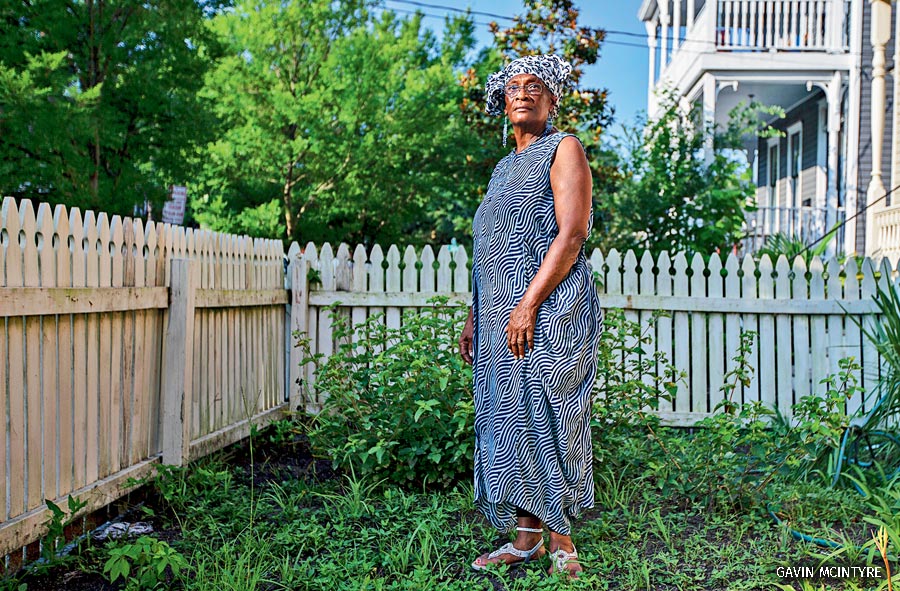 In Savannah, Georgia, activist Mildred McClain (above) stands outside the Harambee House/Citizens for Environmental Justice, a nonprofit she co-founded in 1990 to fight for public health. (Photo by Gavin McIntyre)

AT AN ELEMENTARY SCHOOL IN WEST OAKLAND, California, the school nurse had two baskets filled with inhalers, each bearing a child’s name. That’s how, in 1996, area resident Margaret Gordon learned that many children in her community suffered from asthma—as did she. Gordon began attending public meetings and discovered that emissions from ships and trucks serving the massive Port of Oakland were contributing to the poor health of residents. This revelation prompted “Ms. Margaret” to co-found the West Oakland Environmental Indicators Project and begin decades of advocacy fighting for cleaner air in her community—where 16.2 percent of children have asthma, more than twice the national average.

Across the country, at the same time, Mildred McClain—co-founder and executive director of the Harambee House/Citizens for Environmental Justice—was advocating for cleaner air in Savannah, Georgia. McClain recounts what many in her neighborhood called “the smell of money”—a terrible stench along the industrial corridor where the International Paper Co., Port of Savannah, Arizona Chemical and Union Carbide had businesses. “That smell was of very profitable business,” says McClain. “It was also a smell of abuse, and of people having to barricade themselves in their homes because the smell was just overwhelming.” McClain’s advocacy began at the request of area residents, many of whom had tried but often failed to get city officials to act.

These neighborhoods in West Oakland and Savannah are predominantly low-income communities and, like countless such areas across the United States, they bear a disproportionate burden of unhealthy air pollution—a crisis that impacts the environment and the people who share it.

FACING THE THREAT | In Savannah, Georgia, residents of predominantly Black and low-income neighborhoods live next to a local chemical company (above) and concrete factory (below). Emissions from these and other sources, including the Port of Savannah, create pungent air that activist Mildred McClain calls “the smell of abuse.”

When air is an enemy

Some harmful pollutants in the air come from natural sources such as wildfires and volcanic ash. Far more pervasive are the anthropogenic, or human-caused, sources such as emissions from energy production, manufacturing, transportation, recreation and agriculture—including large-scale livestock production. 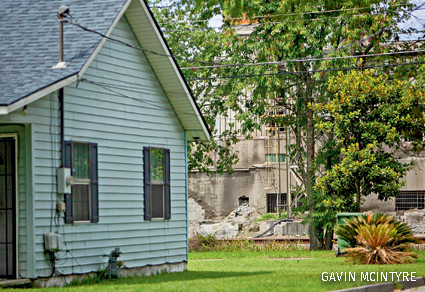 The impacts of air pollution can be felt by both healthy people and persons with existing health concerns but are more severe with children, older adults, persons with chronic conditions and people living in poverty. “Air pollution is ubiquitous,” says climate-health expert Amir Sapkota of the University of Maryland. “It affects so many organ systems, causing respiratory illness, cardiovascular impacts, diabetes, cancer and increased risk of death.” Indeed, according to a 2021 study in the journal Science Advances, PM2.5 causes 85,000 to 200,000 excess deaths in the United States each year, and the sources of this dangerous pollution “disproportionately and systemically affect people of color.”

The data consistently bear this out. A 2019 study in the Proceedings of the National Academy of Sciences (PNAS) found that white people breathe 17 percent less air pollution than they cause; meanwhile, Black and Hispanic individuals suffer 56 percent and 63 percent, respectively, more exposure to pollution than they cause. “Whites are more affluent, they’re buying more products, they’re engaged in the economy, and that’s creating more pollution per capita,” says Robert Bullard, distinguished professor of urban planning and environmental policy at Texas Southern University—and widely considered the father of environmental justice. The health and exposure disparities exist, says Bullard, because “the most polluted neighborhoods are where people of color live.”

In San Diego, for example, 53,000 residents of low-income and largely Latino neighborhoods experience higher levels of air pollution than more-affluent areas due to their close proximity to local port, freight, rail and industry. Port Commissioner Sandy Naranjo grew up in San Ysidro, a border town in the southern part of San Diego. As a child she almost died from a severe attack of asthma, which impacts many area children. Low-income communities like San Ysidro suffered from poor land use planning that rendered them more exposed to toxic air pollution. This realization fuels Naranjo’s work with the Environmental Health Coalition and Mothers Out Front, groups advocating for improved land use policies, modernized air pollution measurement and cumulative impact assessments to help create healthy, thriving communities.

Likewise, the low-income South Ward of Newark, New Jersey, is close to Newark International Airport, the Port Newark–Elizabeth Marine Terminal and several other industries. According to resident Kim Gaddy, the national environmental justice director for Clean Water Action, “25,000 trucks come in and out of Port Newark–Elizabeth on a daily basis, and 3,500 of those trucks remain on local roads.” Having three children with asthma, Gaddy has witnessed the declining health of residents in her community. “The only connection is that they live in the same zip code,” she says. 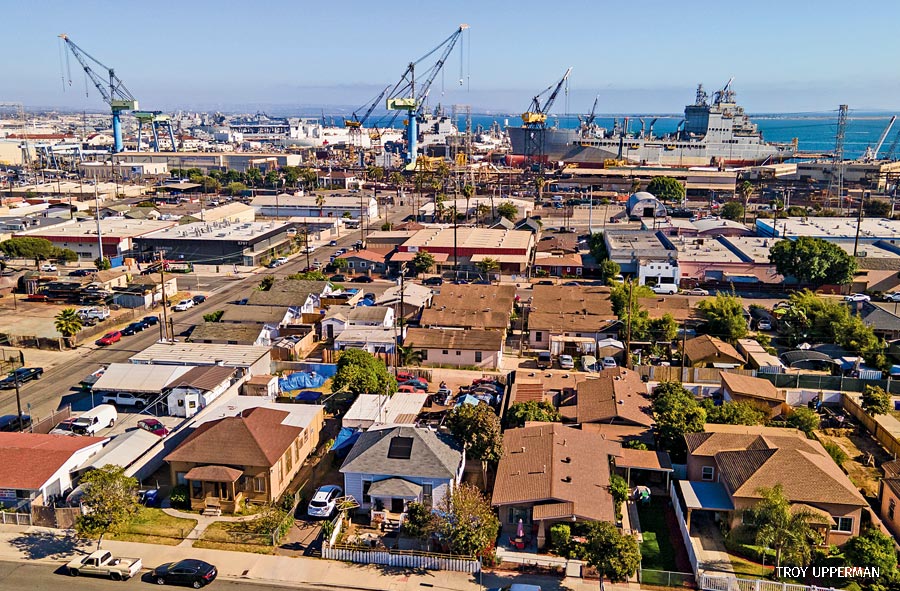 TOO CLOSE FOR COMFORT | Barrio Logan, a low-income, largely Latino community, reaches to the fence line of Naval Base San Diego. The city’s sprawling system of ports, freight, rail and industry subject some 53,000 people to air that does not meet U.S. Environmental Protection Agency standards for healthy air. (Photo by Troy Upperman)

Despite the laudable efforts of activists such as Gordon, McClain, Naranjo and others, community requests to address the health disparities of environmental racism have largely been dismissed by lawmakers and even by mainstream environmental nonprofits. Community organizers have been stigmatized as “rabble-rousing, passionate folks who have nothing else to do,” says McClain.

Many under-resourced communities also struggle to document evidence of their experience with air pollution and its impacts. “Before you can address air pollution,” says Sapkota, “you have to understand its major sources in your community and what is contributing to poor air quality impacts.” Yet communities need resources to engage in this data collection work. “Neither the philanthropic sector nor federal and state governments provide adequate resources for these initiatives,” says Fiona Korwin-Pawlowski, senior director at the nonprofit Clara Lionel Foundation. Founded by renowned singer Rihanna, the group works on climate justice.

Another barrier is fear of retribution—particularly job loss—for those who speak out against polluting employers.  Sadly, many of these industries employ people who commute to work from long distances rather than hiring from low-income communities nearby, leaving those in close proximity to polluters to suffer the ill effects with no economic benefit. 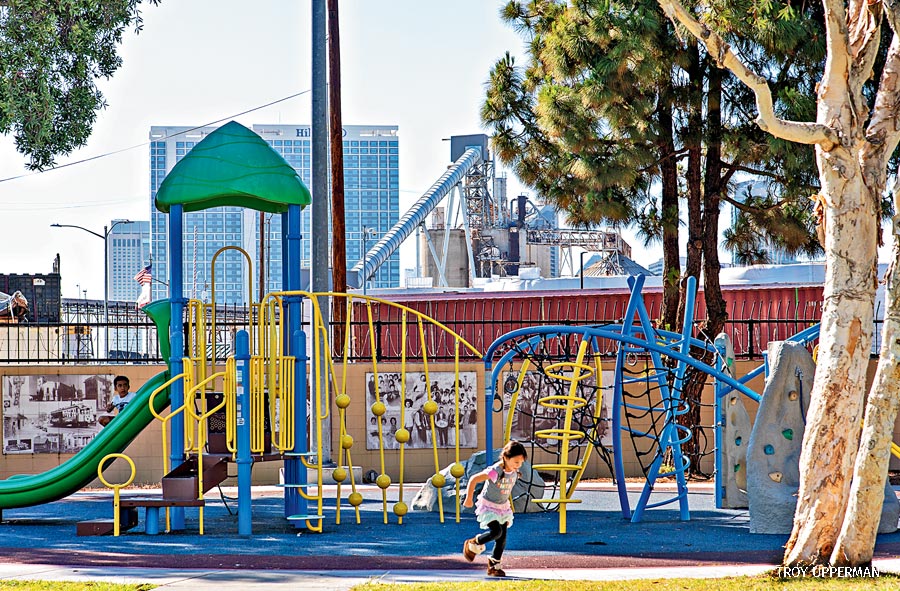 Near a mineral factory, a little girl plays in Barrio Logan.

Air pollution in communities of color clearly played a role in the disparities seen from the COVID-19 pandemic. Research using data from the Centers for Disease Control and Prevention (CDC) shows that people of color suffered 9 percent higher rates of COVID-19 deaths than white people, in part because preexisting conditions such as asthma and heart disease—often related to air pollution—made them more vulnerable to the worst effects of the coronavirus.

Likewise, the adverse impacts of the climate crisis—particularly the increasing number of natural disasters—are disproportionately harming these same communities. “Every year, millions of people globally are affected by climate change-related natural disasters, which also force people and communities into poverty,” says Korwin-Pawlowski. “Marginalized communities are the most at risk, and the intersectionality between social, racial and climate justice is undeniable.”

Just as air pollution and a warming climate are harming human health, they are also negatively impacting our public lands and biodiversity—so efforts to mitigate these problems will help not only people but the wildlife that share the planet. A 2020 study published in PNAS, for example, found that, over the past four decades, regulations designed to reduce ground-level ozone levels to protect human health have prevented the loss of perhaps as many as 1.5 billion birds. “There is a set of intersectional opportunities for us to protect people’s lives and then protect natural spaces,” says Mustafa Santiago Ali, the National Wildlife Federation’s vice president of environmental justice, climate, and community revitalization.

Hope for such progress lies with environmental champions across the country who exemplify the power of one. 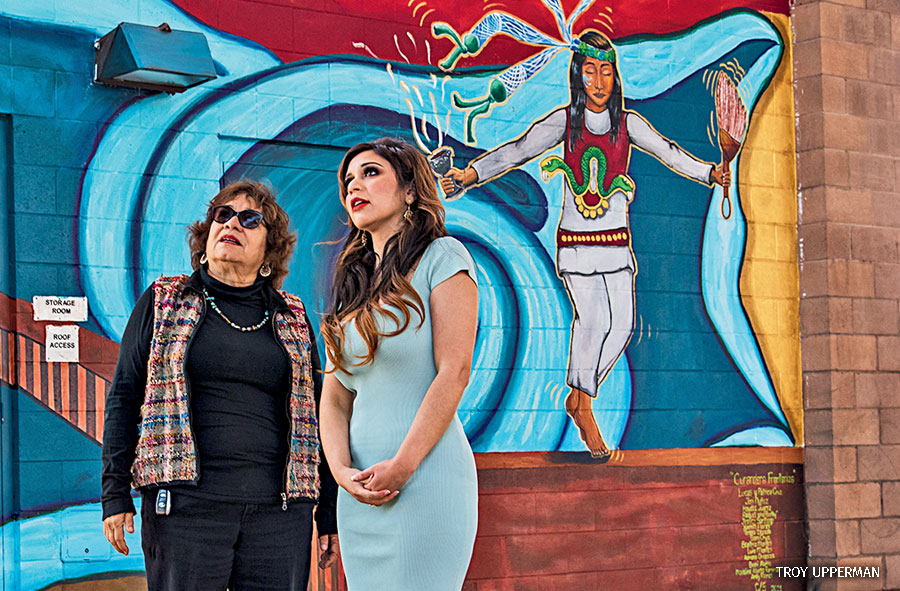 The power of change makers

In 1988, noted activist Peggy Shepard co-founded WE ACT for Environmental Justice to address environmental racism in West Harlem. Alarmed by the paucity of air-monitoring data in Manhattan’s low-income neighborhoods, her group partnered with Columbia University, filed suit with the Natural Resources Defense Council and won a settlement that required placement of 24-hour air-quality monitors that provided scientific data about the air pollution plaguing residents. Today, WE ACT has offices in New York City and Washington, D.C., and Shepard is a national leader in environmental health and justice policy and advocacy.

For decades, Josephine Talamantez has been fighting for the people of San Diego’s Barrio Logan and other Latino neighborhoods dissected against their will by freeways and bridges. Because of the resulting air pollution from traffic, industries and the port, she says, “our area has the highest number of ER visits for breathing-related issues in the state.” To help her community, Talamantez co-founded Chicano Park—the only green space in Barrio Logan and site of treasured cultural murals—and worked with Naranjo to have diesel trucks rerouted away from neighborhood streets.

Savannah’s Mildred McClain has gained global recognition for her work fighting environmental racism. Her partnerships with the U.S. Environmental Protection Agency, CDC and many other groups have highlighted the need for cleaner air in hard-hit communities. With an eye on the future, she’s excited about an air-quality initiative being built with Sacoby Wilson—a leading environmental researcher—and work with the Black Youth Leadership Development Institute, which has helped to train more than 1,500 young people to become community leaders. “For the first time, we’ll be able to leave in place tools for the community to continue to march forward to sustainable growth and development,” says McClain.

While there are significant actions industry and government need to take, there are also individual steps each person can take. “Using public transportation, driving less, getting an electric vehicle if you are in the market for a new car—these small individual actions can add up,” says Sapkota. Clearly, reducing air pollution can protect human life and wildlife at the same time while also increasing environmental justice. So let’s all take a step—and take a healthier breath.