With a deep passion for the natural world, Black researchers, writers and environmental justice activists are changing the face of conservation 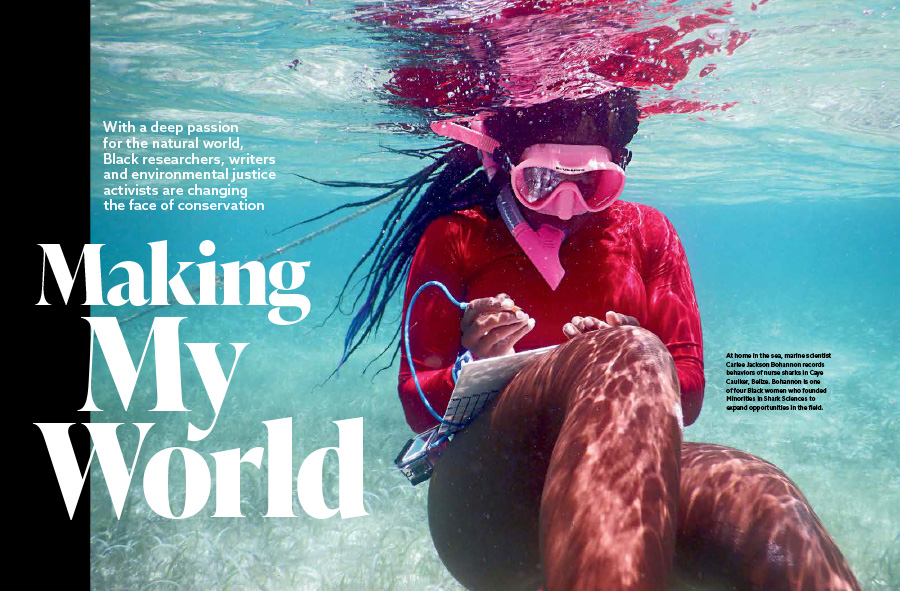 FROM SEAFLOOR TO MOUNTAINTOP, Black conservationists are improving the health of the planet—and its people—in profound ways.

Yet this path to positive change has not been easy. “African Americans have a complicated relationship to the environment,” writes Carolyn Finney in her book “Black Faces, White Spaces,” which explores how being out in nature often has not been safe for Black people. Even so, many Black Americans grew up with a love of nature instilled by their families and time spent fishing, hunting, camping or planting home gardens. With an abiding love of the land and the natural world, growing numbers of Black people are working to kindle that love in new generations.

In recent years, there has been an explosion in nature-based groups promoting events such as Taking Nature Black and using social media hashtags such as #BlackBirdersWeek, #BlackBotanistWeek and #BlackGirlsHike to network and celebrate members’ achievements. Those achievements are groundbreaking, as the following four individuals illustrate. 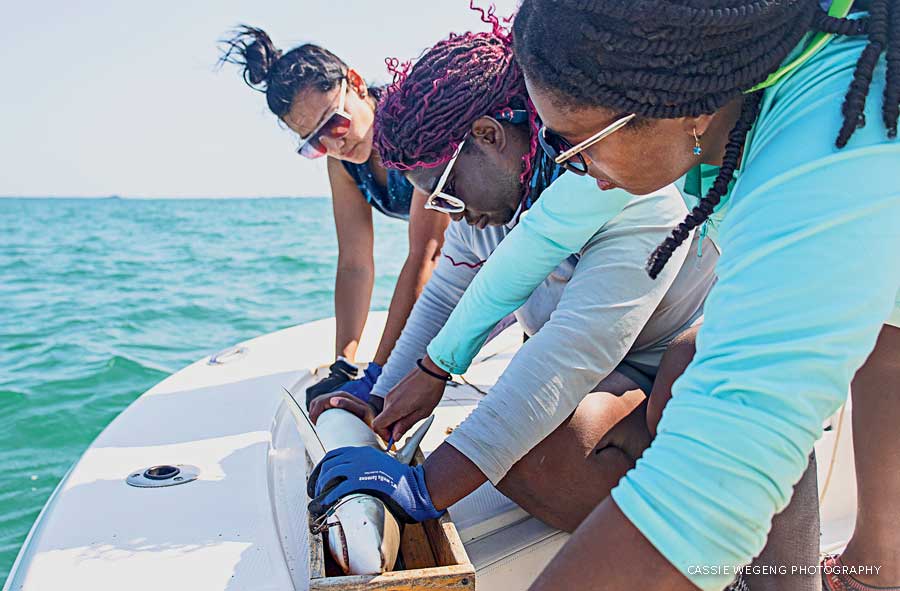 Devoted to expanding the field of shark research, Jasmin Graham (above center and below right) teaches members of Minorities in Shark Sciences to study sharks in Florida waters.

Growing up fishing with her dad off the Atlantic coast of South Carolina, Jasmin Graham developed a deep connection to nature. “Fishing made me fall in love with the ocean and with bodies of water,” she says. “Some people go to church. I go to a body of water to refill.”

That reverence for nature led her to a Masters in biological science and a passion for studying sharks, where she was almost always the only Black person in the room or boat or lab. A random Twitter post in 2020 changed that. Graham met three other Black women with the same zeal for sharks. They quickly bonded and launched Minorities in Shark Sciences (MISS) to “build community among people of color, especially gender minorities of color, to share our experiences, collaborate and feel more connected,” says Graham. 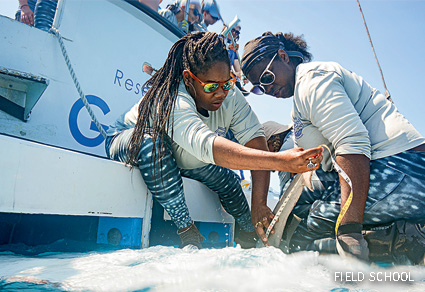 Almost immediately there was tremendous interest and support. MISS raised more than $30,000 in the first few weeks, became a nonprofit and opened to membership. More than 500 people joined from around the world. “It showed us we were not alone,” says Graham. “A lot of people wanted to enter marine science but had felt barred.” MISS offered its first shark-sciences workshop in 2021—free of charge to interested participants—and has been growing since.

“Our ultimate goal,” says Graham, “is to accommodate whatever they need to do. We never ask about grades, test scores, degrees—those don’t define what a person is or correlate to whether they’ll be a good scientist. All they need is for someone to give them a chance.”

Graham herself is a scientist on many fronts, specializing in studying and protecting sharks such as the endangered smalltooth sawfish. A fellow at the prestigious Safina Center and part-time project coordinator with the Mote Marine Laboratory and Aquarium in Florida, she’s also president and CEO of MISS, dedicated to engaging people of color in marine science. “Because of segregation, we could not go to the beach or the swimming pool, so we have lots of issues around swimming,” she says. “We need a multigenerational approach to get parents and kids into the water. Once they are comfortable, then it’s easier to get them to see the magic.” 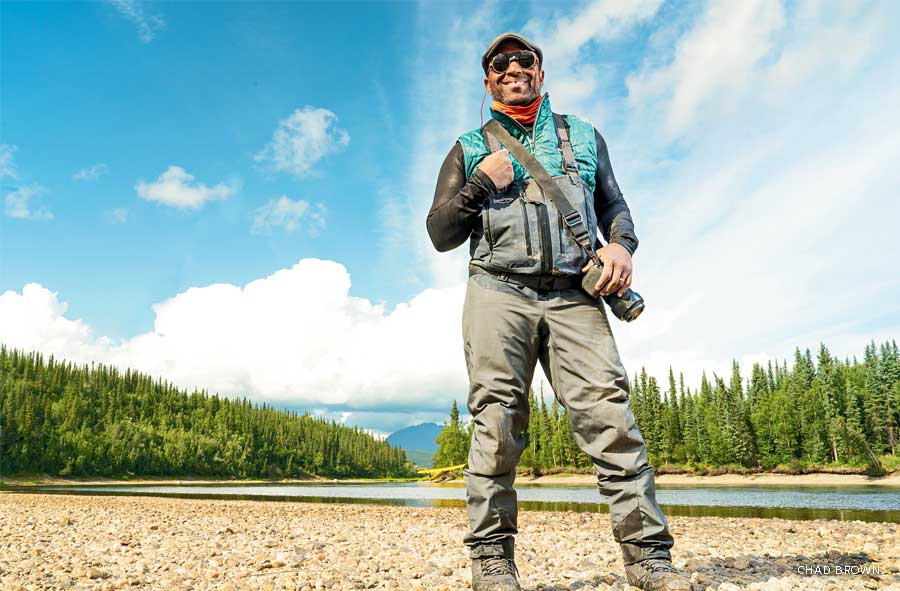 Journalist James Edward Mills visits the Alaskan Arctic to work on a film called “Blackwaters,” due out in 2023.

“Part of my childhood was camping trips, fishing and ski weekends in public outdoor spaces,” says freelance journalist James Edward Mills, who grew up in California. “It was only later that I realized it was unusual for a Black family.”

Founder of The Joy Trip Project, which covers outdoor recreation through a social justice lens, Mills has spent his adult life ensuring that outdoor adventure is celebrated as a part of the Black experience. In 2013, he was a member of the first all-African American team to attempt to summit Denali in Alaska, North America’s highest peak. He then recorded the epic trek in his book “The Adventure Gap: Changing the Face of the Outdoors.”

In 2022, Mills went to Nepal and, from base camp at Mount Everest, documented the first all-Black team to climb Earth’s highest peak. Inspired by Martin Luther King Jr.’s last speech, “I’ve Been to the Mountaintop,” seven members of the team, along with their Nepali sherpa guides, reached the pinnacle. “This was a monumental achievement,” says Mills—and telling such stories, he adds, is vital for the future of conservation.

“People of color are profoundly underrepresented in outdoor recreation as a pastime or career,” says Mills. “Yet they are rapidly becoming a majority in communities all over the planet. If we fail to tell their stories about connecting to nature, we could see a generation of people who decide they have no place or role to play in environmental conservation. These are the people who will ultimately be charged with protecting the natural world, so they need to see narratives that are inclusive.”

Mills finds reason for hope. “I see so many more people of color in the outdoors on a regular basis, and so many more of their stories than I did 30 years ago when my career started. Through this emergence of storytelling, we’re seeing more participation at higher levels. That’s positive change.” 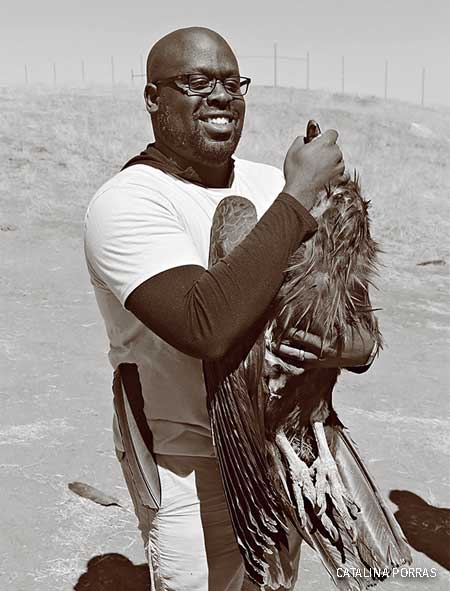 “Watching nature shows on PBS, it was possible to see nature in places that I didn’t know existed,” says Jonathan C. Hall, a writer, ecologist, condor researcher and biology professor at Eastern Michigan University. “Such shows opened my eyes to the bigger world.”

But the world he sees now is in trouble. “My work revolves around human-wildlife interactions,” he says, “and looking at ways to confront the settler-colonial-racist-capitalist roots of modern living”—all of which have had devastating impacts on wildlife and people. One example close to his heart is the California condor and its near extinction due to habitat loss and lead contamination. Hall takes students into the field to capture, study, release and track the birds in hopes of understanding how and why they’re drawn to human habitation.

An avid outdoorsman, Hall also writes about the importance of harvesting wild foods. “When wild food is directly responsible for your own nourishment,” he says, “it awakens your understanding of relationships between humans and ecology.” That relationship—and the health of the environment itself—depends on biodiversity. Yet the “story of colonization,” says Hall, “is the story of homogenizing ecology” through monocropping and other detrimental practices. Likewise, ecology suffered when Indigenous Peoples were exiled from their own lands, unable to practice traditional land stewardship as they had for millennia. “It’s not an accident that when you get a very sharp and violent decrease in the diversity of ways of being in a place,” says Hall, “you start to get all sorts of ecological crises.”

Teaching these lessons to students is gratifying for Hall, yet he remains frustrated by the lack of diversity in conservation. “The outdoors is still overwhelmingly a white space physically and psychologically,” he says. “In nature, Black folks need freedom from the white gaze. It’s another emancipation.” 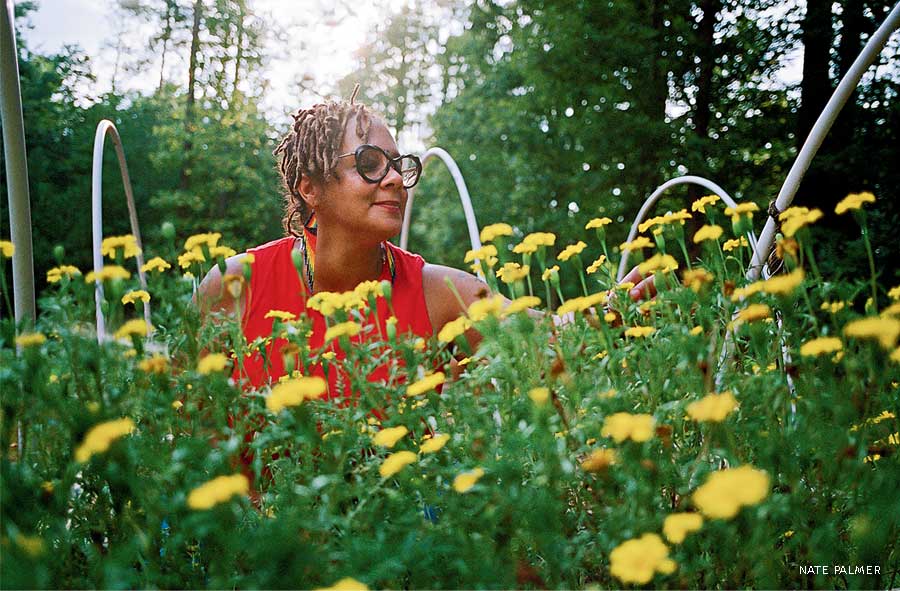 In her Virginia garden, activist and educator Ife Kilimanjaro promotes food sovereignty and environmental justice for all.

“I am trying to think of a time when I was not in nature as a child,” says Ife Kilimanjaro, who loved picking fruits from her grandparents’ garden in Michigan. Today, she shares that love of fresh-grown food as managing co-director of Soul Fire Farm near Albany, New York, which she calls an “Afro-Indigenous community farm committed to uprooting racism and seeding sovereignty in the food system.”

Recognizing that poor and racialized groups are most likely to be food insecure, the farm grows and distributes healthy food, holds workshops for urban youth and trains young Black and Brown farmers in regenerative agriculture. In addition, its Soul Fire in the City program teaches families how to build garden beds and plant and maintain seeds.

Though Soul Fire Farm owns 80 acres, it farms only about eight. “Our intent is to keep the human footprint small and ensure the remaining acreage is dedicated to the life that lives there,” says Kilimanjaro. The farm also collaborates with Stockbridge–Munsee Indigenous Peoples, the original stewards of the area, who teach about wild harvest and share traditional ecological knowledge that reflects their relationship with the land. “That’s another way we think about conservation,” says Kilimanjaro, “as cultural preservation, including Indigenous rights and access.”

“When I think of conservation, there is a dark side,” she says, “like John Muir denying Indigenous People access to their land.” On the joyful side, she cites her “developing relationship with plants and trees, feeling that they are relatives.” Ultimately, her hope is that “Black folks, like all folks, see ourselves in the right relationship with nature.”

Jacqueline L. Scott is a scholar, writer and outdoorswoman based in Toronto, Canada.