From the 2014 National Wildlife® Photo Contest

The 2014 award winners include a Grand Prize recipient who spent several years perfecting a unique photographic technique that resulted in a one-of-a-kind image of grey herons and another winner who grabbed his camera just in time to take a rare picture of praying mantis nymphs hatching on his backyard deck. The images below have been selected by our panel of judges as winners of this year's contest. 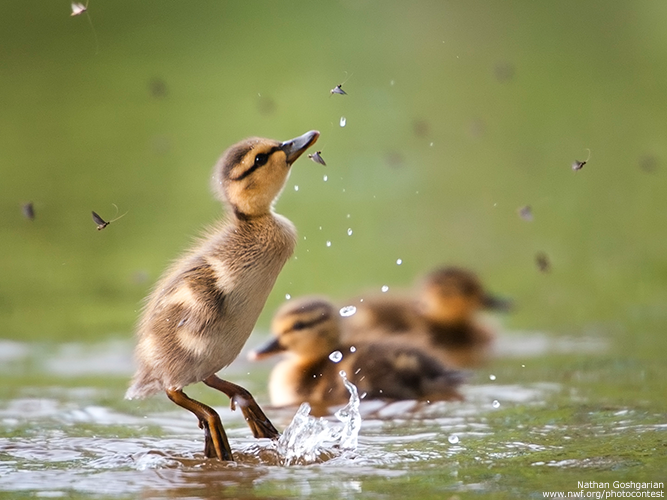 During spring at Horn Pond in the city of Woburn, Goshgarian watched this mallard duckling leaping at flies hovering above the surface. “It had the incredible ability to select a single fly from the seemingly random movements of the swarm and launch itself out of the water,” says the photographer. 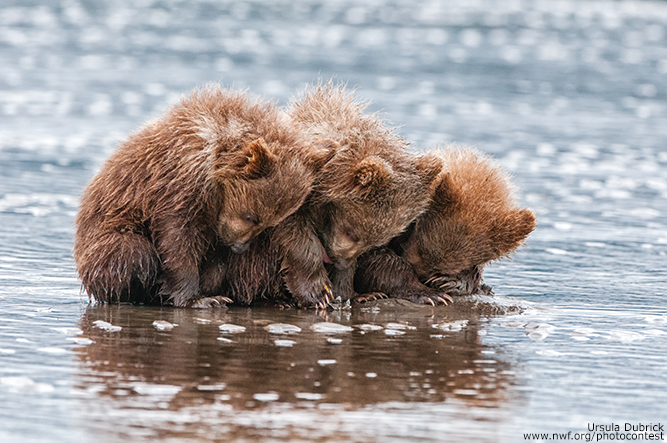 After spending the better part of a summer day learning from their mother how to dig for razor clams in the mudflats in Alaska’s Lake Clark National Park and Preserve, these three young brown bears apparently were worn out. “They huddled together and took a nap while the mother continued to dig nearby,” says Dubrick, who was a safe distance from the animals when she made the photo. 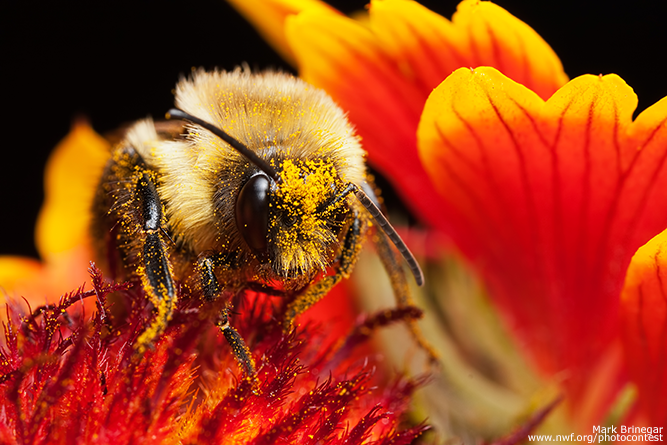 First Place, Backyard Habitat
Brinegar photographed this male bumble bee on a blanket flower in his Indiana backyard. “I have great respect and fondness for bees and other pollinators, and I spend a lot of time in their company with a camera,” he says. “This bee obviously had been hard at work, with a face full of pollen and still plugging along around 8 p.m. on a warm autumn evening. It was kind of a ‘last call for nectar,’ scenario, as this was the only bee I saw at that hour.” About a third of North America’s 50 bumble bee species have been declining from habitat loss, pesticide use, disease and competition with invasive bee species. 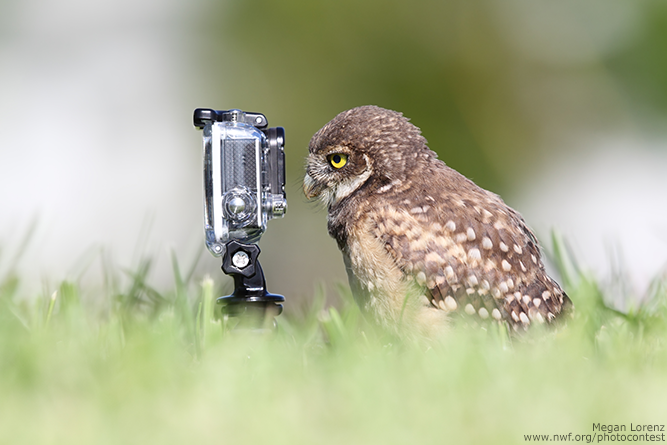 Second Place, Backyard Habitat
I've been in love with owls for as long as I can remember,” Lorenz says. “I started photography in 2007 and, right from the start, they were one of my favorite subjects.” When she learned Florida is home to a large burrowing owl population, she began making annual visits and befriended people who welcomed her onto their property, which was home to several of the birds. Last spring, Lorenz set up a GoPro camera near a burrow to get video of the owls. This bird showed a keen interest in the camera, cuddling up to it or pecking at it. “It seems everyone is obsessed with taking selfies these days,” Lorenz says. 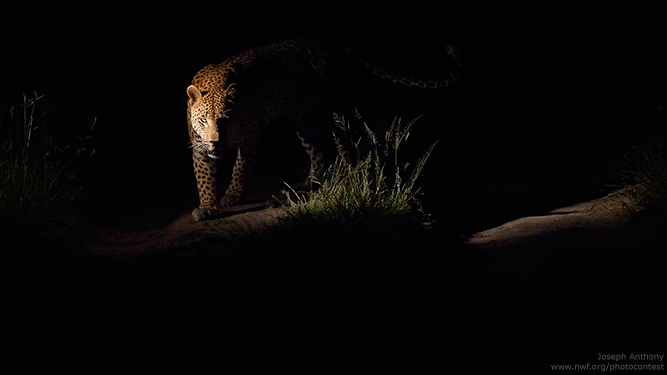 Second Place, Mammals
Executed after months of planning and multiple observations of leopards in the wild, this image of a large male was made in South Africa’s Sabi Sabi reserve. It is the culmination, Anthony says, of his quest to capture “the essence of the leopard.” He took the striking photo while concealed in a vehicle.

First Place, Other Wildlife
During a Mother’s Day celebration on his family’s backyard deck, Brown noticed several praying mantis nymphs crawling out from beneath their picnic table. He quickly ran inside the house to grab his camera and photographed the tiny insects up close as they emerged from their egg case. 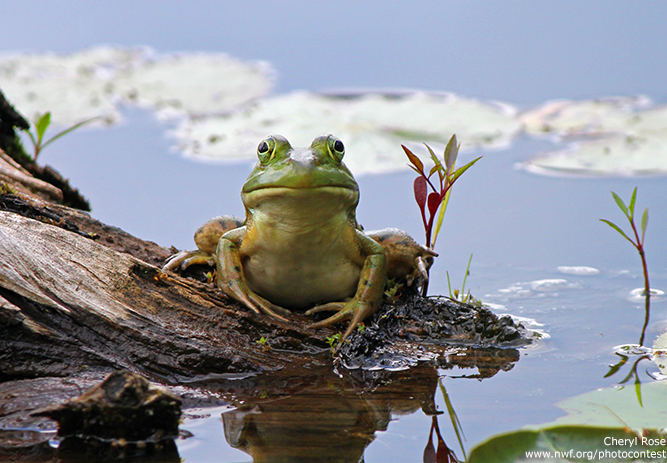 Second Place, Other Wildlife
Rose spotted this bull frog while exploring Waseeka Wildlife Sanctuary in central Massachusetts. “There were so many frogs in this pond,” she recalls, “but this one gave me the perfect pose.” 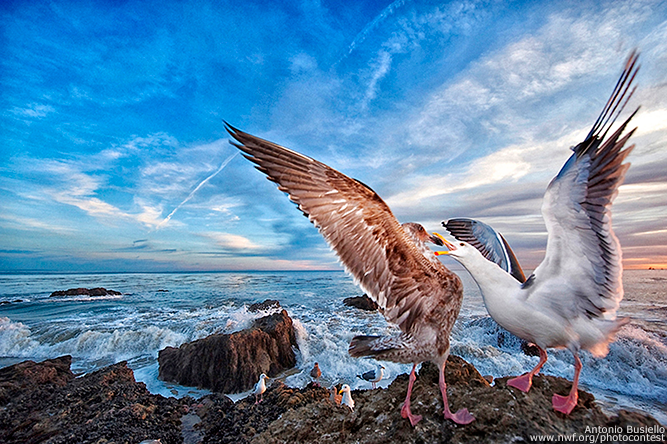 First Place, Birds
While working on a research project in Leo Carrillo State Park in southern California, Busiello noticed how often California gulls gathered on a specific rock while waiting for opportunities to catch fish. He set up his camera, equipped with a wide-angle lens and a long-distance remote control, beside the rock and watched the birds fight for control of the position. “After a few days,” he says. “I got this image.” 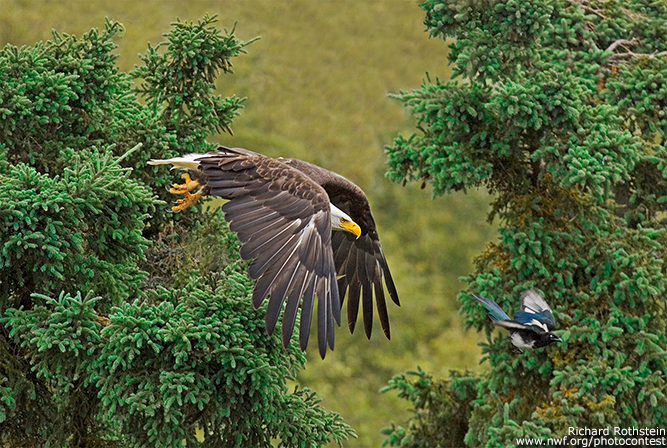 Second Place, Birds
Rothstein spotted this bald eagle and a black-billed magpie perched in adjacent trees in Alaska’s Katmai National Park and Preserve. When the eagle took off it startled the magpie, which hastened into flight as well. Despite the visual evidence, the eagle was not chasing the magpie, and both birds, Rothstein says, went their separate ways without incident. 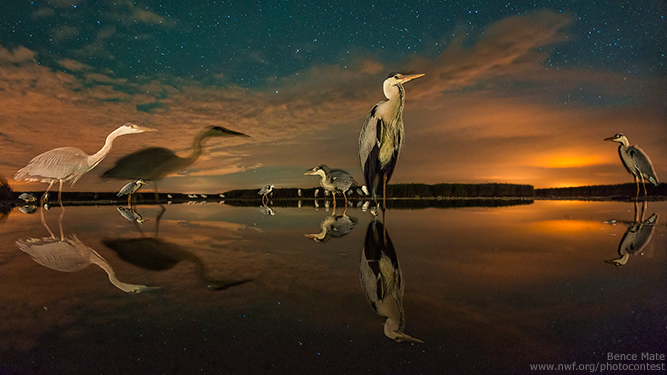 Grand Prize
This image of grey herons in Hungary’s Kiskunság National Park was the result of remarkable perseverance by Mate, who spent 74 nights over a period of several years experimenting with his camera gear inside a blind next to a lake where the birds often pass the night. “I made the photo with a fish-eye lens that was less than a meter away from the closest bird and had to be careful not to scare the herons with noise or light,” he says. Because the birds and the stars were not in the same depth of field, Mate used special, home-made equipment to achieve proper exposure throughout the scene. The birds kept moving during the 32 seconds that the shutter was open, he adds, “and they created interesting forms in front of the starry sky.” 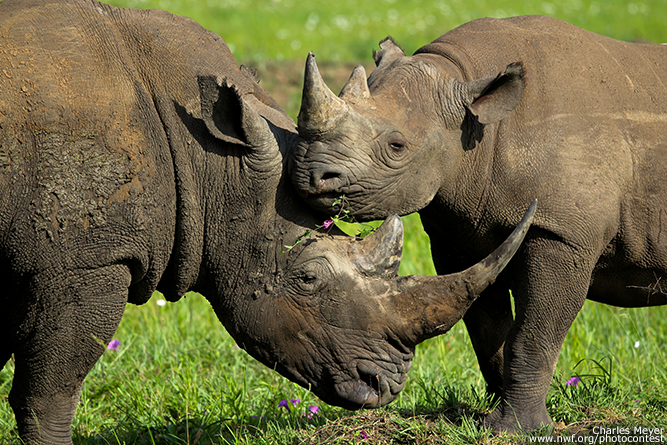 First Place, Youth
Africa is home to two rhinoceros species that almost never mingle, making this image of a smaller, young black rhino nuzzling a white rhino in Phinda Game Reserve, South Africa, very rare. So are both species, which are being decimated by horn poachers. “Our guide said he’d never seen anything like it before,” says Meyer, 17. 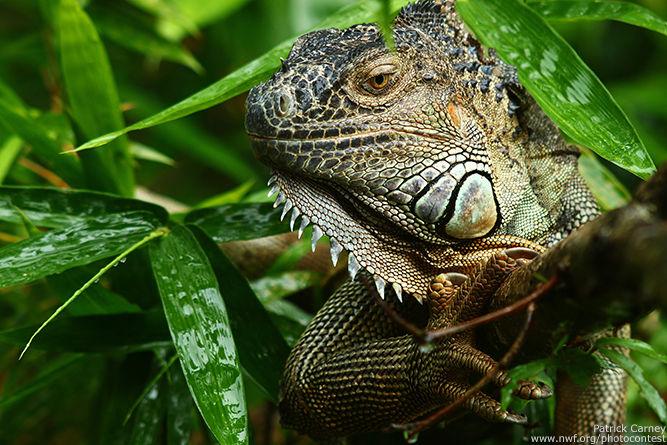 Carney, who started taking photos at 8 years old, was on a high school Spanish field trip to Costa Rica when he captured this image of a 6-foot-long green iguana. “Wildlife can be found everywhere there, so I didn’t go anywhere on the trip without my camera,” he says. “Nature photography will always be a passion of mine.” 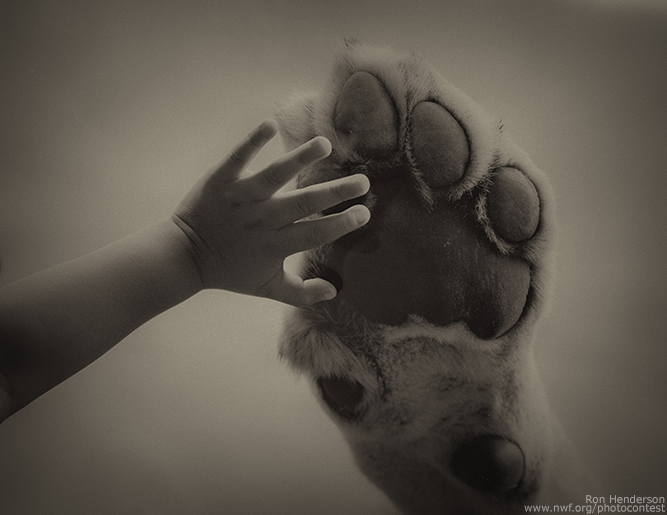 
Henderson’s photograph of two species reaching out for one another was purely fortuitous. “I was with my 12-year-old daughter at the Dallas Zoo, and both of us had brought our cameras. While grabbing a bite in the cafe, we noticed a lion on its back, leaning against the viewing window a few feet away. Moments later, a toddler walked up and placed her hand against the large paw of the lion as if to touch it.” He says it was just luck that the little girl kept her hand on the glass long enough for him to grab his camera, zoom in and get the shot. 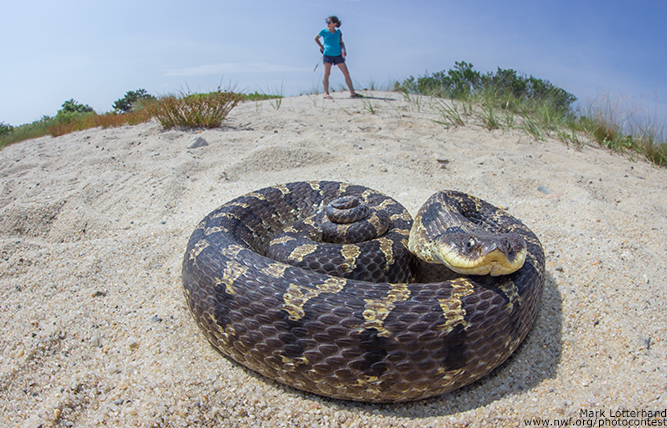 Second Place, Connecting People and Nature
While hiking in Cape Cod National Seashore in Massachusetts, Lotterhand came across this eastern hognose snake. “It’s known for its defensive theatrics such as hooding like a cobra and hissing loudly,” he says. The snake has saliva that is toxic to small prey, but it poses little threat to humans. 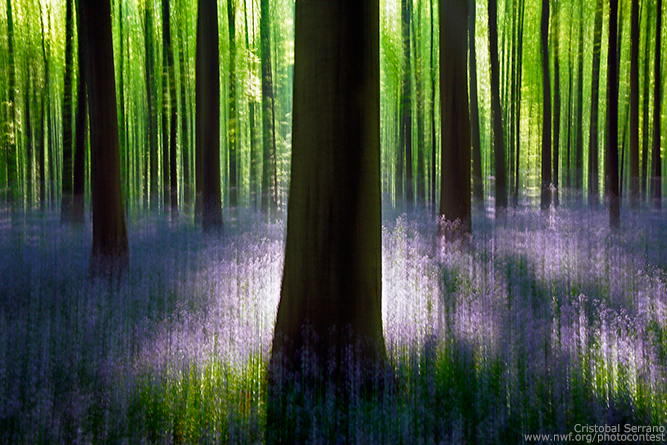 First Place, Landscapes and Plant Life
Spring brings an explosion of blue bell flowers to a forest outside Brussels, Belgium, with millions of the blossoms spreading out like a blue carpet. “At sunrise I chose this thick screen of beech as a background, aligned the sun behind the main tree to create a halo of mystery, and played with light and shadow to show a conceptual representation of the forest’s shapes,” Serrano says. He panned the camera to give the effect of motion to a still landscape. 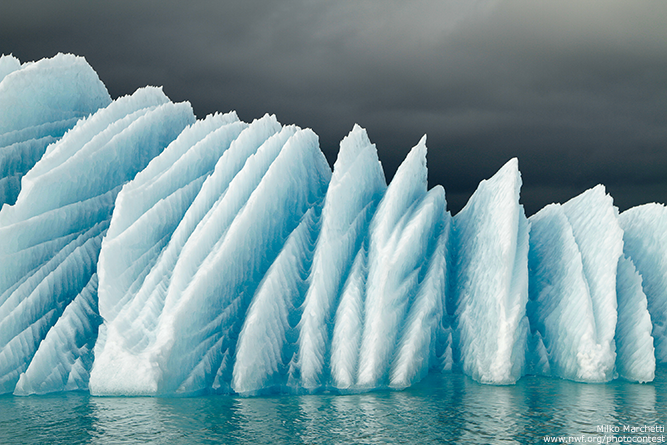 Second Place, Landscapes and Plant Life
During a summer tour of Iceland’s Bay of Jokulsarlon, Marchetti captured this striking image of an iceberg while traveling in a Zodiak