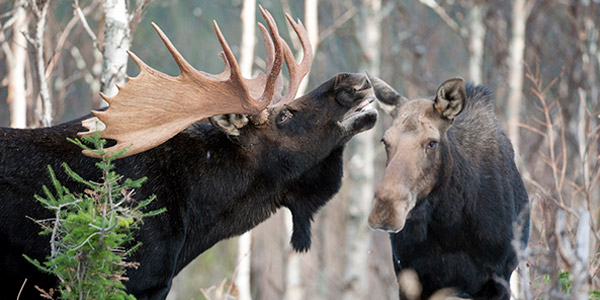 How do moose cross the road in Vermont?

The National Wildlife Federation's Northeast Regional Center spearheads efforts to make safe pathways for wildlife in the pristine Worcester Mountains of Vermont, where some of the most deadly road crossings in America can be found. This Critical Paths Project is a model project that seeks to identify critical wildlife road crossings in the State of Vermont.

To date the Critical Paths Project has identified 11 priority zones out of the 38 wildlife crossings along the spine of Vermont’s Green Mountains. Once the priority zones are identified, we then work with transportation officials to implement practical solutions that help reconnect habitat and protect wildlife.

The project uses a combination of cutting-edge computer modeling and good old fashion on-site field work to determine where bottlenecks and impermeable crossings exist that can impede the free movement of animals.

The National Wildlife Federation worked with a team of state biologists and conservation organizations to identify 11 critical "Priority Crossing Zones" along the spine of the Green Mountains that are essential to south-north wildlife movement.

The researchers assessed the physical features of the crossings and the natural features of adjacent landscapes. They also tracked and monitored wildlife movement patterns at each crossing over an extended period of time.

The Critical Paths Project was made possible with funding from the Wildlife Conservation Society, Vermont Department of Fish and Wildlife, and generous donations from individuals.