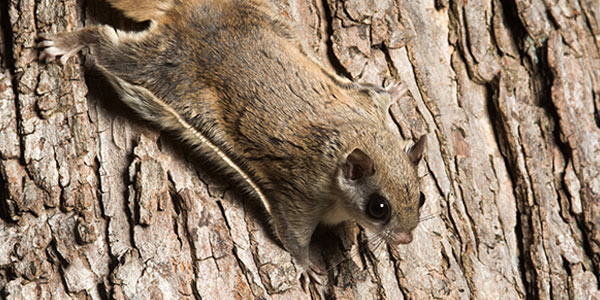 Flying squirrels might more appropriately be called “gliding squirrels” because they aren’t capable of true powered flight that a bird or a bat can do. Flying squirrels glide. They have a special membrane between their front and back legs that allows them to glide through the air between trees. When a flying squirrel wants to travel to another tree without touching the ground, it launches itself from a high branch and spreads out its limbs so the gliding membrane is exposed. It uses slight movements of the legs to steer, and the tail acts as a brake upon reaching its destination. Flying squirrels can cover more than 150 feet in a single glide.

Flying squirrels live in deciduous and coniferous forests and woodlands. They make their homes in snags, woodpecker holes, nest boxes, and abandoned nests of birds and other squirrels. Sometimes multiple squirrels will nest together to keep warm in the winter.

Thanks to their superb gliding abilities, flying squirrels are great escape artists. Once a flying squirrel lands on a tree trunk following a flight, it promptly scurries to the other side of the trunk to avoid any predators that may have followed it. Nevertheless, owls, hawks, tree snakes, and climbing mammals frequently manage to catch and consume these tiny rodents.

Flying squirrels are omnivores. They eat a variety of foods, including seeds, nuts, fungi, fruit, and insects. Southern flying squirrels are considered one of the most carnivorous squirrels because they supplement their diet with eggs, birds, and carrion.

Flying squirrels are common rodents in many parts of the country, but because they are nocturnal, few people ever see them. Two subspecies of northern flying squirrel are federally listed as endangered due to habitat loss.

Humans have long sought to replicate the flying squirrel’s gliding abilities. Base jumpers and skydivers have developed a special suit that mimics the flying squirrel. The suit works to slow their descent and allows them to maneuver through the air.