The Truth about Groundhog Day 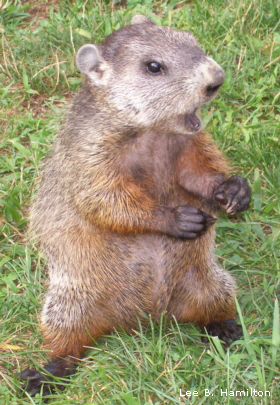 According to the top-hatted members of the local Groundhog Club, Punxsutawney’s Phil (in all his subsequent incarnations—groundhogs live an average of only 5 years) is batting a thousand in the weather-prediction department, though meteorologists tend to dispute this claim. And cynics point out that in chilly Punxsutawney, six more weeks of winter is an early spring.

Now Stam Zervanos, a biology professor at Pennsylvania State University’s Berks-Lehigh Valley College has made a discovery that could, um, cast a shadow on Groundhog Day. Male woodchucks, as the animals are also known, aren’t checking the weather when they wake up in early February, says Zervanos. They’re scoping for potential mates.

Yes, Groundhog Day is more like Valentine’s Day. When a male groundhog wakes up in February from its three-month-long hibernation, he leaves his burrow and goes for a stroll around the ol’ territory—a tract of about 2 to 3 acres. When he comes to a female’s burrow (there may be several within his territory), he ducks inside and stays the night. The next morning he continues on his tour. “Each male visits two or three females,” says Zervanos.

To figure this out, Zervanos located 32 subjects on the university’s experimental farm, a handy half-mile walk from his office. He fitted some of them with radio transmitters so he could track their movements. He also rigged infrared cameras at burrow entrances to record groundhog comings and goings. (Just as cetacean biologists recognize individual humpback whales by the markings on their tails, Zervanos can recognize individual groundhogs by the markings on their muzzles and fur.)

The cameras don’t show what’s going on inside the burrows. “We tried to snake one in there, but the lens got covered with mud,” Zervanos says. But he is pretty sure the sleepover parties are tame. “We know they are not mating because no baby groundhogs are born in early March,” he says. (The groundhog gestation period is about 30 days.) After the February cuddlefest, the male goes back to his own pad, rolls up in a ball and sleeps for another month.

So what’s with the rodent sleepovers? “They’re a chance to bond,” Zervanos suggests. The February visits may serve as “getting to know you” sessions—obviating the need to spend lots of time exchanging biological details in March. As far as Zervanos knows, this speed-dating behavior is unique to groundhogs. “I think it’s a major find,” he says.

When the groundhogs wake up for good in March, the males drop in on the females again for a week of wild groundhog mating. Then, fraternizing ends. The baby woodchucks arrive in early April. If they can avoid foxes, hawks and coyotes, they may grow as large as 10 pounds and dig 20-foot-long burrows of their own.

Zervanos still has questions about groundhogs. He wonders if females are ever visited by more than one male and if their hibernation is being impacted by global warming. He has also applied for a grant to study groundhog biorhythms—does some internal clock keep running as they hibernate? Do they always wake up at the same time of day? “We plan to set up hand-dug burrows and install cameras, so we can see what goes on inside,” he says.

It figures: When you’re a world-famous celebrity rodent, the paparazzi are always after you.

“10 Things You May Not Know About Groundhogs”
Groundhog Bagel Treat—a recipe for a tasty treat
Garden for Wildlife: NWF’s Certified Wildlife Habitat Program