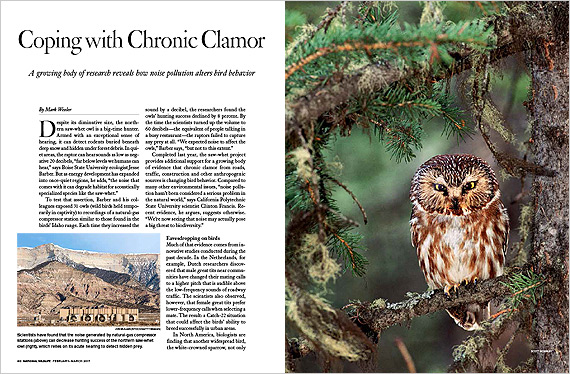 Scientists have found that the noise generated by natural-gas compressor stations (above) can decrease hunting success of the northern saw-whet owl (above, right), which relies on its acute hearing to detect hidden prey


DESPITE ITS DIMINUTIVE SIZE, the northern saw-whet owl is a big-time hunter. Armed with an exceptional sense of hearing, it can detect rodents buried beneath deep snow and hidden under forest debris. In quiet areas, the raptor can hear sounds as low as negative 20 decibels, “far below levels we humans can hear,” says Boise State University ecologist Jesse Barber. But as energy development has expanded into once-quiet regions, he adds, “the noise that comes with it can degrade habitat for acoustically specialized species like the saw-whet.”

To test that assertion, Barber and his colleagues exposed 31 owls (wild birds held temporarily in captivity) to recordings of a natural-gas compressor station similar to those found in the birds’ Idaho range. Each time they increased the sound by a decibel, the researchers found the owls’ hunting success declined by 8 percent. By the time the scientists turned up the volume to 60 decibels—the equivalent of people talking in a busy restaurant—the raptors failed to capture any prey at all. “We expected noise to affect the owls,” Barber says, “but not to this extent.” 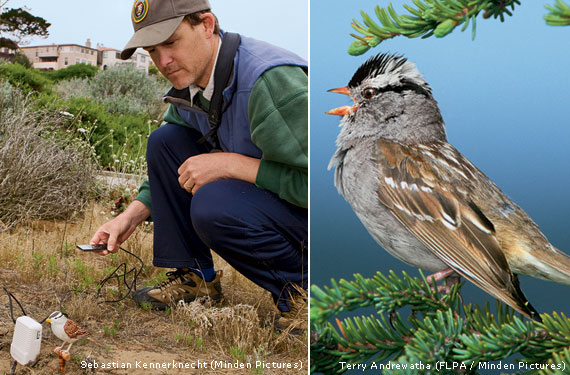 Biologist David Luther (left) employs a decoy bird and recorded calls to study the responses of white-crowned sparrows (right) in San Francisco to different call dialects, which are decreasing in number as noise increases.

Much of that evidence comes from innovative studies conducted during the past decade. In the Netherlands, for example, Dutch researchers discovered that male great tits near communities have changed their mating calls to a higher pitch that is audible above the low-frequency sounds of roadway traffic. The scientists also observed, however, that female great tits prefer lower-frequency calls when selecting a mate. The result: a Catch-22 situation that could affect the birds’ ability to breed successfully in urban areas.

In North America, biologists are finding that another widespread bird, the white-crowned sparrow, not only is singing louder than in the past but also is changing its repertoire of songs. Much the way residents of New England sound different from people in the Deep South, “many songbirds sing in different dialects depending on where they range,” says George Mason University biologist David Luther, who studies the dialects of white crowns that live year-round in the San Francisco Bay Area.

According to recordings made in the late 1960s by ornithologist Luis Baptista, sparrows inhabiting different parts of San Francisco once sang in three distinct dialects and in as many as 10 dialects in adjacent communities. But as noise levels have increased exponentially since then, white crowns have been altering the pitch and length of their calls. Today, Luther and his colleagues report, the birds all sing in a single dialect. “They clearly have shifted their song to one that can be heard above the urban din,” he says.

How much does roadway traffic alone contribute to changes in avian behavior? A few years ago, Barber and a team of Boise State graduate students initiated a study to find out. Along a remote ridge in a southern Idaho forest where food is plentiful, they created a “phantom road” by attaching several sets of large speakers to trees. “We knew that the study area was an important stopover site where migratory songbirds could rest for a few days and bulk up before continuing on their long journeys south,” Barber says.

At regular intervals throughout fall, when more than 100 bird species flock to the ridge to feed during migration, the team blasted recordings of cars driving in a national park, then documented the animals’ reactions. The racket, they found, drove more than a third of the birds away from the ridge, causing them to lose a critical opportunity to refuel. Migrants that didn’t leave also suffered. “They didn’t lose weight,” Barber says, “but they failed to gain the weight needed to maintain their ability to migrate.” He theorizes that because traffic noise drowned out the sounds of potential threats, the birds were too distracted looking for predators to stop and eat.

The project left a lasting impression on many acoustic ecologists who had focused their work on the effects of noise on breeding and communication. “It provided us with strong evidence that noise impacts other aspects of birds’ lives such as migration and feeding,” says Francis. 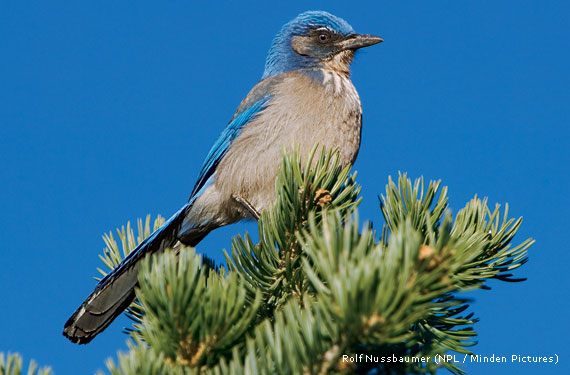 In his own research, Francis recently discovered that human clamor can even have ripple effects on plants, potentially impacting an area long after the source of the noise disappears. He conducted experiments during a three-year period on federal lands in northwestern New Mexico, where hundreds of natural-gas wells run nonstop 24 hours a day. The area traditionally has been dominated by pinyon pines, which provide habitat and food for dozens of wildlife species.

One of those species, the Woodhouse’s scrub-jay, plays a key role perpetuating the pines by collecting hundreds of fallen seeds and burying them to eat during winter. Many seeds the birds fail to find germinate and produce seedlings. At the study site, however, the noisy compressors appeared to interfere with the jays’ ability to communicate. Large numbers of the birds eventually fled to a nearby quiet area.

Without jays to spread seeds, Francis and his associates discovered, pines in the study site are disappearing while they are flourishing in the quiet zone. And because pinyon pines take decades to grow from seedlings to mature trees, “the consequences of noise could have long-term effects on this ecosystem’s diversity and structure,” Francis says

Francis, like thousands of other scientists and birders across the country, relies heavily on avian calls and songs to identify birds and count their numbers in the field. Such counts are crucial to decisions about the status and conservation of species. But background noise may affect the scientists’ observations. “If we see declines in some breeding birds, how much of it is due to low detections because of background noise and how much is due to actual species declines?” asks Theodore Simons, a North Carolina State University ecologist who has been investigating the question.

For three years, Simons participated in the annual North American Breeding Bird Survey (BBS), which since 1966 has been a major source of population and range data for more than 400 species. Working with other scientists, he set up a series of tests using equipment that played the sounds of singing birds against varying levels of background noise. He then asked experienced birders—including experts from the U.S. Geological Survey who help organize the BBS—to identify what they heard.

The tests showed that even small amounts of background noise led to a 40 percent decrease in observers’ ability to detect singing birds. Since then, the study has helped researchers design new data-collection methods and statistical models that account for background noise in estimating populations, including more repeated sampling over a number of days at a specific site. “It allows us to get a truer picture of species numbers and identifications,” Simons says.

Other researchers are pursuing solutions that could lessen the effects of human clamor on bird behavior. In Wyoming’s Grand Teton National Park, Barber and Francis are testing how lowering speed limits by 20 miles per hour can benefit birds. “This is one of the most effective ways to cut noise in protected areas,” Barber says. When people drive slower, he notes, the footprint—or distance sound travels—is drastically reduced. Elsewhere, highway engineers are experimenting with several noise-reduction techniques, such as replacing traditional road surfaces with so-called “quiet pavement” made of rubberized asphalt that decreases the sound of traffic by several decibels.

“With so many species decreasing in numbers,” Francis says, “we can no longer afford to ignore how the acoustic environment is contributing to avian declines.” Identifying and understanding the different ways birds respond to noise is a crucial step toward reducing that contribution.