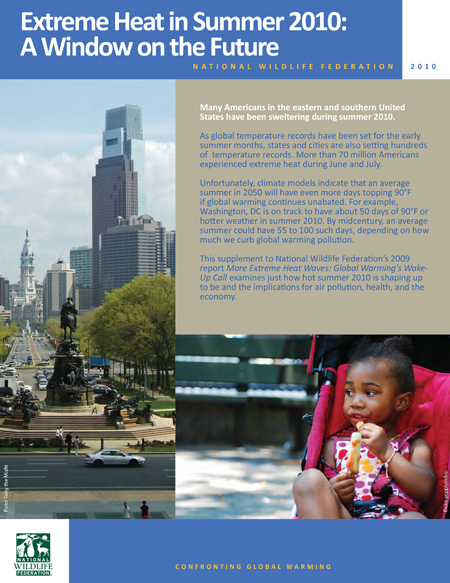 Many Americans in the eastern and southern United States have been sweltering during summer 2010.

Unfortunately, climate models indicate that an average summer in 2050 will have even more days topping 90°F if global warming continues unabated. For example, Washington, DC is on track to have about 50 days of 90°F or hotter weather in summer 2010. By midcentury, an average summer could have 55 to 100 such days, depending on how much we curb global warming pollution.

This supplement to National Wildlife Federation’s 2010 report More Extreme Heat Waves: Global Warming’s Wake-Up Call examines just how hot summer 2010 is shaping up to be and the implications for air pollution, health, and the economy.

According to the National Oceanic and Atmospheric Administration (NOAA ), 2010 brought the hottest June on record. Almost the entire global land surface experienced warmer-than-normal conditions, with especially high temperatures in the eastern and south-central United States. The warm summer continued the heat we already experienced through the first half of 2010, which is the hottest January through June on record.

Extreme Summer 2010 Heat Could Be Typical by Midcentury

Summers like the current one, or even worse, will become the norm by 2050 if global warming pollution continues to increase unabated. Alternatively, taking steps to reduce emissions can help avoid some of this increase in extremely hot days. For example:

Hot and sunny days with relatively stagnant winds provide textbook conditions for building up unhealthy levels of ground-level ozone pollution. The steamy summer of 2010 has brought many such days, despite continued efforts by the U.S. Environmental Protection Agency and individual states to restrict emissions from tailpipes, power plants, and industry.

For example, by the end of June 2010, the Washington, DC, metropolitan area had 18 days when maximum 8-hour average ozone met or exceeded 65 ppb, about 50 percent more than the region typically has by that time based on the previous 5 years of data.

Continued global warming could make it even more difficult to meet the ground-level ozone standards in the future. Warmer conditions and more periods with clear, sunny weather patterns would be conducive to ozone formation. At the same time, some emissions of ozone precursors are expected to increase as the demand for air conditioning and the risk of wildfires increase.

One study found that global warming could increase the groundlevel ozone by 10 ppb or more during heat waves by 2050 in the Midwest and Northeast. For a city like Washington, DC, that means about 42 excess deaths for each day that there is elevated ozone.7 These would be in addition to any deaths caused primarily by exposure to extreme heat.

In January 2010, the Obama Administration announced its intention to lower the ozone standard from 75 parts per billion (ppb) to something in the range of 60 to 70 ppb. EPA estimates that lowering the standard to 65 ppb would to save 1740 to 5100 lives annually, prevent nearly a million missed school days each year, and provide a total benefit to the economy of $15 to $43 billion by 2020. Stricter controls on ozone precursors likely would have co-benefits of reducing emissions of carbon dioxide and other greenhouse gases.

Extreme Heat in Summer 2010: A Window on the Future

As the Eastern U.S. scorches, there more extremely hot days on the horizon.