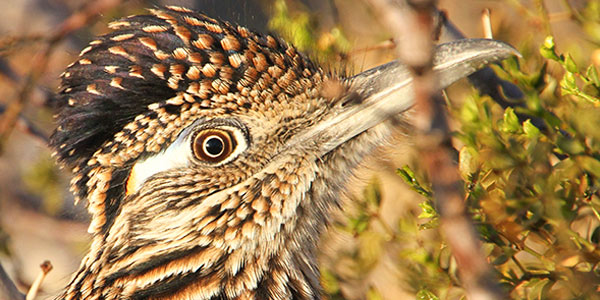 With speeds upward of 25 miles (40 kilometers) an hour, roadrunners definitely earn their name. They are quick on the ground without losing their ability to fly, and will fly short distances to perch on branches, posts, and rocks. Greater roadrunners—members of the cuckoo family—are about two feet (0.6 meters) tall with long, thin legs. They have mottled brown-and-tan feathers. The tail is long and sticks out to help the roadrunner balance when standing and running. Roadrunners have a crest at the top of the head that can puff up when the bird is trying to communicate with other roadrunners. Roadrunners call with a series of "coo" sounds.

Greater roadrunners live year-round in Texas, Oklahoma, New Mexico, Arizona, and southern California. They can be seen in deserts, brush, and grasslands on the ground or sitting on low perches, such as fences. Predators of roadrunners are raccoons, hawks, and, of course, coyotes.

Greater roadrunners eat a wide variety of foods, including rodents, reptiles, small mammals, and insects. Due to the harsh environment of the Southwest, roadrunners will eat whatever is available. As desert-dwellers, they get much of the water they need from the prey that they eat.

Greater roadrunner pairs may mate for life. A male greater roadrunners put on displays to tempt a female to mate. Sometimes the male will dangle a food offering, such as a lizard or snake, from his beak to entice the female. Other times, the male will wag his tail while bowing and making a whirring or cooing sound, then he jumps into the air and onto his mate.

The breeding and nesting seasons vary by region. In regions where there is one rainy season, the birds nest only in the spring. Where there's more rain, and thus more food resources, they will nest again in August and September. Greater roadrunners can have between two and eight eggs per brood, which are white or pale yellow. Greater roadrunners are occasionally brood parasites, which means they rely on other birds to raise their young. For example, roadrunner eggs have been observed in the nests of the common raven and the northern mockingbird.

Young can run and catch their own prey about three weeks after hatching. Sexual maturity is reached at two to three years of age, and the greater roadrunner's lifespan is seven to eight years.

Greater roadrunners are not federally listed as threatened or endangered. However Southern California has seen a significant drop in roadrunner numbers over the past few decades. Threats to roadrunners include illegal shooting and habitat loss, as roadrunners need room to roam and development fragments their territories and eliminates prey and nest sites. Pedestrians and traffic can also displace or kill roadrunners.

Roadrunners like to sunbathe. They will ruffle their back feathers to allow for sunlight to warm the skin below.