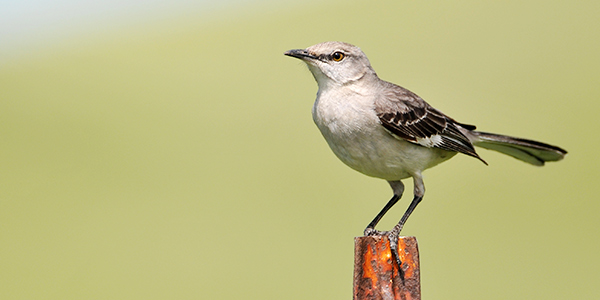 The northern mockingbird's Latin name means “many-tongued mimic,” because rather than singing their own songs, the birds learn and repeat the songs of other species. An individual can learn up to 200 songs during its lifetime. In addition to birdsongs, northern mockingbirds repeat dog barks, musical instruments, and sirens.

Northern mockingbirds are medium-sized songbirds with gray to brown body coloration and a lighter underbelly. Their wings are rounded with white patches on the upper and lower surfaces, which are visible when the wings are outstretched. Male mockingbirds are slightly larger than females. The bird's average wingspan is 12 to 14 inches (30 to 36 centimeters).

Originally found in the South, northern mockingbirds made a major range extension up both coasts toward Canada in the 1900s. Today they are found in the majority of the continental United States and in Canada and Mexico. Some of the northernmost populations may migrate south over winter.

Forest edges and open areas are prime habitat for northern mockingbirds. They can be easily seen because they sit atop high structures and forage for insects and berries in open areas, especially in parks and suburbs. These birds are territorial and use a high perch as a defensive lookout post.

Insects, fruit, and seeds make up the bulk of the northern mockingbird's diet. In the late spring and summer, these birds feed heavily on insects, especially beetles, grasshoppers, caterpillars, ants, and wasps. In the fall and winter, the mockingbird relies more heavily on berries and wild fruits.

These birds repeat other species' birdsongs, but they don't just do it randomly. It appears males have two separate, seasonal sets of songs—one for spring and one for fall. Both males and females sing, but males are louder and more often active throughout the year than females. Unpaired males sing 24 hours a day during the breeding season. Once a male has courted a mate by elaborately displaying his flight and singing capabilities, the pair may stay in a monogamous mating relationship over many breeding seasons, or one male may mate with many females. The bird's lifespan in the wild is up to eight years, but captive northern mockingbirds have lived to age 20.

Northern mockingbirds reached an all-time low along the East Coast in the 1800s because so many were captured for use as pets. Since then, their numbers have rebounded significantly.

The northern mockingbird is the state bird of Florida, Tennessee, Mississippi, Arkansas, and Texas, making it the third most popular state bird behind the northern cardinal and the western meadowlark.