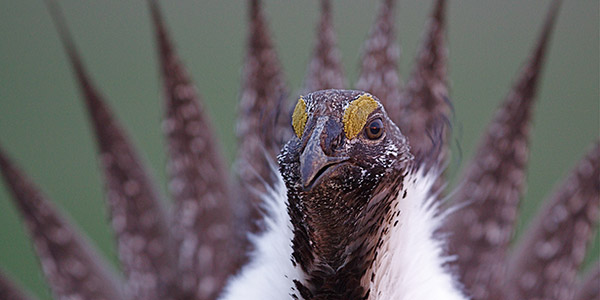 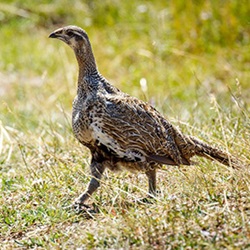 Every spring across America’s sprawling sagebrush sea, iconic greater sage-grouse congregate at breeding sites to begin a new mating season. Here the males, well-known for their spiky tail feathers and white puffed-up chests with yellow sacs, put on a flashy dance to draw the attention of nearby females.

The feathers of these ground-dwelling, chicken-like birds are mottled brownish-gray. Females are smaller and less colorful than males. While males may reach 26 to 30 inches long and weight between four and seven pounds, females average between 19 and 23 inches in length and weigh between two and four pounds.

The greater sage-grouse is a signature species of the sagebrush steppe, where they depend on sagebrush plants for food, cover, and roosting. The bird’s range across the American West includes California, Nevada, Oregon, Idaho, Utah, Colorado, Wyoming, Montana, North Dakota, and South Dakota. Isolated populations are also found in Washington State.

After hatching, greater sage-grouse chicks eat mostly insects, which provide protein for the growing birds. As the birds grow into adults, they make the transition from insectivore to herbivore. Forbs make up the majority of the bird’s diet in the summer and early fall. In the winter, they almost exclusively consume sagebrush leaves and buds. Unlike other some birds, greater sage-grouse do not swallow and hold gizzard stones—rocks that sit in a bird's gastrointestinal tract—so they are unable to digest seeds and nuts. 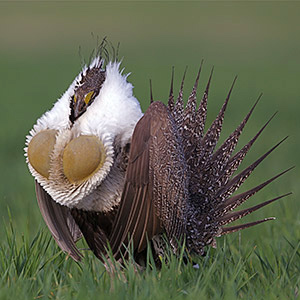 Male greater sage-grouse assemble at communal display grounds—called leks—to strut their stuff in the hopes of wooing a female. To make a good impression, the males fan out their spiked tail feathers and inflate their bright, bulbous chest sacs. When the bird inhales enough air to fill the sacs, his chest almost resembles a pair of sunny-side-up eggs.

The male’s dance includes swishing his wings and letting out a series of low cooing sounds. The coos are followed by two popping sounds with a whistle in between. As a finale, the male raises his head and lets out a huffing sound. Females also produce calls to get the attention of males on the leks.

After males have performed their displays and a female’s mated with a chosen male, the female assembles a bowl-shaped nest under a sagebrush plant and lines it with leaves, grasses, twigs, feathers, and forbs. She may lay anywhere between 4 and 11 eggs per clutch. Eggs hatch after roughly 25 to 30 days of incubation. Within minutes of hatching, a chick is able to feed itself. Chicks usually begin to fly when they’re between two and three weeks old.

Females raise their chicks until the fall, when greater sage-grouse split into their winter flocks. On average the birds live between three and six years, though some can live up to nine years.

Factors such as oil and gas development, land conversion for agricultural use, climate change, and human development have reduced the greater sage-grouse's habitat to half of its historic range and caused the bird’s numbers to decline by more than 90 percent.

In 2010 the U.S. Fish & Wildlife Service found the greater sage-grouse to be "warranted but precluded" from listing under the U.S. Endangered Species Act due to higher conservation priorities, but identified the bird as a candidate for future listing. In 2015 the United States' Bureau of Land Management and the U.S. Forest Service, with input from western states and a diverse group of stakeholders, wrote and approved conservation plans for the bird. This collaborative conservation framework led the U.S. Fish & Wildlife Service to decide not to list the species. Opening up these plans could undermine the framework and make species recovery efforts more difficult.

The National Wildlife Federation is actively working to protect the greater sage-grouse and the sagebrush steppe it calls home, which sustains not only the bird, but many of America’s cherished species.

Though they prefer to walk, greater sage-grouse have been recorded flying up to 48 miles an hour. Because their short legs make it difficult to run, they usually fly or hide to evade a threat.