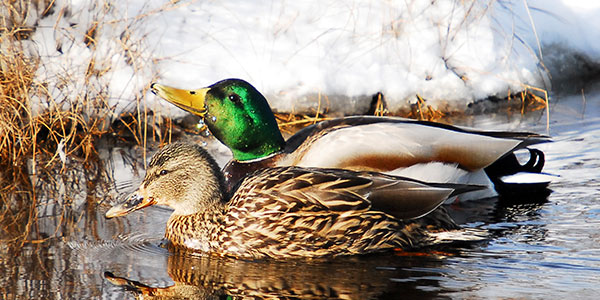 Mallards are one of the most recognizable ducks in the world. The male birds have special colorful plumage during the spring and summer breeding season that helps them attract females. Their heads and necks are bright green, and at the base of their neck is a white ring. Breeding male mallards also have a dark brown chest, and the sides and most of the wings are gray. The tail is white and black, and the bill is yellow.

In contrast, females and non-breeding males do not have showy feathers. The females are mottled tan and brown. The head is a lighter tan with dark streaks near the crown and eyes. The bill has an orange tint with dark markings. Non-breeding males look similar to the females, except they have a yellowish bill.

All mallards have a blue speculum that is visible when the birds are in flight. The speculum is a distinctive patch of color on the wing near the shoulder, which often helps identify the species. On mallards, the speculum is purplish-blue and outlined in white.

These ducks are common throughout the continental United States and are a non-native introduction to the Hawaiian Islands. Two populations of mallards exist in Hawaii; one group is a winter visitor and the other stays year-round. Mallards are often seen swimming around ponds, marshes, and even man-made water sources, such as pools and fountains.

Mallards are foragers and will eat a wide variety of foods. The ducks prefer to forage in shallow water, where they can dip their heads down to reach aquatic plants. They will also eat animal matter, including insect larvae, earthworms, and snails. When migrating, mallards will opt for lots of seeds and grains. Young ducklings eat mostly aquatic insects.

Mallards form nesting pairs in the fall and winter. Females can lay between 5 and 15 eggs, which she incubates for 26 to 30 days. The young leave the nest within a day of hatching, led to the water by their mother.

A mallard usually lives for 5 to 10 years in the wild. The oldest known mallard was a male that lived to be 27 years old.

Mallards are very common ducks with stable populations and are not a species of concern.

Listening for a female mallard may be easier than spotting one because females call out the familiar "quack" that's associated with ducks. Male mallards are silent, except when fighting another male.