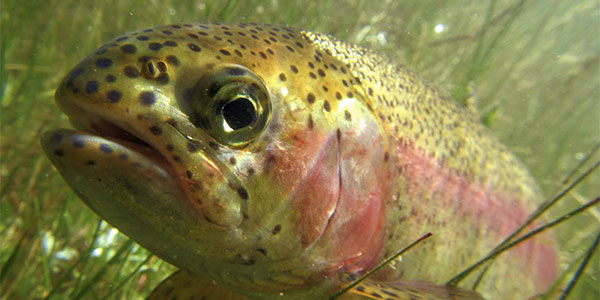 Adult rainbow trout and steelhead range in size. They can reach 45 inches in length, but are usually much smaller. They can weigh more than 50 pounds (22 kilograms), but a more typical weight is 8 pounds (3.6 kilograms). Because steelhead spend two to three years in freshwater followed by two to three years in the ocean, they are typically larger than rainbow trout, which live all of their lives in fresh or sometimes brackish water.

Both rainbow trout and steelhead are native to North America west of the Rockies, but this popular fish has been introduced in almost every other state and on every continent except Antarctica. All rainbow trout and steelhead occupy freshwater streams or lakes at some point in their lives. They use aquatic vegetation, boulders, and wood as protective cover. Steelhead spend the majority of the year in estuaries or open ocean and only return to freshwater to spawn.

Rainbow trout and steelhead have a varied diet and will feed on just about anything, such as zooplankton when they’re young, and as they mature, fish eggs, small fish, crustaceans, mollusks, insects, and even mice. In habitats that are dense with aquatic vegetation, rainbow trout often have the opportunity to eat arthropods that fall into the stream.

These fish are specially adapted to several different lifestyles. Some populations will stay in the same stream their whole lives. Others, because they are anadromous, spend their lives at sea and come back to the stream of their birth to spawn. When spawning, females dig out a depression called a redd in the gravelly bottom of stream riffle. She deposits her eggs in the depression and the male fertilizes them. They are covered up by the gravel and will remain there to hatch.

Unlike a salmon, which dies after spawning, steelhead trout can spawn, return to the ocean, and migrate back upstream to spawn several times. Some offspring of two steelhead can stay in freshwater and be resident trout, and two offspring of resident rainbow trout can create a steelhead. Their lifespan is four to six years in the wild. The largest rainbow trout ever caught was estimated to be 11 years old.

Because they’ve been so widely introduced, rainbow trout are not at risk of extinction. They are even considered a pest species in some places where they aren’t native. Native populations, though, are threatened by disease, habitat degradation, and fishing. Dam construction has hindered the ability of rainbow trout to migrate upriver, which is necessary for their reproductive cycle. One of the most notable diseases affecting rainbow trout is whirling disease—a parasitic ailment that causes skeletal deformities and death in young, hatchery-raised rainbow trout. Some native populations are federally listed as endangered. One of the main problems with rainbow trout is hybridization with other trout, including non-native species.

A group of rainbow trout is called a hover.