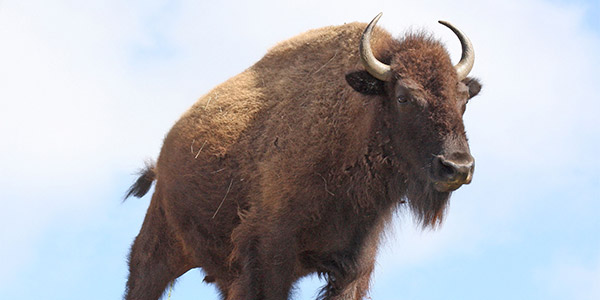 This animal's true name is the American bison, but most people call them buffalo. Bison are the largest terrestrial animal in North America. They can stand up to six feet (1.8 meters) tall. A male can weigh upwards of a ton (900 kilograms), and a female can weigh about 900 pounds (400 kilograms). Along with their formidable size, bison have several unique traits that help to identify them. One of the most noticeable is the hump on their shoulders. Another characteristic is their deep brown fur, which can grow very long, especially around the face and head. Bison also grow a long beard and mane. The head of a bison is very large with a thick skull. Bison fight by crashing their heads or horns together. Both male and female bison have short, curved, black horns, which can grow to two feet (0.6 meters) long.

Before human intervention, bison once ranged over much of North America, including central Canada and most of the interior United States. The only places free of bison were along the coasts and deserts. Today bison are only wild in national parks, state parks, and reserves. Your best chance of seeing wild bison are to visit Yellowstone National Park or Wood Buffalo National Park of Canada. American bison like open plains, savannas, and grasslands. Despite their immense size, bison still have to worry about predators. Buffalo calves can easily become the prey of a wolf pack or grizzly bear.

American bison are herbivores. They like low growing grasses and sedges. Bison are constantly on the move and even walk while they eat.

Bison exhibit some odd behaviors throughout the year. They roll around in dirt, create depressions (wallows) in soil with their immense weight, and take dust baths. Bison even rub their horns on trees.

American bison like to live and travel in groups. For most of the year herds are divided by sex, with females and calves in one herd and males in another herd. When the breeding season begins in the summer, many males temporarily join the female herd and begin looking for a mate. Bison communicate by hearing and smell. The most important communication is done with pheromones and smells, especially during reproduction. Bison also grunt, snort, and growl.

The dominant bulls (male bison) choose a female and defend her against other males through fighting. The males might butt heads or use their horns. Once the female agrees to mate, the pair mates several times.

The cows (female bison) are pregnant throughout the fall, winter, and early spring. The calves are born in mid-spring to increase the likelihood of surviving the next winter. Most cows only have one offspring. Each calf weighs about 50 pounds (23 kilograms) and has reddish fur. Within an hour after birth the calf stands and, soon after, begins to walk.

The cows will care for their young for about a year—however, the calves learn to be independent pretty quickly. By the middle of their first winter, juvenile bison are feeding independently and have the typical brown fur of the adults. It will be two to three years for the females, and upward of six years for the males, until they can breed themselves.

Winter can be very hard on bison. The cold and lack of food can take its toll, especially if the bison is sick, injured, young or old. Very young bison have the highest risk of dying over the winter. The average bison that survives to adulthood can live around 20 years. Captive-raised bison typically live longer.

Bison once dominated the grassland and prairie ecosystems of the United States. When the first explorers came to the Great Plains, it is estimated that at least 30 million bison roamed the land. By 1900, a little over a thousand bison could be found with only a handful of wild bison left in Yellowstone National Park.

Their numbers dwindled because, even with speeds of more than 30 miles (48 kilometers) an hour, bison could not outrun hunters. Some bison were killed for food, but often they were killed in large numbers just for fun. In addition, starting after the Civil War, bison were exterminated to make way for farmland as people settled the Great Plains.

The 1900s brought a change of fortune to the bison. Conservationists, ranchers, and land owners began to see the importance of the bison to the American west ecosystem and indigenous cultures. They were bred, protected on federal lands, and brought back from the brink. Most bison today are not pure wild bison, but have been crossbred with cattle.

The National Wildlife Federation is actively working to restore populations of wild bison.

1. American bison are the only wild cattle species native to North America.

2. Bison were once the most widespread herbivore species on the continent, only absent in the U.S. from the coasts, the deserts of Southern California, Nevada, Arizona and New Mexico, and from northern New England.

4. As grazers, bison use their huge heads as snow plows in winter to uncover vegetation to eat.

5. Though often called buffalo, bison are not closely related to the true buffalo species of Africa and Asia.