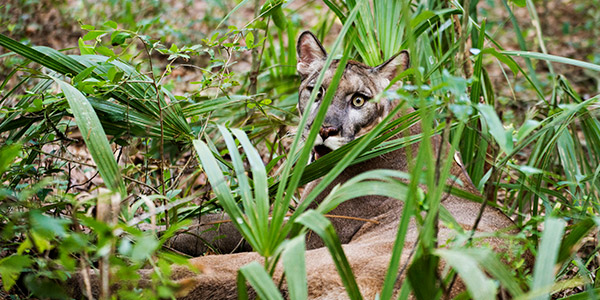 Florida panthers are a subspecies of the mountain lion. They are large, tan cats—their bodies are mainly covered in tawny-beige fur, except for the whitish-gray belly and chest. Black markings decorate the tip of the tail, ears, and around the snout.

Florida panthers are about six to seven feet (1.8 to 2.1 meters) long, with males growing bigger than females. A good way to tell a Florida panther from other subspecies of mountain lion is by looking at the tail and back. Florida panthers usually have a crooked tail and a unique patch of fur on the back. The back fur is almost like a cowlick, not conforming to the rest of the panther’s fur. These are not true subspecies differences, however, because kinked tails and cowlicks are a negative consequence of inbreeding and poor genetic variation. Florida panthers often suffer these traits because their populations had been so low in the past that multiple generations of inbreeding were unavoidable. Over time, the prevalence of kinked tails and cowlicks has decreased as Florida panther populations have begun to grow once again.

The historic range of the Florida panther extended from Florida to Louisiana throughout the Gulf Coast states and Arkansas. Today the only place with wild Florida panthers is the southwestern tip of Florida. Florida panthers utilize a diversity of warm climate habitat, living in wetlands, swamps, upland forests, and stands of saw palmetto.

Florida panthers are territorial and solitary, unless a pair is mating or a female is raising kittens. They use pheromones and physical signs (like claw markings or feces) to define their territory. Males roam much larger territories than the females. A male can make a territory more than 200 to 250 square miles in size.

In the mating season of November to March, males venture out to find a female mate. After they breed, the female is pregnant for about three months. She gives birth to a litter of one to three kittens. Not all kittens will survive into adulthood.

At birth, the kittens are born covered in dark spots. The spots help camouflage the kittens under forest debris. The kittens are vulnerable to predators, especially right after birth when they are blind. As they develop, the spots fade away and they look more and more like adult panthers. The kittens stay with their mother for about a year and a half before they leave to form their own territories. Florida panthers live about 12 years in the wild, but with such a small population of Florida panthers left, they are very susceptible to disease, genetic disorders, and car accidents.

The Florida panther is the only subspecies of mountain lion that remains in the eastern United States. Hunting decimated the population badly, and it was one of the first species added to the U.S. endangered species list in 1973. The Florida panther's current status is listed as endangered.

During the 1970s, only about 20-30 Florida panthers remained in the wild. Today, there are just over 200 left in the wild. They are found in southern Florida in swamplands such as Everglades National Park and Big Cypress National Preserve. The subspecies is so critically endangered that it is vulnerable to just about every major threat. Because the population is so small, low genetic diversity is a concern. In addition, construction causes habitat loss, and roads and highways pose a danger to panthers attempting to cross. The cats are also faced with mercury pollution and diseases such as feline leukemia. A general fear and misunderstanding of Florida panthers prevents reintroductions to new areas.

Not all large cats roar—in fact, Florida panthers can’t roar at all. They purr, hiss, snarl, growl, and yowl to communicate.