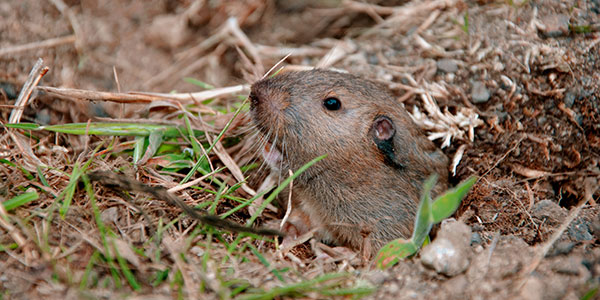 Pocket gophers are fossorial rodents named for their fur-lined cheek pouches. Their cheek pouches, or pockets, are used for transporting bits of plant food that they gather while foraging underground. They have special adaptations for their burrowing lifestyle, including clawed front paws for digging, small eyes and ears, and sensitive whiskers and tails. They’re also able to close their lips behind their long incisors so they can use their teeth to loosen soil without getting any dirt in their mouths. Pocket gophers are medium-sized rodents that range in length from 5 to 14 inches.

The most widespread North American species is the plains pocket gopher, which is found throughout the Great Plains region. Several other species are found in the West and Southeast. Loose, sandy soil with edible plant cover is the best habitat for pocket gophers. Often this means pocket gophers make their homes in lawns and crop fields, much to the dismay of homeowners and farmers. Voracious pocket gophers can leave unsightly dirt mounds in yards, and they readily feed on ornamental garden plants. In their native range, however, pocket gophers are beneficial components of ecosystems. They move enormous amounts of soil every year, and therefore help to aerate the soil. This is especially important when soil has been compacted by grazing livestock or agricultural machinery. The tunnels also serve to capture snowmelt and rainfall that would otherwise run over the soil surface and cause erosion. Abandoned tunnels provide habitat for a number of other species, and the waste left behind by pocket gophers fertilizes the soil.

Pocket gophers face numerous threats from predators. They are eaten by animals that are able to follow them into burrows, such as weasels and snakes. Canines and badgers dig them out of the ground, and if pocket gophers leave their tunnels, owls and hawks are happy to snatch them up.

Roots, tubers, and the occasional aboveground plant provide all the necessary nutrients to these hungry rodents. Pocket gopher teeth are well-adapted for their vegetarian diet. Their incisors are ever-growing, which compensates for the tooth wear incurred while chewing on hard, gritty materials. Pocket gophers also have flattened molars and premolars, which are perfect for grinding vegetation. They are the only natural force that seems to be able to limit the growth of quaking aspen—they can chew the root systems back faster than they can grow back.

Pocket gophers are solitary animals that only come together in the spring and summer to breed. Young pocket gophers are born in nest chambers underground. The mother takes care of the young for several weeks before sending them on their way to construct burrows of their own. Pocket gophers generally live less than three years, which is typical for small rodents.

Most pocket gopher species are relatively common and not of conservation concern. The desert pocket gopher is the most threatened species because it occupies a very small range and is thus more vulnerable to habitat loss.

Pocket gophers are sometimes confused with their fossorial relatives, moles. There are several easy ways to tell the two groups apart. Moles have small teeth and tiny, unapparent eyes. Pocket gophers have long incisors that protrude from the mouth, and their eyes are easy to see. In addition, mole tunnels leave raised ridges in the ground, whereas pocket gopher tunnels do not.