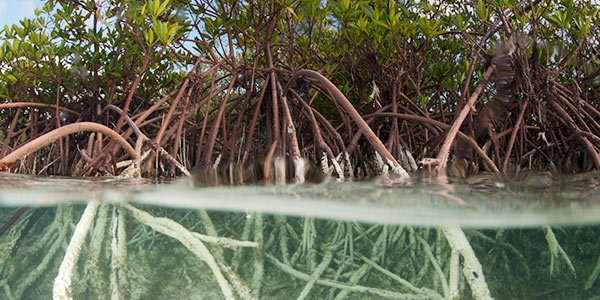 The term “mangrove” applies to an array of salt-tolerant tropical trees or shrubs. Of the more than 50 species of mangrove worldwide, four are found in the United States, and one of the best known is the red mangrove. Red mangroves, which are broad-leaved evergreen trees, are easily identified by their remarkable aboveground prop roots that transport air to their waterlogged belowground roots. In the tropics, red mangroves grow to more than 80 feet (24 meters) in height. In the U.S., however, the trees rarely grow beyond 20 feet (6 meters), which gives them a shrub-like appearance.

In the U.S., red mangroves are native to Florida, Puerto Rico, and the Virgin Islands, but they are also present as an exotic species in Hawaii. Red mangroves grow at sea level right along the shore. Tangles of prop roots along the coast trap sediment that moves with the tide, which gradually builds up soil around the plants. Red mangroves, together with the other three U.S. mangrove species—black mangroves, white mangroves, and buttonwood—form vast coastal forests.

Small, yellow flowers blossom on red mangroves and are pollinated by wind. The seeds then sprout roots while still on the tree. After a few months, the seed drops to the ground and can immediately begin to grow. Seeds that drop into the water float along until they reach a suitable area to put down their roots.

Mangrove forests are an incredibly important ecosystem in the Southeast. Red mangroves are particularly significant, because as they are found at the water’s edge, their submerged roots provide a nursery habitat to fish and crustaceans. They also provide a habitat for a number of mammals, birds, and reptiles, including species of concern like American crocodiles, Florida panthers, and West Indian manatees. People living along coastlines with healthy mangrove forests receive great benefits from the trees. During intense storms, mangrove forests act as a buffer, reducing wave action, preventing erosion, and absorbing floodwaters.

There are some natural threats to red mangroves, such as frost and hurricanes, but the majority of mangrove decline is human-induced. Habitat destruction and pollution are two of the greatest threats to red mangroves. Climate change is another factor that could have serious impacts on mangrove forests. As temperatures warm and the sea rises, mangroves will be forced landward out of their current habitats. Slow-growing species may not be able to keep up with these changes.

Red mangroves are sometimes called “walking trees” because their continuously growing prop roots make them look like they are walking on water.