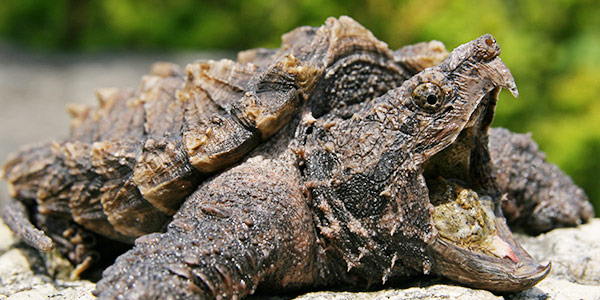 Alligator snapping turtles are sometimes described as dinosaur-like because of their spiky shells and primitive-looking faces. They have three pointed ridges along their shells that run from head to tail. Unlike all other species of snapping turtle, this one has eyes on the sides of its head.

Alligator snapping turtles are found exclusively in the United States, from northern Florida to eastern Texas and as far north as Iowa. They are almost exclusively aquatic, and tend to stay submerged and motionless for so long that algae begins to grow on their shells. They can go 50 minutes before needing to surface for a gulp of air. Except for egg-laying females, these turtles almost never come on land. River systems, lakes, and wetland comprise their preferred habitats.

Their specially adapted tongue allows them to catch prey with little work—a lure-like projection of the tongue attracts curious fish that swim right into the turtle’s mouth. To attract an unsuspecting victim, this turtle will lay on the bottom of the riverbed and open his jaws to reveal what looks like a delicious bright red wriggling worm, luring prey by fiendishly twitching this appendage back and forth. A fish that gets duped by the turtle’s tongue will swim right into the range of the hungry predator’s jaws.

They can also actively search for prey by tasting chemicals in the water that are indicative of a particular species. This way, even when their prey is hiding in the sediment, they can still sense them.

These solitary reptiles spend much of their time in the water—even capable of holding their breath for 40 to 50 minutes. They venture onto land to nest with females. Correlated with a solitary lifestyle, there is little structure and no parental care to their young.

Adults mate in the spring and females lay eggs two months later. The eggs hatch after 100 to 140 days. The incubation temperature of the nest determines the gender of the offspring—females develop in warmer temperatures and males develop in cooler temperatures. The newly hatched turtles are similar to the adults in appearance. Eggs and juveniles are consumed by fish, raccoons, and birds, but the only predator of fully grown adults is humans. Reproductive maturity is reached at 11 to 13 years. The turtle’s typical lifespan in the wild is between 11 and 45 years, but captive alligator snapping turtles have lived to 70 years of age.

Alligator snapping turtles are declining due to habitat degradation and overharvesting for their meat. They are not an endangered species, but some states have imposed bans on collecting them from the wild.

Some myths claim that alligator snapping turtles are known to attack people, but this isn’t the case. But with a bite force of 1,000 pounds, their powerful jaws can snap through bone—so they should never be handled in the wild.