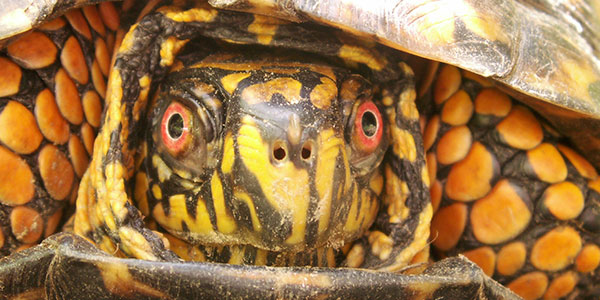 Eastern box turtles are one of the most commonly seen turtles in the wild. The reptile’s carapace is dome-shaped and covers most of its body, and has ridges and furrows that develop with age. The upper part of the turtle’s mouth is slightly hooked, and its toes are slightly webbed. On average, an eastern box turtle is about five to six inches (13 to 15 centimeters) long.

Eastern box turtles are usually found near ponds, fields, meadows, and woodlands throughout the eastern half of the United States. Although eastern box turtles are native to the eastern United States, they can sometimes be seen in other states. This is because box turtles are very popular pets, and sometimes when people do not want them anymore, or they move, they release the turtles into the wild. This might seem helpful to the turtle, but it’s actually very difficult for a domestic turtle to survive in such a different environment. Instead of releasing pets into the wild, it’s better to drop them off at a local animal shelter or veterinarian.

Box turtles like warm weather, but if it gets too hot, they will seek some protection from the sun. In the heat of the day, they will hide under logs or leaves or take a swim in a pond. If it is not too hot, then eastern box turtles can be found searching for their next meal or basking in the sun.

These turtles are omnivorous and will eat almost anything, including berries, insects, roots, flowers, eggs, and amphibians. Younger turtles tend to be more carnivorous than adults, hunting in ponds and streams for food. As adults, box turtles primarily feed on land.

In northern regions this diurnal species hibernates, burrowing itself in stream bottoms, stump holes, or mammal burrows. They have even been observed hibernating in the same space year after year.

Box turtles also have an effective technique for defense. When threatened, they will retract all of their limbs into their shell and clamp it shut. Very few predators can effectively prey upon adult box turtles because of this technique.

Box turtles mate from April to October, with nesting occurring from May through July. A box turtle usually has one clutch per year, with between two and eight eggs in each clutch. The turtles dig nests several inches below the soil. Incubation usually lasts three months, but is somewhat dependent on the soil’s temperature and moisture. As in other turtle species, the temperature of the nest determines the sex of the hatchlings. Warmer nests tend to produce females, while cooler nests produce males. Eastern box turtles reach maturity at 10 to 20 years old and can live to be more than 100 years old.

The eastern box turtle is not considered endangered on a national level. However, some states—including Michigan, New Hampshire, Massachusetts, and Connecticut—list the animal as a species of special concern, and Maine lists the turtle as endangered. Habitat loss, traffic incidents, and collection for the pet trade are all factors contributing to its decline.

After successful mating, a female may lay fertile eggs for up to four years.