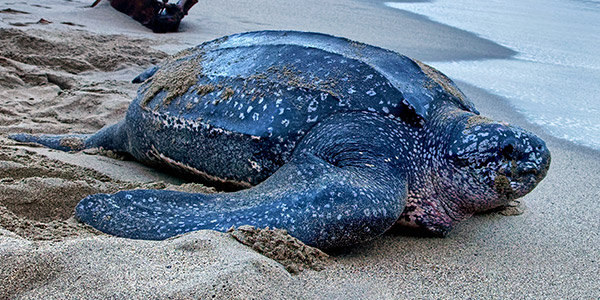 The leatherback sea turtle is the most unique of all sea turtle species. As the only living member of the family Dermochelyidea, they are the largest living turtle species and have the greatest migratory distribution of any reptile on the planet. Its distinguishing feature is its carapace, which has a smooth, leathery skin that covers a flexible matrix of bone. This carapace is highly specialized for diving to extreme depths of up to 4,000 feet (1,219 meters). In addition, a unique thermoregulatory adaptation allows leatherbacks to maintain core body temperatures at these extremely cold depths.

Unlike other sea turtles, the bony shell of the leatherback is not visible. Instead it’s covered by a leathery layer of black or brown skin, hence the turtle’s name. The shell has seven ridges running from front to back. Leatherbacks are the largest of the seven living sea turtle species, growing to more than 6.5 feet (two meters) in length and weighing up to 2,000 pounds (900 kilograms).

Leatherbacks are found in tropical and temperate marine waters all over the world. They live off both the east and west coasts of the United States, and also in Puerto Rico, the Virgin Islands, and Hawaii. Leatherbacks spend most of their lives at sea and sometimes look for prey in coastal waters.

Jellyfish make up the biggest portion of their diet, but they also eat seaweed, fish, crustaceans, and other marine invertebrates. Leatherbacks have downward-pointing spines in their throat, which allows jellyfish to be swallowed, but prevents them from coming back up.

The migratory and pelagic lifestyle of the leatherback turtle makes it extremely difficult to investigate the ecology of this species at sea, which in turn hinders the conservation of this reptile at a global scale. The majority of our knowledge on the leatherback turtle comes from studying them during their reproductive phase when females migrate to tropical areas where they ascend onto beaches to nest.

Adult leatherbacks have few natural predators, but their eggs and newborns are preyed upon by many animals, including birds, raccoons, and crabs. Female leatherbacks tend to return to the same nesting area to lay their eggs. Their large size makes them opportunistic in selecting a nesting beach. Like most reptiles, temperature determines the gender of the offspring—if it’s warm inside the nest, females will be born. Likewise, if temperatures are cooler, males develop. Once the eggs hatch, they’re on their own—the baby sea turtles must make it into the water and learn to fend for themselves without any care from their parents. Leatherbacks reach maturity at approximately 16 years old. Their average lifespan is unknown, but it’s thought to be at least 30 years.

Leatherback sea turtles are federally listed as endangered. Their biggest threats are the result of human activity. Clutches of eggs are often illegally poached, and the offspring that do hatch sometimes become attracted to beach resort lighting, so they crawl away from the sea instead of toward it. Adults are also victims of poaching, as well as entanglement in fishing gear. They are also susceptible to marine pollution and debris, sometimes ingesting plastic marine litter.

Climate change is major threat as well. Beach erosion caused by increased storm frequency and intensity is a major threat to nest success. Warming temperatures are a concern for the long-term reproductive success of the leatherback population. Temperature increases could lead to a greater prevalence in feminizing beaches, The identification of existing male-producing beaches will be of critical importance to population viability. Another threat related to climate change is the thermal expansion of oceans. Sea level rise could impact nesting beaches even sooner than changes in ambient temperatures.

Leatherbacks have been documented diving deeper than 4,000 feet (1,200 meters). By contrast, scuba divers typically descend to only about 100 feet (30 meters). Additionally, the Pacific leatherback is the fastest aquatic reptile and can reach speeds of 22 miles an hour (35 kilometers an hour).