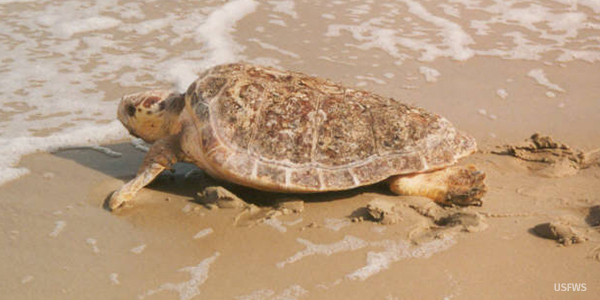 Loggerheads are named for their relatively large heads, which support powerful jaws and enable them to feed on hard-shelled prey, such as whelks and conchs. The adult loggerhead has a slightly heart-shaped, reddish-brown top shell consisting of five or more pleural scutes and a yellow bottom shell. Adult males are distinguished by long tails that extend beyond the rear carapace and a narrowing of the carapace that tapers towards the rear.

Hatchlings have light to dark gray or brown shells. Their flippers are dark brown with white edges and their belly is a faded yellow. Loggerheads in the southeastern United States weigh an average of 250 pounds (113 kilograms) and are generally about three feet (0.9 meters) long.

The loggerhead sea turtle is a wide-ranging species, occurring throughout the temperate subtropical and tropical regions of the Atlantic, Pacific, and Indian Oceans. In the Atlantic, the loggerhead turtle's range extends from Newfoundland to as far south as Argentina. In the eastern Pacific, loggerheads have been reported as far north as Alaska, and as far south as Chile. In the United States, occasional sightings are reported from the coasts of Washington and Oregon, but most records are of juveniles off the coast of California. The west coast of Mexico, including the Baja Peninsula, provides critically important developmental habitats for juvenile loggerheads. The only known nesting areas for loggerheads in the North Pacific are found in southern Japan.

The majority of loggerhead nesting occurs in the western rims of the Atlantic and Indian Oceans, primarily in Oman, the United States, and Australia. The greatest nesting concentrations in the U.S. occur on beaches from North Carolina through southwest Florida, and minimal nesting extends westward into the Gulf of Mexico to Texas and northward to southern Virginia. Of the loggerhead nesting activity within the southeastern U.S., about 80 percent occurs along the central Atlantic coast of Florida. In Brevard and Indian River Counties, a 20-mile section of coastline from Melbourne Beach to Wabasso Beach comprises the Archie Carr National Wildlife Refuge (ACNWR), which is the most important loggerhead nesting area in the western hemisphere. Nesting densities of 1,000 nests per mile (625 nests per kilometer) are recorded for beaches within the ACNWR.

Adult loggerheads are known to make extensive migrations between foraging areas and nesting beaches. During non-nesting years, adult females from U.S. beaches are distributed in waters off the eastern U.S. and throughout the Gulf of Mexico, Bahamas, Greater Antilles, and Yucatán. Loggerheads can be found hundreds of miles out to sea or in inshore waters—bays, lagoons, salt marshes, creeks, ship channels, and the mouths of large rivers. Coral reefs, rocky places, and ship wrecks draw large amounts of marine life and are great feeding areas.

Loggerheads are carnivores that eat crustaceans, fish, and other marine animals. The hatchlings feed on small animals living in the floating mats called sargassum, where they spend their early developmental years. Once they reach a certain size, these juvenile loggerheads begin "recruiting" to coastal areas in the western Atlantic where they become benthic feeders in lagoons, estuaries, bays, river mouths, and shallow coastal waters. Juveniles and adults eat mostly bottom-dwelling invertebrates such as whelks, other mollusks, horseshoe crabs, and sea urchins. Their powerful jaws are designed to crush their prey. These juveniles occupy coastal feeding grounds for a decade or more before maturing and making their first reproductive migration.

Many people have witnessed female loggerheads appearing to cry. While it might look like the turtle is sad, this is in fact a special adaptation. Loggerheads have salt glands near their eyes, allowing them to drink sea water and excrete the extra salt.

Female loggerheads are thought to reach maturity at about 35 years of age. Every two to three years, they mate in coastal waters and then return to nest on the very same beach where they were hatched, called the natal beach. Loggerheads occasionally nest along the shorelines of estuaries (places where rivers meet the sea, such as brackish bays) with suitable sand. Nests are typically made between the high tide line and the dune front.

The nesting season begins in April and ends in September, with the peak in June. They emerge onto the beach at night every 14 days, laying an average of four clutches containing roughly 100 to 120 eggs in each. The sex of hatchlings is determined by incubation temperature. Warmer temperatures result in the great majority being females and cooler temperatures produce mainly or only males. Scientists believe that loggerheads are long lived and could live to 50 years or more.

The loggerhead sea turtle was listed as threatened in 1978 under the Endangered Species Act and has received federal protection ever since. The migratory nature of loggerheads severely compromises conservation efforts once they move outside U.S. waters, however, since activities from legal and illegal fisheries in some countries are causing high mortality of loggerhead sea turtle nesting populations in the western north Atlantic region. In addition, loggerhead turtles also have long been hunted for their eggs and for leather production. Other threats include loss or degradation of nesting and foraging habitats; excessive nest predation; hatchling disorientation from beachfront lighting; marine pollution; accidental capture; watercraft strikes; and disease.

Loggerheads are protected by national laws, as well as international treaties and agreements. Additionally, NOAA’s National Marine Fisheries Service and the U.S. Fish & Wildlife Service conduct regular monitoring of loggerhead populations. Bycatch of loggerhead turtles (accidental capture by commercial and sport fishermen) is being reduced by fishing gear modifications (such as the use of TEDs, or turtle exclusion devices), changes to fishing practices, and closures of certain areas to fishing during nesting and hatching seasons. Many coastal counties and communities in Florida, Georgia, and South Carolina have developed lighting ordinances to reduce hatchling disorientations, and important U.S. nesting beaches have been and continue to be acquired for long-term protection.

The loggerhead is the most common sea turtle in U. S. coastal waters.