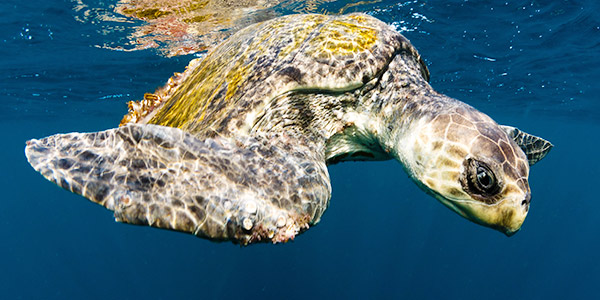 Olive ridleys are considered the most abundant sea turtle in the world. They get their name from the coloring of their heart-shaped shell, which starts out gray but becomes olive green once the turtles are adults. They have one to two visible claws on each of their paddle-like flippers. Western Atlantic olive ridleys usually have a darker coloration than eastern Pacific olive ridleys. Adult turtles are relatively small, averaging 2 to 2.5 feet (0.6 to 0.7 meters) in length and weighing 80 to 110 pounds (36 to 49 kilograms). The largest of these animals are observed on the Pacific coast of Mexico.

The olive ridley is found in the tropical regions of the Pacific, Atlantic, and Indian Oceans. In the Pacific, it prefers beaches of Mexico south to Colombia. In the Indian Ocean, its greatest abundance is in eastern India and Sri Lanka. Only a small and declining population of olive ridleys nest in the western Atlantic along the western coast of Africa.

Olive ridleys do not nest along coastal beaches of the United States, but do utilize waters of the southwestern U.S., and sometimes north to the Oregon coast during feeding migration. The olive ridley appears to be more of an open ocean inhabitant, unlike the Kemp’s ridley, which primarily inhabits shallow nearshore coastal waters.

The olive ridley is omnivorous, meaning it feeds on both plants and animals, including algae, lobster, crabs, tunicates, mollusks, shrimp, and fish. Olive ridleys can be found foraging for invertebrates to depths of about 500 feet (150 meters).

Unfortunately not much is known about the behavior of this turtle. Groups of turtles have been witnessed basking in the sun together to escape cold waters.

These sea turtles are solitary, preferring the open ocean. They migrate hundreds or even thousands of miles every year for the arribada (Spanish for “arrival”), when large groups of females return to the beaches where they hatched to nest. Arribadas are massive nesting aggregations where thousands of females arrive in simultaneous waves to lay their eggs. The stimulus for this event is unknown, creating a major element of unpredictability in timing at arribada sites.

Olive ridleys females usually nest one to three times per season, laying an average 100 to 110 eggs per clutch. Nesting intervals are approximately 14 days for solitary nesters and about 28 days for arribada nesters. The eggs incubate for 50 to 60 days. The age at sexual maturity may be similar to the Kemp’s ridley—approximately 10 to 15 years. Individuals surviving to adulthood may live up to 50 years.

Certain populations of olive ridleys are federally listed as threatened and endangered, and the sea turtle is internationally listed as vulnerable. Threats include harvesting for skin and meat, accidental capture (particularly in shrimp trawl nets and nearshore gill nets), and marine pollution.

Olive ridleys are protected by national laws, as well as international treaties and agreements. Additionally, NOAA’s National Marine Fisheries Service and the U.S. Fish & Wildlife Service conduct regular monitoring of olive ridley populations. Bycatch of olive ridleys (accidental capture by commercial and sport fishermen) is being reduced by fishing gear modifications (such as the use of TEDs, or turtle exclusion devices), changes to fishing practices, and closures of certain areas to fishing during nesting and hatching seasons. Important Mexican nesting beaches have been turned into reserves for the species and continue to be protected for long-term conservation.

Male olive ridleys can be distinguished from females by their tails, which stick out beyond their carapace.