Wildlife conservation is the preservation and protection of animals, plants, and their habitats. By conserving wildlife, we're ensuring that future generations can enjoy our natural world and the incredible species that live within it. To help protect wildlife, it's important to understand how species interact within their ecosystems, and how they're affected by environmental and human influences.

Plants and animals have life events that seemingly occur like clockwork every year. Birds can migrate, mammals may hibernate, flowers bloom, and leaves change colors. The study of how the biological world times these natural events is called phenology. Scientists now understand that plants and animals take their cues from their local climate (long-term weather patterns). Climate is impacted by non-biological factors—temperature, precipitation, and available sunlight. Species use the predictable yearly changes in the climate to determine when they start natural events such as breeding or flowering.

Climate change is slowly increasing average annual temperatures. One of the most noticeable ways that climate change is impacting wildlife is by disrupting the timing of natural events. With warmer temperatures, flowering plants are blooming earlier in the year and migratory birds are returning from their wintering grounds earlier in the spring. Phenology is an important subject for conservationists to study because it helps us understand the patterns of specific species and overall ecosystem health. Every species has an impact on those in its food chain and community, and the timing of one species' phenological events can be very important to the survival of another species.

The energy we receive from food can be traced back to the sun. As the sun shines, it radiates light energy. Plants absorb the light energy, convert it to sugars (photosynthesis), and produce energy for other wildlife. The energy from the sun moves its way through ecosystems by predators eating their prey. A food web breaks down how all the producers, consumers, and decomposers interact in an ecosystem and how energy is transferred between species.

When animals eat their prey, they consume more than just energy. They also absorb all the chemicals and nutrients inside the prey. Sometimes animals ingest pollutants that can become stored in their fat and tissues. Human-caused pollution has added heavy metals, oil, and industrial and pharmaceutical chemicals to the environment. Plants, fish, and other species absorb these toxins, and as they are eaten by predators, the toxins are then absorbed into the predators’ tissues. As the chain of predator and prey continues up the food web, the toxins become more concentrated and move higher and higher up the food web. The process that causes the concentration of a substance to increase as it moves up the food web is called bioaccumulation. The pollutants can have a disastrous effect on the food web and potentially kill species.

A natural disturbance is any event that causes a disruption to the current state of an ecosystem. Natural disturbances are caused by forces of nature, including weather, geology, and biological fluctuations. This may include fires, floods, earthquakes, diseases, and droughts. After a disturbance impacts an ecosystem, there can be devastation, but healthy ecosystems have an amazing ability to bounce back. Some ecosystems even depend on disturbances, such as the threatened longleaf pine ecosystem. Sometimes the ecosystem will go back to its former structure, with the same plant and animal species. Other times, the disturbance will create something new by allowing new species to populate the area.

Wild animals are always on the move. They move from place to place in search of food, mates, shelter, and water. Many animals do not have to move far in order to have all their needs met, but other animals—for example migratory birds, wolves, mountain lions, or butterflies—require much more space. Currently many species with large territories, including gray wolves, are threatened because habitat loss and fragmentation have limited their available space. Roads, fences, and buildings cut off habitat and force wildlife into smaller areas. Conservationists have to take into account the different spatial needs of wildlife when designing plans to protect them. They have to think about the territory size, different habitat types, and migration routes that wildlife need.

A wildlife corridor is a tract of land that connects different wildlife habitats (such as refuges, parks, or rivers) that might otherwise be separated by human development. Wildlife corridors provide many benefits to wildlife. With corridors, animals have a better opportunity of finding the basic necessities they need—food, water, shelter, and places to raise their young. Animals that require larger territories can access new habitats and maintain a healthy territory size. Wildlife corridors also promote genetic biodiversity. When more individuals of a species are interconnected, the gene pool becomes larger and more viable. Migratory wildlife benefit from corridors because they can move safely over long distances without having to come into contact with human developments or cars. Species are more likely to survive disturbances by having more undisturbed areas.

The National Wildlife Federation, in partnership with the Santa Monica Mountains Fund, is working to create a wildlife crossing for mountain lions in California. By linking protected habitat on either side of a freeway, mountain lions and other wildlife can the access to green space they need to survive. The Liberty Canyon Wildlife Crossing, when built, will be the largest such crossing in the world, and a model for urban wildlife conservation.

Unlike mammals, birds and butterflies travel from one place to another by flying, so they face different kinds of challenges. Not only do we have to protect their winter and summer habitat, but also key rest stops that migratory wildlife use along the way. Conservationists can help threatened bird and butterfly populations by protecting habitat along major migratory flyways—pathways used by migratory birds and insects. Birds tend to take predictable routes to get from the winter feeding grounds to the summer breeding grounds and back. Flyways usually occur along coastlines, major rivers, and near mountains. The United States has four main migratory flyways.

A great way to help birds and butterflies migrate is by building a Certified Wildlife Habitat® in your backyard or balcony. Learn how to provide a critical resting place and food source to help migratory birds reach their destination. 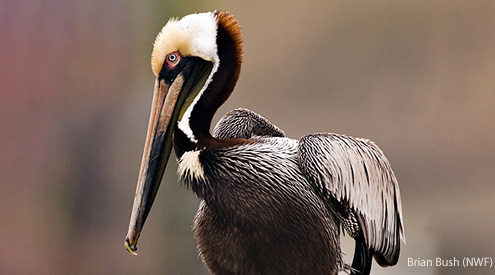 Species diversity is only one part of biodiversity. We also have to recognize the genetic diversity that exists within species, as well as the diversity of entire habitats and ecosystems. 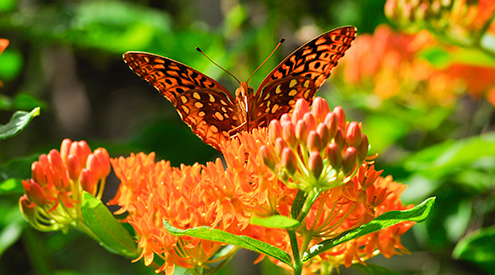 The Endangered Species Act has lists of protected plant and animal species both nationally and worldwide. 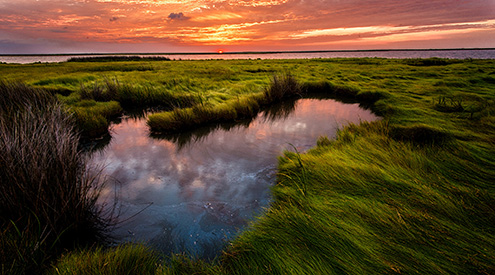 An ecosystem service is any positive benefit that wildlife or ecosystems provide to people. The benefits can be direct or indirect—small or large.