These striped rodents take on their world with resolutely individual attitudes 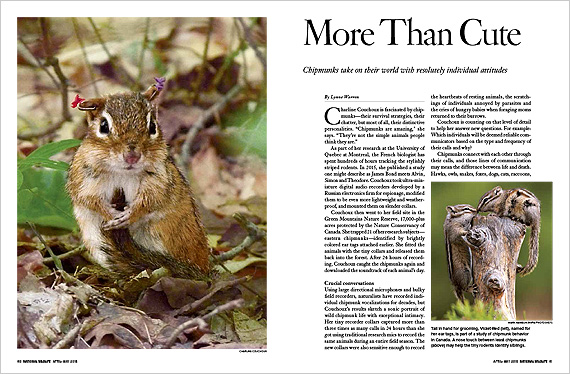 CHARLINE COUCHOUX IS FASCINATED BY CHIPMUNKS—their survival strategies, their chatter, but most of all, their distinctive personalities. “Chipmunks are amazing,” she says. “They’re not the simple animals people think they are.”

As part of her research at the University of Quebec at Montreal, the French biologist has spent hundreds of hours tracking the stylishly striped rodents. In 2015, she published a study one might describe as James Bond meets Alvin, Simon and Theodore. Couchoux took ultra-miniature digital audio recorders developed by a Russian electronics firm for espionage, modified them to be even more lightweight and weatherproof, and mounted them on slender collars.

Couchoux then went to her field site in the Green Mountains Nature Reserve, 17,000-plus acres protected by the Nature Conservancy of Canada. She trapped 21 of her research subjects—eastern chipmunks—identified by brightly colored ear tags attached earlier. She fitted the animals with the tiny collars and released them back into the forest. After 24 hours of recording, Couchoux caught the chipmunks again and downloaded the soundtrack of each animal’s day.

Using large directional microphones and bulky field recorders, naturalists have recorded individual chipmunk vocalizations for decades, but Couchoux’s results sketch a sonic portrait of wild chipmunk life with exceptional intimacy. Her tiny recorder collars captured more than three times as many calls in 24 hours than she got using traditional research mics to record the same animals during an entire field season. The new collars were also sensitive enough to record the heartbeats of resting animals, the scratchings of individuals annoyed by parasites and the cries of hungry babies when foraging moms returned to their burrows.

Couchoux is counting on that level of detail to help her answer new questions. For example: Which individuals will be deemed reliable communicators based on the type and frequency of their calls and why?

Chipmunks connect with each other through their calls, and those lines of communication may mean the difference between life and death. Hawks, owls, snakes, foxes, dogs, cats, raccoons, coyotes and weasels all prey on the tiny rodents. When a foraging chipmunk detects a predator it sounds an alarm, perhaps to warn others to scurry to safety. “Chips” (sharp, high-pitched calls) mean the predator is on the ground; “chucks” (which are lower pitched, like a stick rapping a hollow wooden block) signal danger from the air.

In areas where chipmunks live in high density, those chips and chucks can pack the airwaves. Researchers have found as many as 30 chipmunks living in a single acre of woodland where food, water and shelter are plentiful—and many of those animals are related.

Chipmunks start reproducing when they’re a year old. Youngsters are weaned and fending for themselves six weeks after birth, with males dispersing and females remaining near the maternal burrow. Once settled in a den, they stay close to home for the rest of their 2- to 3-year average lifespans, typically ranging over less than half an acre of habitat. So chipmunk neighbors may be kin, and it makes evolutionary sense for family members to warn each other of danger.

The significance of an alarm call isn’t always straightforward. “Chipmunks forage under a constant threat of predation,” says Couchoux. “Every day they’re faced with the trade-off: Eat, and risk being eaten. But individuals have distinct personalities and don’t all react the same way, even when facing exactly the same situation.”

Couchoux has witnessed this firsthand, recognizing some of her study subjects by their habits even before she notes the identifying colors of their ear tags (colors that also serve as names). For example, one familiar animal, Violet-Violet, explores at a walk, stretching her neck out and sniffing her surroundings rather than dashing into a new situation at a run, as some others do. And she’s very vocal, as are her offspring. “I saw her daughter Yellow-Yellow freaking out, running away and giving alarm calls just because a leaf fell on the ground beside her,” Couchoux says.

Timid Yellow-Yellow may be too easily startled to be deemed a reliable communicator. Other chipmunks may be more credible, signaling only when danger is real. Couchoux is continuing her research (supported in part by a Young Explorers grant from the National Geographic Society), and she hopes to discover how chipmunks decide who is trustworthy. It’s an important judgment: Running for cover burns energy, and abandoning a food source because of a false alarm may result in the food being taken over by a less-gullible competitor.

Chipmunks don’t share burrows or food supplies, which they’ll cache in underground chambers for winter. Through the warm months, these omnivores nosh on buds, tubers, mushrooms, worms, snails, bugs and—much to the dismay of gardeners and bird lovers—berries, bulbs and occasionally the eggs and hatchlings of ground-nesting birds.

The skittish rodents use bushes, rocks, fallen trees, fences and woodpiles as cover when foraging. Their most important refuges, though, are their burrows—elaborate excavations that typically extend from 18 to 36 inches below the surface and can reach more than 30 feet in length.

Their eclectic diets and energetic digging make chipmunks valuable ecosystem players: They disperse seeds, aerate soils and distribute microorganisms that deliver nutrients to tree roots. Many gardeners enjoy their antics and install feeders to attract them, while others consider the striped visitors as mulch-scattering, seed-stealing, bulb-munching pests. (For tips on minimizing such annoyances, see the end of this article.)

Regardless of species or location, all chipmunks must prepare to survive winter food scarcity. As autumn nears, they gather acorns, nuts and seeds, which are rich in calories and nutrients and tend to store well. They bustle to their burrows, cheeks bulging with chow—and those cheeks are a hoarder’s dream come true. In his book Winter World, New England ecologist Bernd Heinrich reports counting 60 sunflower seeds packed into just one cheek pouch. In a good year, one 4-ounce chipmunk can stockpile 8 pounds of food. 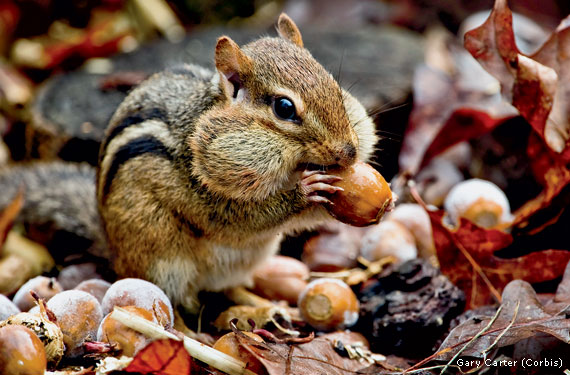 In late fall, chipmunks retreat underground, not to emerge for months. Nearly all spend at least part of the winter in a state called torpor. It’s a kind of intermittent hibernation in which temperature, heart rate, breathing and even brain activity drop dramatically. Torpor cuts energy needs by 75 percent, making food stores last longer. It can be risky, though: A predator can enter the burrow and kill a torpid chipmunk before it can rouse itself to fight or flee.

University of Manitoba researcher Daniel Munro reports that foods rich in fatty acids—such as the sunflower seeds found in many bird feeders—can dramatically reduce the time chipmunks need to spend in torpor. Females tend to remain in torpor longer than males do because their stockpiles must sustain them not just through winter but through the spring demands of mating, pregnancy and nursing, which they often face before snows melt and fresh forage returns to the woods.

Despite the challenges of life as tiny prey, chipmunks are determined survivors, and we ought not let familiarity breed contempt. Couchoux agrees. She hopes that her research will help inspire people to “see chipmunks differently,” she says, “not just as cute little critters, but as complex animals that deserve our attention.” 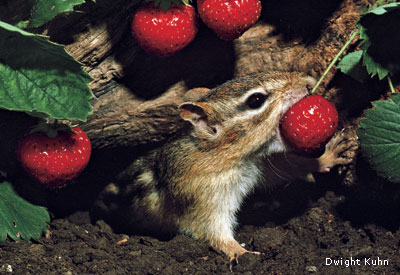 Chipmunks can be adorable marauders that munch garden bulbs and berries (left), raid bird feeders and dig tunnels, damaging lawns and pathways. Here are a few tips to protect your garden:

Prevent temptation: Install bird feeders on hard-to-climb metal or PVC pipe and clean up tempting spilled seeds. Amidst your native plants, you might put in a few exotics that chipmunks find unappetizing such as daffodil, grape hyacinth and fritillaria.

Scare tactics: Noisy wind chimes or fluttering garden flags may frighten away chipmunks, which are easily spooked by sound and motion.

Nontoxic repellent: Steep a few crushed garlic cloves and chopped chili pepper in hot water, strain the brew into a spray bottle, add a few drops of dish soap and vegetable oil, shake and apply to plants. Chipmunks (and other rodents) will steer clear.

Relocation? Some gardeners use traps to capture chipmunks for release miles away. But chipmunk survival depends on proximity to familiar dens. If the animals are moved in the fall with little time to establish new burrows and build up food stores, they will starve. So let them stay—and enjoy the show.

Writer Lynne Warren met her first chipmunk across a pile of sunflower seeds on the back porch of her childhood home in Maryland.