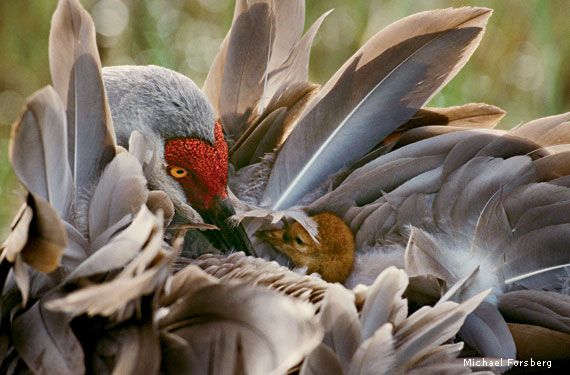 ON A BLUSTERY EARLY SPRING DAY on a lake in central Florida, a cold burst of wind suddenly lifts the feathers of a nesting sandhill crane to reveal her one-day-old chick, nestled in the warmth of its mother’s down.

This poignant portrait is a favorite frame of conservation photographer Michael Forsberg, who spent five years documenting sandhill cranes from suburban Florida to remote Arctic climes. “This image shows a really intimate connection,” he says, a bond that’s all the more touching because of the odds: Sandhill cranes bear only one or two young, and in urbanized central Florida, chances of survival for chicks are slim.

A Nebraskan, Forsberg has often photographed the annual mass migration of sandhill cranes to Nebraska’s Platte River, where the abundant birds “appear to fall like leaves” in the distance. Florida’s resident cranes are far more rare but no less vital as ambassadors that can inspire conservation of wetlands and grasslands, important bird habitats now under siege from human encroachment.