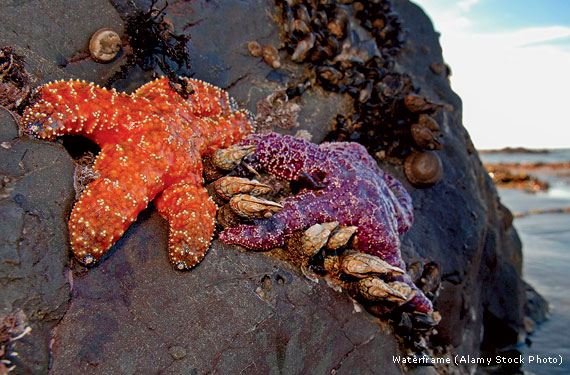 Ochre (above), sunflower and bat sea stars (below, left to right) are just three of the 20 species that wasting disease has ravaged along the Pacific Coast since 2013.

THE TROUBLE BEGAN when the starfish’s arm curled at the tip, crossed over another arm and twisted like a pretzel. Within days, a white lesion appeared. Soon, the affected arm detached and fell to the California seafloor. Finally, the sickly starfish lost its powerful grip, toppling end over end to the bottom. Its flesh melted away, leaving a skeleton smothered in a gooey white mat of bacteria.

Since 2013, this gruesome, reoccurring spectacle has pained and puzzled scientists chronicling the outbreak of “wasting disease,” which has claimed sea stars by the millions along the West Coast from Alaska to Mexico’s Baja California. It has infected at least 20 sea star species, wiping out more than 90 percent of some U.S. Pacific Coast populations. “It is awful watching their arms rip off,” says Drew Harvell, a Cornell University professor of ecology and evolutionary biology who has been studying diseased sea stars in the San Juan Islands off Washington state. “We had quite a few in our tank and watched them die.”

Scientists have been wrestling with what triggers the plague that is “melting” sea stars, questioning, for example, whether pollution or more-acidic oceans are weakening the animals’ resistance. In 2014, Cornell microbiologist Ian Hewson, working with Harvell and other scientists, isolated a virus they suspect is playing a role in the epidemic. And this February, Morgan Eisenlord, a Ph.D. student in Harvell’s lab, and other colleagues published persuasive evidence in Philosophical Transactions of the Royal Society B that sea stars got sicker and died faster in warmer ocean temperatures along the West Coast in 2014. “The warmer water made the epidemic much more widespread and catastrophic,” Harvell says.

As sea stars continue to die, researchers have begun to look for what ecological upheaval could result in their absence, a phenomenon that Harvell calls “the experiment of the century for marine ecologists.”

Sea stars—with arm spans ranging from a few inches to more than a yard—are also known as starfish, although they are not fish but invertebrates. As key predators on the Pacific Coast’s rocky reefs, they consume barnacles and various shelled sea creatures such as mussels. They play an outsized role in maintaining a diversity of marine life that delights tide-pool enthusiasts with colorful arrays of sea anemones, limpets, sponges, snails, barnacles and algae.

The late Robert Paine, a pioneering ecologist formerly at the University of Washington, called sea stars a “keystone species”—a name reflecting the center stone that keeps an arch from tumbling down. He based this name on his decades-long experiments of prying ochre sea stars off rocks along the northwest coast of Washington state and hurling them in deep water to see what would happen when this top predator was removed. Soon barnacles and then a monoculture of black mussels took over the reef where he had intervened.

The recent die-off of sea stars seems like a malevolent hand that has taken Paine’s experiment and expanded it up and down the coast. The scale of the epidemic is akin to other marine plagues, such as when nearly all long-spine sea urchins in the Caribbean abruptly died in 1983. The disappearance of 97 percent of these urchins had a cascading impact on coral reefs. Already stressed from overfishing of other grazers and fertilizer running off land, the reefs died, smothered by dense seaweed. 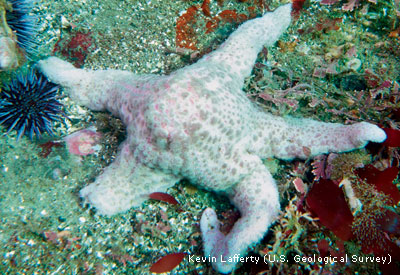 A short-spined sea star (left) was one of the millions that have suffered from the deadly disease that contorts, shrivels and amputates limbs before killing its victims.

Although sea star wasting disease has turned the usual galaxy of stars around Paine’s former study area into a barren void, divers have spotted some young recruits trying to stage a comeback. Many get to be about palm size but then succumb to the disease and dissolve. The long-term impact on rocky reefs will depend on whether starfish populations can rebound. Survivors may provide some answers.

I found one!” said Avrey Parsons-Field, a research associate at the University of California–Santa Barbara (UCSB). In 2015, about 900 miles south of Paine’s study site, Parsons-Field and then lab technician Evan Barba were clambering around rocks exposed at low tide. They shined powerful flashlights into dark crevices to locate young survivors tucked amid the mussels, limpets and anemones. They also photographed and measured the sea stars and took samples of their tissue for DNA analysis.

Carol Blanchette, a UCSB research biologist, hopes such genetic analysis might shed light on why a few animals have survived when so many of their cousins have disintegrated. When Blanchette and her team tracked the epidemic as it spread down the coast in early 2014, they didn’t think about temperature as a contributing factor until satellite imagery revealed that it was one of the warmest winters in decades. Warm sunny days also coincided with low tides, baking exposed reefs and shallow waters.

Earlier this year, Oregon saw a rebound in juveniles, but wasting disease continued in the Pacific Northwest and moved with El Niño–warmed waters as far north as Sitka, Alaska. Harvell is heartsick at how rare it is to find the once-abundant sunflower sea stars in the waters around the San Juan Islands off Washington. It leaves her with sadness about the future: “This is the kind of event we’re going to see more often under warming conditions.” 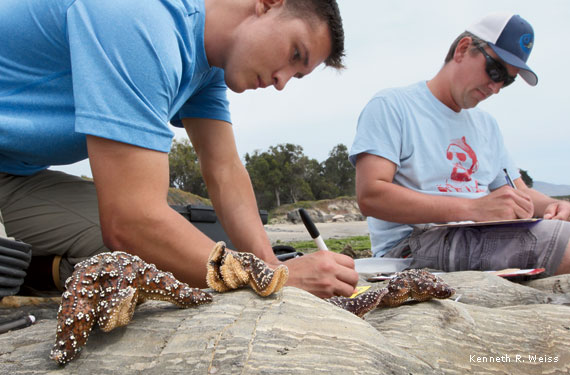