From flies to bats to lizards, our special summer photo gallery captures the diversity of animals that pollinate the world’s plants 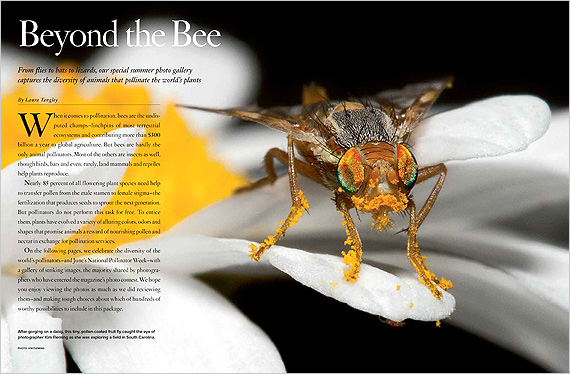 WHEN IT COMES TO POLLINATION, bees are the undisputed champs—linchpins of most terrestrial ecosystems and contributing more than $300 billion a year to global agriculture. But bees are hardly the only animal pollinators. Most of the others are insects as well, though birds, bats and even, rarely, land mammals and reptiles help plants reproduce.

Nearly 85 percent of all flowering plant species need help to transfer pollen from the male stamen to female stigma—the fertilization that produces seeds to sprout the next generation. But pollinators do not perform this task for free. To entice them, plants have evolved a variety of alluring colors, odors and shapes that promise animals a reward of nourishing pollen and nectar in exchange for pollination services.

What follows is a celebration of the diversity of the world’s pollinators—and June’s National Pollinator Week—with a gallery of striking images, the majority shared by photographers who have entered the magazine’s photo contest. We hope you enjoy viewing the photos as much as we did reviewing them—and making tough choices about which of hundreds of worthy possibilities to include in this package. 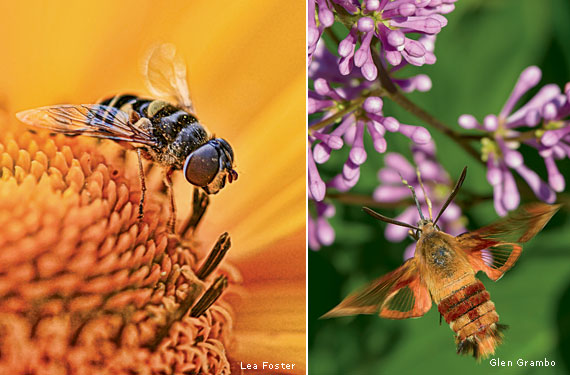 Moths. Hovering above a lilac blossom, this aptly named hummingbird moth (right) is using its long tongue to drink nectar that shorter-tongued insects cannot reach. Like butterflies, adult moths feed almost exclusively on nectar. Glen Grambo photographed this one in his Saskatchewan backyard. 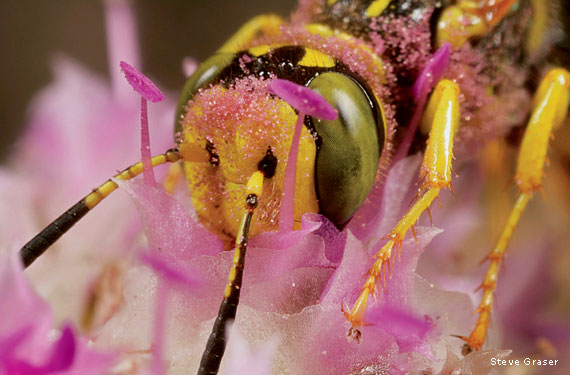 Wasps. Pretty in pink (pollen), a type of wasp known as the bee wolf visits a native pussy paws bloom near Lake Tahoe in California. True to its name, this solitary wasp does indeed hunt bees, which it delivers to its carnivorous larvae that hatch from eggs and mature in underground tunnels. Adult wasps feed on nectar, as reflected in the genus’s scientific name: Philanthus, from the Greek phil (“lover”) and anthus (“flower”). “When an insect like the bee wolf is focused on feeding, it makes it easier to get close,” says photographer Steve Graser. “For this picture, the end of my lens was approximately 2 inches from the little guy. I had to move quickly to get in position before the insect left, and slowly enough to not scare it away. It was a very fun challenge.” 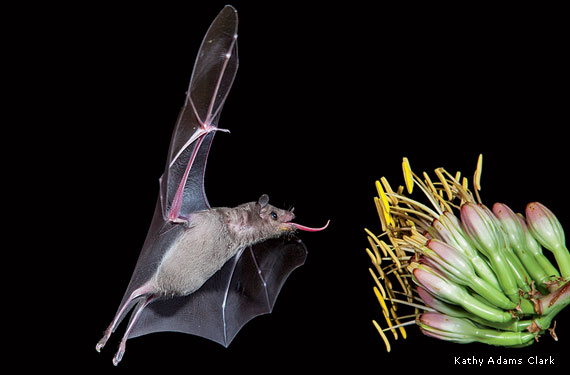 Bats. An agave bloom near a hummingbird feeder attracts a lesser long-nosed bat that zooms in for a slurp of nectar at a ranch in southern Arizona. In late August and early September, these hungry bats migrate through the region on their way south to Mexican wintering grounds. “By the end of the night, the animals are totally covered in pollen,” says photographer Kathy Adams Clark. “It’s amazing.” Important pollinators of agave as well as saguaro and organ pipe cactus, lesser long-nosed bats are listed as endangered by the U.S. Fish and Wildlife Service. 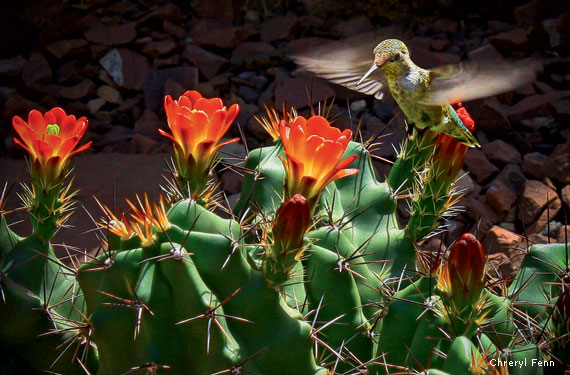 Birds. On a spring day with the Arizona desert “in full bloom,” Cheryl Fenn was focusing on a stunning Mojave mound cactus when this Costa’s hummingbird unexpectedly flew into her frame. The cactus and many other plants rely on hummingbird pollinators, particularly in deserts and the Tropics. Like this bird, which Fenn said “moved quickly from flower to flower,” hummers make good pollinators because they must eat a lot to sustain high metabolic rates. A single hummingbird may visit dozens or even hundreds of flowers a day. 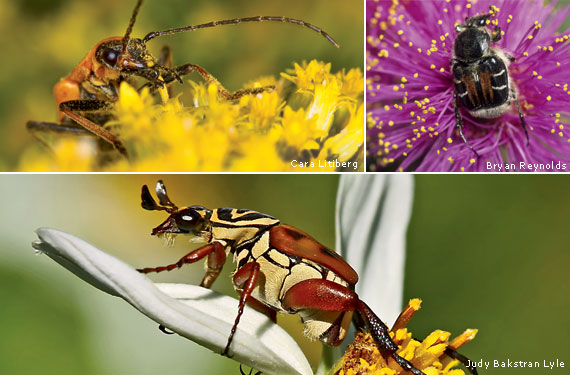 Beetles. A soldier beetle, flower chafer and delta flower beetle (clockwise from top left) reflect the staggering diversity of this group of animals—the most abundant insects on Earth, with more than 350,000 species described so far by scientists. Long before bees came along, beetles were among the first insects to visit flowering plants some 200 million years ago, and they still comprise the largest number of animal pollinators. They are hardly the most efficient, however. Eating and defecating their way through a flower—often spilling more pollen than they carry to the next one—beetles are known as “mess-and-soil pollinators.” 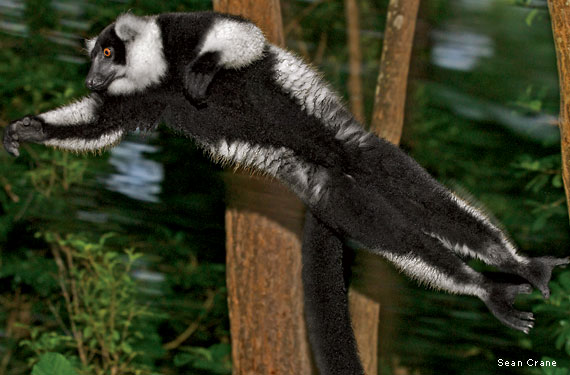 Lemurs. With the agility of a trapeze artist, a black-and-white ruffed lemur sails through the treetops in Madagascar. “I was using a flash mixed with ambient light to capture the action, hoping to convey a sense of movement,” says photographer Sean Crane. Found in the wild only in Madagascar, the rare primates feed on 40-foot-high flowers of the traveler’s tree, picking up pollen on their muzzles and ferrying it to other flowers. 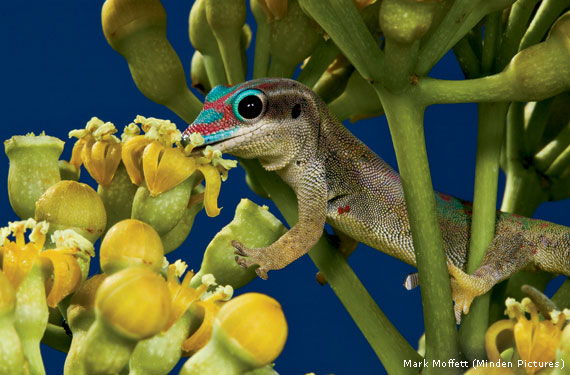 Lizards. On the island of Mauritius, an ornate day gecko licks pollen from a bois boeuf bloom. Rare pollinators, lizards perform this service on islands lacking other pollinator species. To photograph this one, Mark Moffett stood “absolutely still on the upper step of a ladder in 100-degree heat for two days until the geckos acclimated to my presence.”

For more than 40 years, the National Wildlife Federation has encouraged homeowners, schools, communities and others to create habitat for pollinators through its Garden for Wildlife™ program. In 2015, the Federation intensified these efforts, joining with dozens of other organizations to launch a nationwide campaign: the Million Pollinator Garden Challenge. Campaign participants are rallying hundreds of thousands of people across the nation to create 1 million pollinator gardens by the end of this year. To learn more or sign up, visit www.nwf.org/nwfgarden.

Being There for Bees
Gardening for Pollinators
Create a Haven for Hummingbirds
Roadside Habitats for Pollinators and Other Wildlife
NWF Blog: If It Weren't for Pollinators...
Six Fast Facts about Pollinating Bats
NWF Naturalist David Mizejewski introduces a black-and-white ruffed lemur
Family Fun: Create a Pollination Station in Your Yard or Make a Hummingbird Feeder