Roadsides can provide vital sanctuaries for pollinators and other wildlife 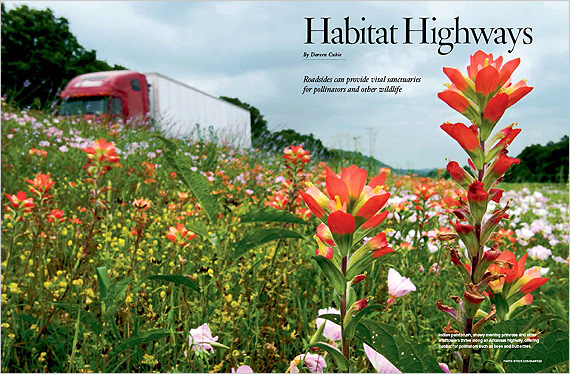 STARTING JUST A STONE'S THROW from the shores of Lake Superior, Interstate 35 heads south for more than 1,500 miles through fields of corn and soybeans and the remnants of midwestern prairie until it reaches the Texas chaparral country hard by the Rio Grande. Author Larry McMurtry, in his book Roads, called it “the long and lonesome 35.” But to biologists like Michael Gale, a special assistant to the U.S. Fish and Wildlife Service, this interstate could one day become “the monarch highway.”

“It overlaps perfectly with the central flyway of migrating eastern monarchs,” says Gale, a participant in a multi-agency federal plan to increase numbers of this beloved but beleaguered butterfly. During the past two decades, the population of overwintering monarchs in Mexico—where the majority of the continent’s monarch butterflies spend the cold months—has plummeted by as much as 90 percent, primarily as a result of habitat loss in the United States.

An interstate highway may seem an unlikely place to create butterfly habitat. But across the country, roadside rights-of-way are attracting the attention of biologists and conservationists, not just for their potential to help monarchs but other wildlife as well. Roadsides can support a surprising variety of pollinators, including bees, butterflies, moths, flies and other insects. Long-distance migratory birds such as the ruby-throated hummingbird can use roadside habitats as pit stops for resting and feeding. Scientists even have found small mammals thriving on the edges of highways.

In the past, U.S. roadsides have been anything but wildlife friendly—planted with exotic grasses like fescue, excessively mowed and heavily sprayed with herbicides. In recent years, however, several state transportation departments—including those in Iowa, Indiana, Florida and Nebraska—have begun changing their right-of-way management practices. Thanks to new developments at the federal level, such changes are likely to spread. Last December, for example, President Barack Obama signed the “Fixing America’s Surface Transportation Act,” which, among many measures, encourages states to plant milkweed and other native plants for pollinators along roadways. And recently, the Federal Highway Administration (FHA) released new “best management practices” that provide guidance to states and other transportation authorities about how to develop wildlife habitat along rights-of-way. 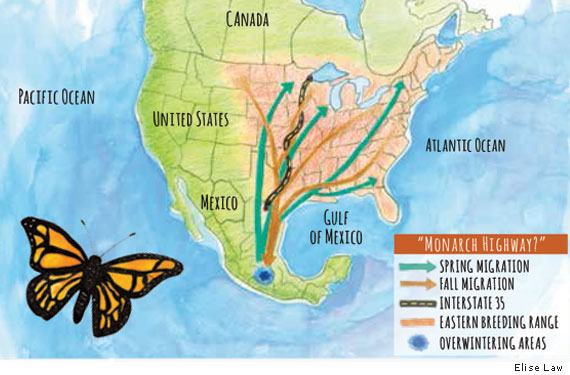 Insect pollinators such as bees and butterflies may benefit particularly from roadside sanctuaries. “We know pollinator habitat has declined drastically in the past decade, and we need to do all we can to replace it,” says Mary Phillips, director of the National Wildlife Federation’s Garden for Wildlife™ program, which works with homeowners, schools, churches and communities across the country to create new pollinator habitat, including along roadsides.

Lincoln Brower, a research professor at Virginia’s Sweet Briar College who has studied monarch butterflies for several decades, agrees. He points out that in the past, monarchs in the Midwest, where most of the continent’s monarch butterflies hatch, could lay eggs on milkweeds—the species’ only host plants—growing in or alongside farm fields. But the practices of modern agriculture, particularly widespread use of herbicide-resistant corn and soybeans, has led to vast swaths of land planted in crop monocultures sprayed with chemicals that kill both milkweeds and nectar plants. “It’s a disaster for pollinators,” Brower says.

Roadsides offer a significant amount of potential new habitat. According to Jennifer Hopwood, senior pollinator conservation specialist for the Xerces Society for Invertebrate Conservation and lead author of the new FHA guidelines, “there are at least 17 million acres of roadsides in the United States”—an area larger than the acreage of Massachusetts, Vermont and New Hampshire combined.

In some cases, all that’s needed to turn roadsides into wildlife havens are slight tweaks to management practices. The Florida Department of Transportation (FDOT), for example—responsible for some 186,000 roadside acres—is reducing mowing by 10 percent, thereby enhancing pollinator habitat. Jeff Caster, FDOT’s landscape architect, looks especially for places where native flowers grow naturally. He and his colleagues have identified several such locations in two counties along Interstate 10 between Tallahassee and Pensacola. There, roadside crews now mow wide rights-of-way just 5 feet up the adjacent slopes, leaving the remaining 10 to 30 feet to grow freely from spring into fall. “Pollinators are abundant in these areas,” especially buckeye butterflies, says Eleanor Dietrich, the Florida Wildflower Foundation’s FDOT-Panhandle Wildflower Alliance liaison. In late autumn, after the last of the flowers have set seed, FDOT mows everything down, which keeps woody plants from taking over.

Carefully timed mowing can benefit other wildlife as well. Minnesota’s Roadsides for Wildlife program encourages roadside managers to delay mowing their rights-of-way, especially ditch bottoms and back slopes, until August 1. “We ask them to leave a little grass for wildlife,” says Greg Hoch, a biologist with the Minnesota Department of Natural Resources. This gives many species of ground-nesting birds—including meadowlarks, vesper and grasshopper sparrows, ring-necked pheasants, upland sandpipers, bobolinks, killdeer and even several duck species—a chance to lay their eggs and raise their young. In western Illinois, researchers have discovered that taller and thicker roadside vegetation—the result of less mowing—boosts the number and diversity of prairie voles, western harvest mice, northern short-tailed shrews and other small mammals. 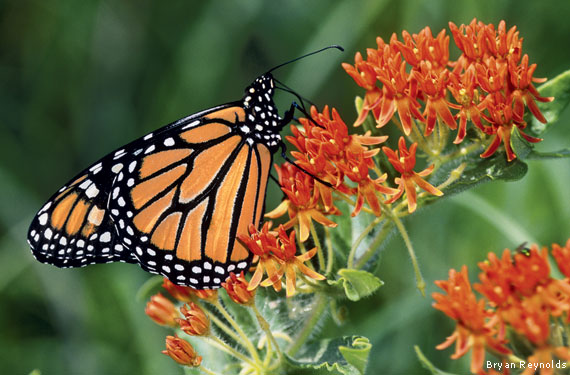 Beyond reducing mowing, planting native flowers, grasses and sedges along roadsides also benefits wildlife. The state of Iowa is at the forefront of reintroducing such natives to its rights-of way, with more than 50,000 roadside acres now covered with stiff goldenrod, narrow-leaved purple coneflower, wild bergamot and many other prairie-plant species.

Once Iowa’s state and county roads were blanketed with exotics that were sprayed heavily with herbicides. But in the late 1980s, when state legislators became worried about possible contamination of ground and surface water, they passed a law introducing a system called integrated roadside vegetation management (IRVM). Under IRVM, rights-of-way are seeded with natives, and unwanted plants are kept under control with spot mowing, prescribed burns and the judicious use of herbicides.

“Roadside managers plant many flowers that are attractive to pollinators, including two types of milkweed,” says Kristine Nemec, IRVM program manager for the University of Northern Iowa’s Tallgrass Prairie Center. The result: linear refuges for monarchs and other pollinators along the state’s rights-of-way.

The city of Dublin, Ohio, an NWF-certified Community Wildlife Habitat™, does something similar on a smaller scale. “We have miles and miles of pollinator plantings within the city, along state routes and on neighborhood roads,” says Barbara Ray, nature education coordinator for Dublin, where common, swamp and redring milkweed mingle with native grasses such as big and little bluestem and prairie dropseed. One of Dublin’s more recent projects is transforming the cloverleaf interchange at Interstate 270/U.S. 33 into a sweeping wildlife meadow. “To the public, this likely appears mostly as aesthetic appeal,” says Ray, who adds that as she and other habitat team members educate more community residents, they hope to generate awareness of the conservation significance of rights-of-way.

Changing the way roadsides are managed can help people as well as wildlife. For one thing, it’s cheaper to mow less and spray fewer chemicals. A recent University of Florida study found other benefits, including reduced pollution runoff, improved air quality, greater resistance to invasive species and more carbon storage. Yet roadside managers agree that mowing cannot be completely eliminated. “Human safety comes first,” says Minnesota’s Hoch. Under his state’s program, rights-of-way are mowed 8 feet back from the edge to provide visibility for drivers.

What about the safety of wildlife? “We’ve all hit butterflies when we’re driving,” Hopwood says, “but if we give butterflies quality habitat, they may be less likely to leave roadsides and be killed by cars.” Indeed, several studies in the United States and Europe found that more butterflies are killed on rights-of-way with grass than on those bordered by native vegetation.

“We believe the benefits will exceed the cost,” says Brower. One thing is absolutely certain, he adds: "Monarchs and other pollinators desperately need our help, and roadside habitats must be part of the solution." 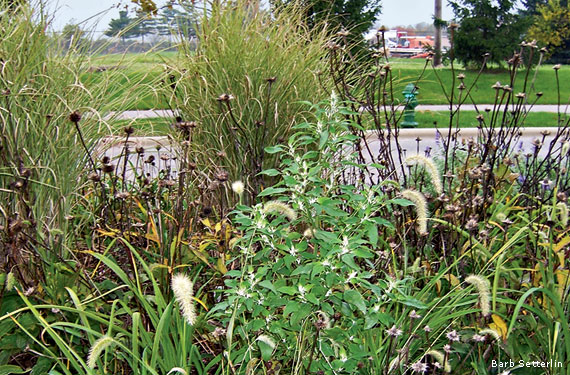 Little bluestem, purple coneflower and other native plants provide pollinator habitat along Emerald Parkway (above) in Dublin, Ohio, a National Wildlife Federation-certified Community Wildlife Habitat™ that is restoring rights-of-way throughout the city. Dublin is among dozens of NWF community habitats and state affiliates—including those in Indiana, Missouri, Nebraska and Arkansas—working to make roadsides wildlife friendly. Recently, six power-line rights-of-way in Maryland became NWF-certified habitats after Baltimore Gas and Electric allowed native plants to thrive beneath them. And across the country, participants in the Federation’s Mayors’ Monarch Pledge are turning roadsides into habitat for butterflies and other pollinators.

At the federal level, NWF last December helped organize a White House summit hosted by its Office of Science and Technology Policy. Attended by federal and state transportation officials as well as monarch butterfly experts, the summit’s goal was to encourage federal, state and private roadside managers to create pollinator habitat along roadside rights-of-way nationwide.