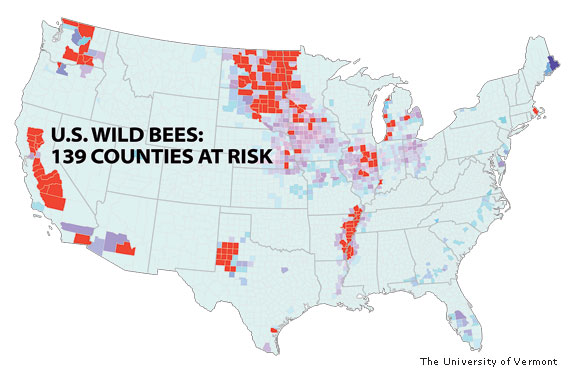 The first study to map distribution of native bees in the continental United States suggests that the pollinators are disappearing in the country’s most important crop-producing regions.

A team of scientists from four U.S. universities created distribution maps using information from federal databases, input from bee experts and field observations. The study identifies 139 counties in key agricultural areas that appear to have serious mismatches between declining wild bee populations and increasing demands for crop pollination, including in California’s Central Valley, the Midwest corn belt and the Mississippi River Valley. (Red on the map above shows areas of highest bee declines.) Writing in Proceedings of the National Academy of Sciences, the team notes that wild bee numbers in the lower 48 states fell by 23 percent between 2008 and 2013. Habitat loss, pesticides and climate change are contributing to the declines. “The good news about bees is that now we know where to focus conservation efforts,” University of Vermont ecologist Taylor Ricketts says. Some 4,000 native bee species occur in the United States. 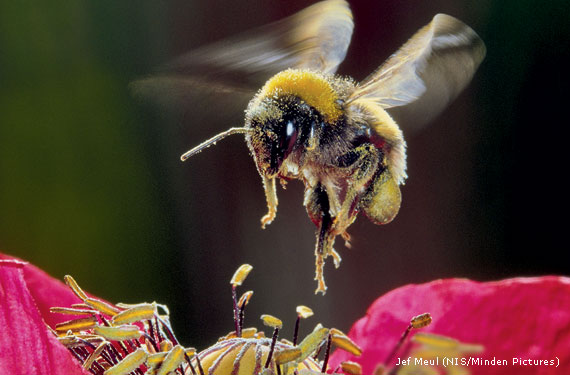 British researchers have discovered how bumblebees use their sharp sense of smell to improve their foraging skills. “They secrete a substance whenever they touch their feet to a surface, much like us leaving fingerprints on whatever we touch,” says University of Bristol biologist Richard Pearce. These so-called scent marks, he observes, enable the insects to determine whether they or other bumblebees have visited a specific flower.

Based on a series of laboratory tests of buff-tailed bumblebees (Bombus terrestris, above), the study is the first to demonstrate that the pollinators can distinguish between their own scents, the scents of their nest mates and the odors of bees of the same species from other colonies. Using such scent marks, the researchers explain in Scientific Reports, bumblebees can improve their success at finding good food sources and avoiding flowers that already have been mined of nutrients by other bees. 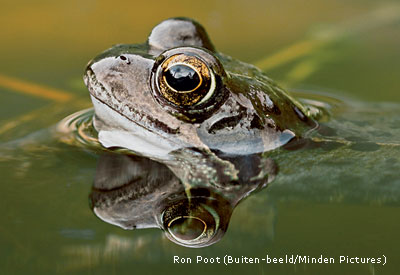 According to an investigation by European scientists, toads and frogs (such as the common frog, right) have exceptional night vision that may exceed that of all other animals. Through a series of experiments, the researchers confirmed that the amphibians have unique rods, or photoreceptor cells, in their retinas not found in any other vertebrates. These rods enable the creatures to see color in conditions so dark that humans would not see anything at all. “It’s amazing that these animals can actually see color in extreme darkness, down to the absolute threshold of the visual system,” reports Almut Kelber, a sensory biologist at Lund University in Sweden. Noting that these results were unexpected, the investigators speculate in Philosophical Transactions of the Royal Society B that such superior color vision may have evolved to enable frogs and toads to find their way in dens and other dark habitats. 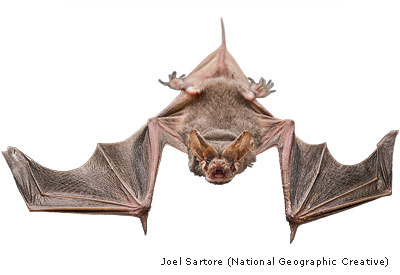 Until now, most experts believed that birds from the swift family held the world speed record for horizontal flight. The common swift, for example, can fly as fast as 60 miles per hour. But recent research by a group of international scientists has crowned a new champion: the Brazilian free-tailed bat (left). Using tiny radio transmitters temporarily attached to several of the bats and a mobile receiver installed on a small airplane, the group tracked the bats’ movements and discovered that the animals can achieve horizontal speeds approaching 100 miles per hour. “Initially, we could hardly believe our data, but they were correct,” says University of Tennessee bat expert Gary McCracken. Reporting in Royal Society Open Science, the researchers say their measurements indicate that tail winds did not assist the bats, which weigh about 12 grams each. The results, they add, demonstrate that bat flight performance long has been underappreciated. 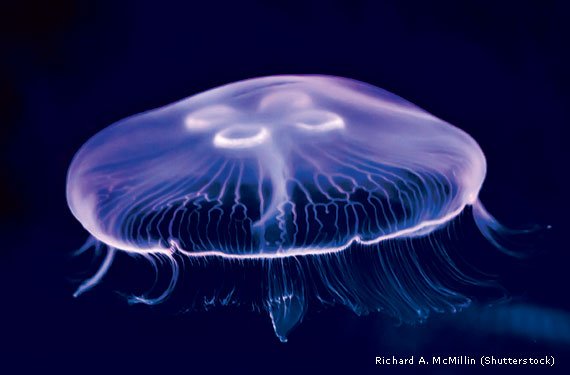 Lighting Up the Depths

A landmark survey of marine life in California’s Monterey Bay finds that three quarters of the creatures living between the surface and a depth of 13,000 feet can generate their own light through bioluminescence. Biologists at the Monterey Bay Aquarium Research Institute (MBARI) studied video footage from 240 dives by remote-controlled submersibles. The footage revealed more than 350,000 glowing individual creatures larger than one centimeter in size. The researchers also used a database of scientific identifications to determine the species of each animal. The pitch-black waters of the deep sea, they observe in Scientific Reports, is by volume the largest habitat on Earth. “I’m not sure people realize how common bioluminescence is,” MBARI researcher Séverine Martini says.