Humpback whales in the North Atlantic need one tiny fish to survive. Will supplies last? 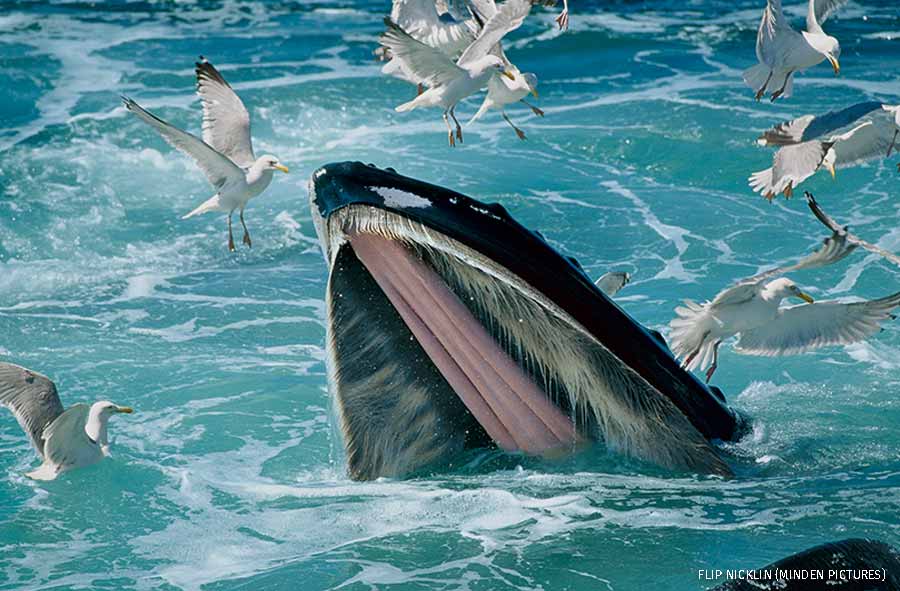 Humpbacks burst upward to gulp fish into their baleen-lined jaws as common gulls, kittiwakes and other seabirds partake in the feast.

IN JUNE OF LAST YEAR, during the long daylight hours of the summer solstice, a 50-foot research vessel named the Auk plied the waters of Stellwagen Bank National Marine Sanctuary some 20 miles off Cape Cod, Massachusetts, at the southern end of the Gulf of Maine. The sea roiled with humpback whales, their fins and tails breaking the surface on all sides of the ship.

Researchers onboard used long-handled poles to place suction-cup-mounted GPS tags on several whales as part of an ongoing study of their movements. Results to date show that humpbacks in the gulf follow the food, which is almost exclusively a 4-to-6-inch-long fish called sand lance. “If sand lance suddenly disappeared, humpbacks would be in big trouble,” says David Wiley, a cetacean biologist and research coordinator for the sanctuary.

Hoping to help prevent the loss of either species, Wiley joined a team of 55 scientists, natural resource managers and conservationists at a workshop last year to assess potential threats to sand lance. It’s a proactive approach that may save these linchpins of a marine ecosystem—and the humpbacks they sustain.

The whales need the help. A whaling ban in 1966 and decades of protection under the U.S. Endangered Species Act helped humpback whales climb back from near extinction. Delisted in 2016, the Gulf of Maine population now tops 800 animals. But that’s still a shadow of their former abundance, and dependence on sand lance leaves them vulnerable.

Atlantic humpback whales breed and give birth during winter in the Caribbean and Cape Verde Islands. They then migrate northward to summer feeding areas primarily off Scandinavia and New England. Because they eat nothing during the winter breeding season, they subsist on sand lance gulped down the previous summer, when one whale might eat a ton of the fish in a single day. 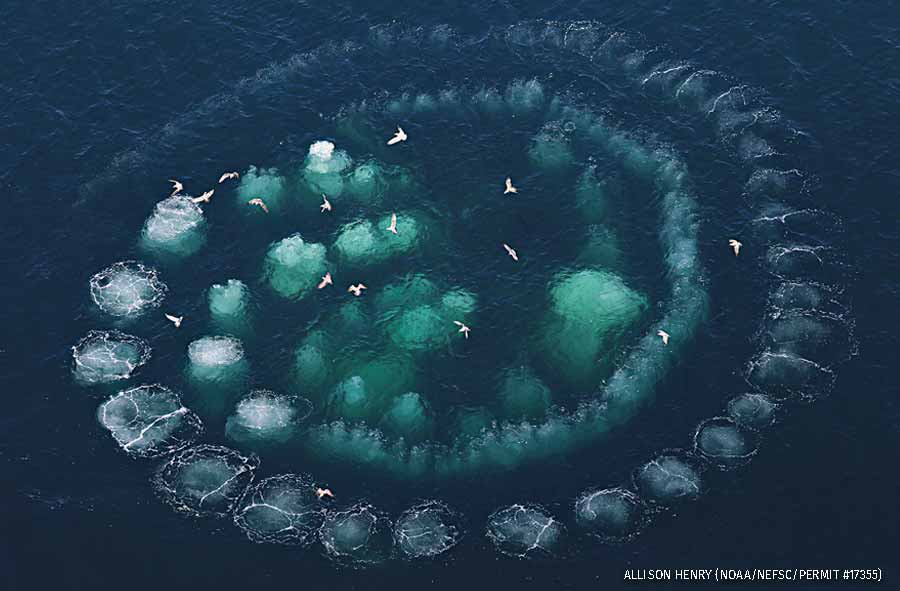 In Stellwagen Bank National Marine Sanctuary off the coast of Massachusetts, humpback whales below the surface blow a perfect spiral of bubbles that act as a net to corral sand lance, a tiny forage fish on which the whales feed.

To catch enough to tide them over the winter, humpbacks may work alone or in teams of up to 10, creating a cloud of froth called a bubble net. One or more whales dive down, then exhale underwater, releasing streams of bubbles, often while swimming in upward spirals called double loops. At the surface, the bubbles form a large ring that acts as a net, trapping countless sand lance. Whales then burst through the ring’s center, baleen-lined mouths open wide, straining the water for silvery fish.

“Other baleen whales feed by rapidly swimming forward, but humpbacks are adapted for the fine-scale movements that allow them to create bubble nets,” says Wiley. And although sand lance burrow into the sandy bottom at night, humpback whales dive to the sea floor, roll onto their sides, open their mouths and expand their throat pleats, capturing sand lance in the process.

Are there enough of the fish to sustain humpbacks? Scientists aren’t sure. “The fish are too small to be caught in population assessment trawls,” says Wiley, and because they hide in the sand at night, they’re “impossible to find with acoustics.”

This lack of population data is troubling. A 2008 paper in Ecological Applications noted that uncontrolled fishing for sand lance in the United Kingdom led to documented crashes of black-legged kittiwakes, a surface-feeding seabird. To protect the seabirds and whales that prey on sand lance, U.K. biologists now manage sand lance harvest levels based on predator numbers.

Though there’s currently no plan for commercial harvest of sand lance in the United States, “there’s also no protection,” says Wiley. “Their loss would cascade through the ecosystem, affecting species that depend on the fish as a food source: great shearwaters, Atlantic bluefin tuna, humpback whales.” Atlantic cod could also suffer, says Zack Cockrum, director of conservation partnerships at the National Wildlife Federation’s Northeast Regional Center in Vermont. “Studies show that as herring populations have declined in the Northeast, fish like cod have started consuming more sand lance”—which could be a problem for humpbacks. 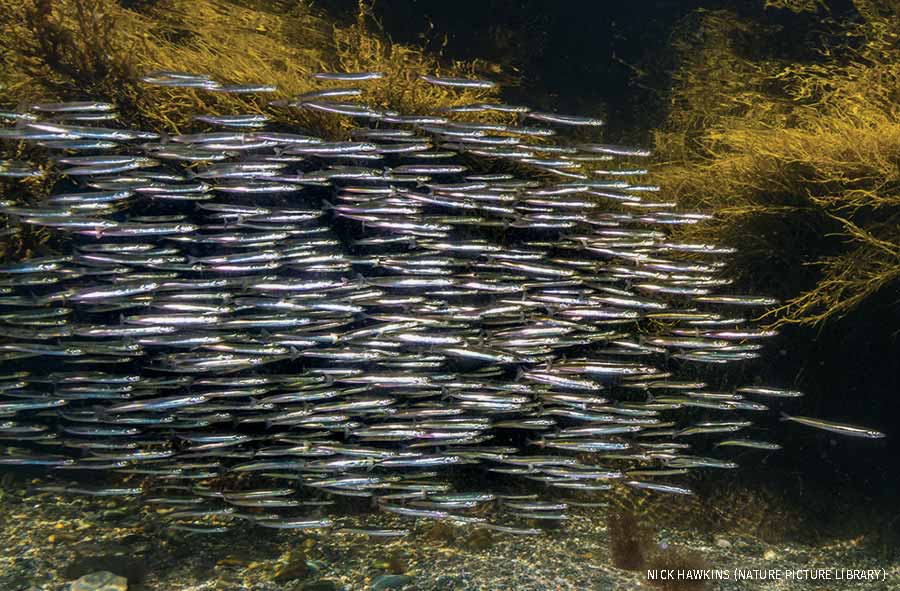 Like a mass of liquid silver, sand lance school off the coast of Nova Scotia, Canada, forming a tasty target for myriad species of fish, marine mammals and birds. Widespread in the North Atlantic, the fish burrow in sand at night.

Researchers have other concerns, including possible impacts on sand lance from offshore energy development, sand and gravel mining and climate change. Sand lance are sensitive to ocean acidification, caused by increasing carbon dioxide in the atmosphere. And the fish feast on copepods, tiny crustaceans that have begun shifting their range northward as the Gulf of Maine’s waters warm.

“When you tug on one thread of the food web, the whole thing can easily untangle,” says Cockrum. “That’s why we have to protect sand lance and other forage fish.” Wiley agrees. The future for the Gulf of Maine’s humpback whales, he says, “all comes down to a fish so small it’s a mere glint in the sunlight.”

Science and conservation writer Cheryl Lyn Dybas is based in Virginia.

Up from the Depths »
Atlantic Menhaden: A Feast for Whales »
Ensuring a Moveable Fish Feast »
We Must Care for the Oceans »
Amazing Species of the Atlantic Ocean »