How to Make Backyard Bats Feel at Home

Provide food, water and roosting sites to help these important but beleaguered mammals. 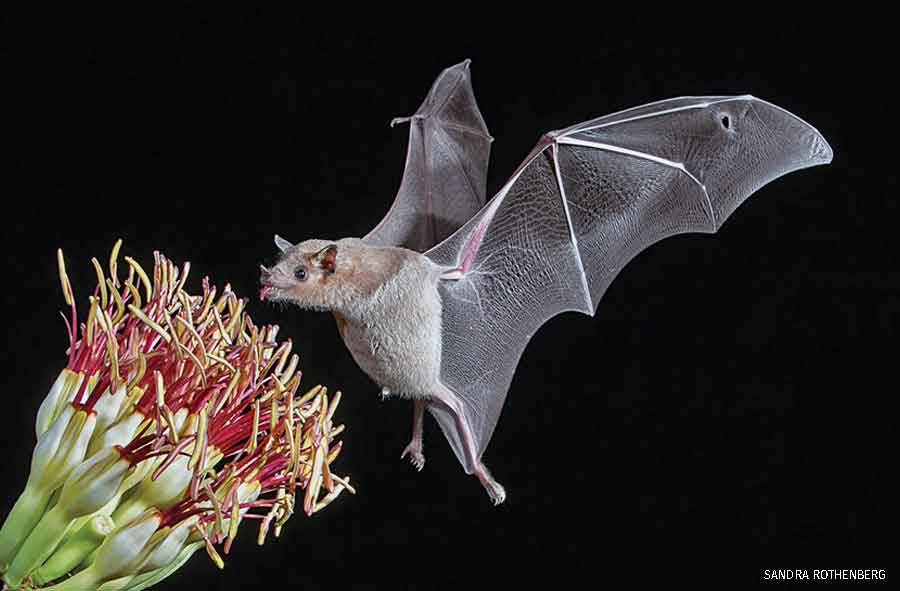 A lesser long-nosed bat drinks nectar from an agave flower near Tucson, Arizona.

ONE WARM, MUGGY AFTERNOON, we cranked open the patio umbrella and found inside four small brown bats hanging upside down, snoozing peacefully. Rudely awakened, the creatures loosened their grip, dropped down a foot or two and flew off as our human guests shrieked and beat a hasty retreat.

It was a typical reaction, given our culture’s aversion to bats, much in evidence on television shows about blood-sucking demons that abound at this time of year. But the truth is, bats are our friends—and they need our help.

Although three kinds of tropical bats do consume blood—almost entirely that of birds and cattle—most of the 47 bat species native to the United States and Canada feed on insects, including those that spread disease and decimate crops and other plants. A single little brown bat can devour from 300 to 3,000 insects a night. Three bat species—lesser long-nosed, Mexican long-tongued and greater long-nosed bats—migrate from winter homes in Mexico into Arizona, New Mexico and Texas during late spring and summer, feeding on and pollinating the blooms of agave and native cacti such as saguaro.

Eight native bats are on the federal endangered species list. Some species are declining sharply due to white-nose syndrome, an often fatal disease that since 2006 has spread from a few caves in the Northeast to 33 states and seven Canadian provinces, killing an estimated 5.7 to 6.7 million hibernating bats, says Catherine Hibbard of the U.S. Fish and Wildlife Service. According to Bat Conservation International (BCI), the other biggest threats are habitat destruction, including the loss of mature tree roosts; shrinking water resources in the West; and the rapid expansion of wind turbines, which are estimated to kill more than 200,000 bats annually. For these reasons, says BCI’s Fran Hutchins, “anything gardeners can do to create habitat for bats is helpful.”

Here are some specific actions you can take to help beleaguered bats:

• More than half of our native bats roost in tree cavities and the narrow, rough spaces between bark and wood. If a dead tree doesn’t pose a safety concern, leave it in your yard.

• The next best thing is to put up a bat house for roosting and rearing baby bats, called pups. Consult the BCI or National Wildlife Federation Garden for Wildlife™ websites for bat house designs and other tips.

• If you live in the Southwest, cultivate and protect the cacti needed by nectar-feeding bats.

• A pond or water feature for diurnal wildlife will nurture bats at night.

• Cat attacks are one of the most common causes of bat mortality, so keep your cats indoors.

Take these steps and you’ll benefit from bats’ pest-control and pollination services while enjoying views of their evening aerial displays.

Janet Marinelli wrote about wildlife hedgerows in the June–July 2018 issue.