Founded in 1936, the same year as the National Wildlife Federation, the Idaho Wildlife Federation (IWF) has grown to become a leading bipartisan voice advocating for wildlife and habitat conservation—and for the interests of sporting men and women across the state. 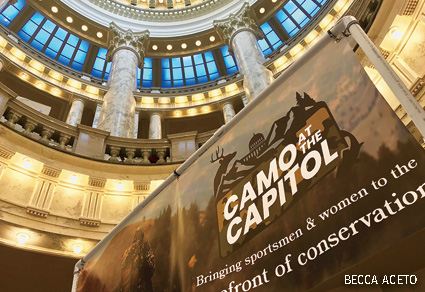 With more than 40,000 people in its affiliate network, IWF lobbies for state and federal policies that will ensure healthy wildlife and habitats for future generations. In February, for example, IWF leaders went to the State House in Boise (pictured) for an event called Camo at the Capitol, a lobbying day for wildlife advocates. There, IWF Executive Director Brian Brooks testified against a bill that would divert money from hunting and fishing licenses toward paying for damages to agricultural irrigation equipment. “That’s money that’s supposed to be used on habitat and wildlife, and it’s being directed into people’s pockets,” says Brooks. Though the bill passed, Brooks is proud that IWF fought for wildlife.

Protecting wildlife migration corridors is another key IWF goal. One of the longest mule deer migration routes runs 242 miles from Wyoming into Idaho, where the animals have a summer range. To protect this vital pathway, IWF has encouraged public and private landowners to remove fences, build wildlife crossings and take other steps to keep the route open. And because Idaho’s migratory salmon and steelhead are “winking out of existence,” says Brooks, IWF is studying the impacts of dam removal and lobbying for wise policy to protect these important sport fish.

Blessed with magnificent open spaces (such as the Boulder Range, top), IWF also works to keep public and private lands as accessible as possible for people to enjoy. Acknowledging the often tricky “political calculus” of land use law, Brooks is optimistic: “We’re leading people to advocate for wildlife.”

At its annual meeting in June, the National Wildlife Federation honored the following groups and individuals for advancing conservation:

Affiliate of the Year: The Arizona Wildlife Federation earns this top honor for work such as protecting the Grand Canyon and promoting sporting interests (see below).

Affiliate Volunteer of the Year: For more than 20 years, Mike McKernan has volunteered to work with kids at the South Dakota Wildlife Federation’s Youth Conservation Camp.

Conservation Leadership Award: Dan and Connie Burkhardt (above left) of the Conservation Federation of Missouri actively promote conservation through books, concerts and other public and private outreach.

Charlie Shaw Conservation Partnership Award, NWF Affiliate: Bob Rees of Oregon’s Association of Northwest Steelheaders is an avid fisherman who promotes the importance of diversity, equity and inclusion in the hunting and angling community. 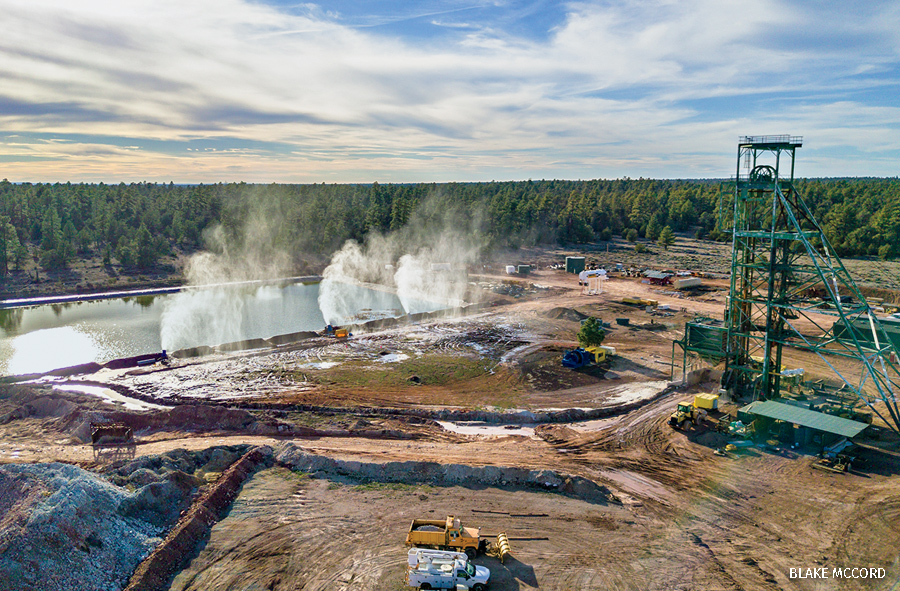 Fighting to protect the Grand Canyon—and a way of life

Founded in 1923, the Arizona Wildlife Federation (AWF) is the state’s oldest conservation organization—but its energy and impact have only increased with age. “Their strategic growth is providing strength and impact at a significant scale,” says Lew Carpenter, an NWF director of conservation partnerships. With a mission to “value, conserve, enhance, manage and protect wildlife and wildlife habitat,” AWF works with lawmakers, landowners and 15 affiliated sporting and conservation groups to promote goals such as protecting access to public lands, advancing clean water legislation, addressing impacts of climate change and supporting the state’s hunting and angling heritage.

As part of that effort, AWF offers the Becoming an Outdoors Woman program to teach women kayaking, archery and other outdoor activities. “It’s like a kid going to camp, but it’s targeted to adult women—and they serve wine,” says AWF’s Conservation Director Scott Garlid.

A top priority: AWF is fighting to stop uranium mining (such as at Canyon Mine, above), which threatens to taint soil and streams near the Grand Canyon and beyond. It also supports the Grand Canyon Centennial Protection Act, which would make a moratorium on uranium mining permanent. “We’re using science as the basis for an argument that resonates with people’s values,” says Garlid.

The Federation—with support from the U.S. Department of Defense—has prepared a guide to help DoD natural resource managers factor climate change into their planning and conservation efforts. Covering 25 million acres from seashores to deserts, DoD lands nurture many rare and endangered plant and animal species. Climate change is a problem for many of these species and also affects military training and testing. Rising sea levels and more-intense storms, for example, can damage beach habitat for nesting sea turtles and shorebirds and also may hamper amphibious landing practice. Likewise, tinder-dry forests not only stress forest dwelling creatures, but can constrain live-fire training due to wildfire risks. “The military is an important but underappreciated partner for the wildlife conservation community,” says guide coauthor and NWF Chief Scientist Bruce Stein. “DoD’s climate adaptation efforts will help maintain military readiness and benefit the species that share their lands.” Visit: www.nwf.org/DoDAdaptationGuide

NWF Naturalist David Mizejewski has released a new edition of his popular book Attracting Birds, Butterflies and Other Backyard Wildlife. With native plant lists and more than 200 color photos, the book teaches how to create a wildlife habitat garden. “Your yard or garden can be more than just beautiful,” says Mizejewski. “It can also help wildlife.” Visit: www.shopnwf.org 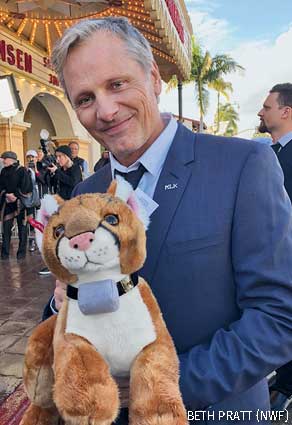 A STAR IS BORN FOR COUGAR CONSERVATION

Honors go to a plush toy of famous P-22

At a California film festival in February, actor Viggo Mortensen holds a plush toy replica of another California celebrity: cougar P-22, who lives in Los Angeles’ Griffith Park. The Public Lands Alliance gave its Innovative Product of the Year Award to this toy (complete with faux tracking collar), which teaches about the plight of urban cougars. Hemmed in by highways, they’re unable to safely travel to seek mates. Proceeds from sales of the toy will go to the #SaveLACougars campaign and its effort to build the world’s largest wildlife crossing to save these threatened cats. “We do not want this population to go extinct,” says NWF California Regional Executive Director Beth Pratt.