Hunters and anglers are switching to nonleaded ammunition and fishing tackle, a move that benefits wildlife, the environment and human health. 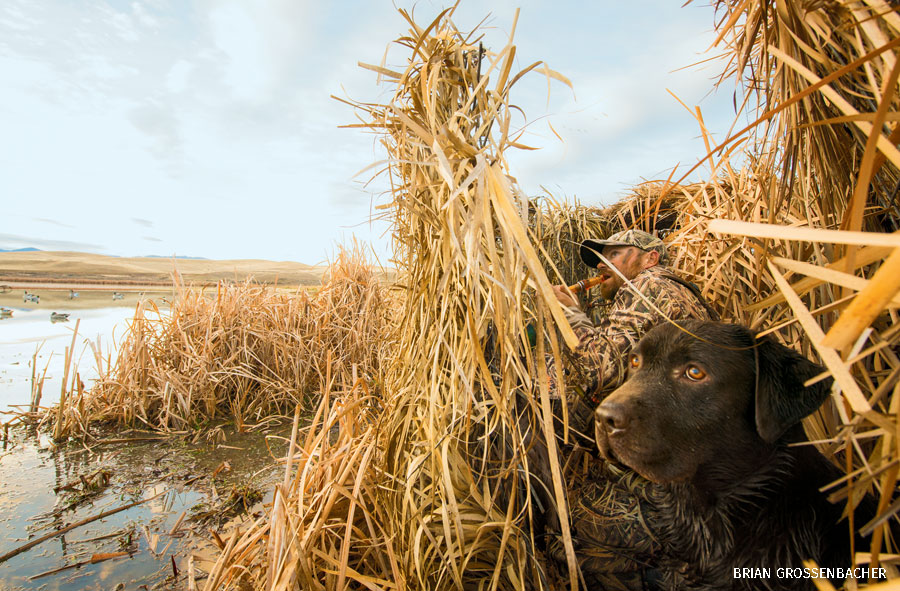 In a Montana duck blind, Dan “Rooster” Leavens and his dog, Willie, await their quarry. Waterfowl hunters are required to use nonlead shot to prevent poisoning wetlands, wildlife, even retrievers.

FROM A STAND OF MICHIGAN JACK PINE, a ruffed grouse flushes skyward. Marc Smith, Great Lakes director of conservation partnerships for the National Wildlife Federation, raises his shotgun and brings down the grouse with a load of steel shot. He then retrieves the bird to cook for dinner. “I stopped using lead shot years ago,” says Smith. “Using steel shot ensures that the game I hunt is safe to eat.”

Smith also wants to ensure that the fields, forests, wetlands and lakes where he hunts and fishes are safe—meaning free of lead ammunition and fishing tackle, which can poison land, water and the wildlife that depend on them.

A growing number of hunters and anglers likewise are switching to nontoxic hunting ammunition and fishing tackle to help wildlife and protect habitats. In fact, a 2013 study of dove hunters found that more than half would be willing to use nonlead shot if scientific evidence showed it would help wildlife. Today, that evidence is overwhelming.

Upland birds such as ruffed grouse can die after ingesting lead shot scattered on the land.

No safe levels of lead

As early as 1894, conservationist George Bird Grinnell raised the alarm about ducks, geese and swans dying from lead poisoning after ingesting lead shot. A powerful neurotoxin, lead damages tissues, organs and immune and reproductive systems, often causing paralysis and death. Waterfowl that ingest as few as one or two shot pellets can die in weeks, and studies document the deaths of raptors and scavengers that eat the carcasses or gut piles of game shot with lead. Worldwide, studies document more than 130 wildlife species that are negatively affected by lead.

In North America, pheasant, wild turkey, woodcock, mourning dove, bobwhite and ruffed grouse have all been reported with lead poisoning from ingesting lead shot likely mistaken for seed. The Missouri Department of Conservation estimates that 9 million to 15 million mourning doves die each year of lead poisoning, a toll as great or greater than the annual legal harvest by hunters. Lead can poison raptors such as bald eagles, hawks, owls and endangered California condors if they prey on lead-shot carrion or fish containing lead sinkers or jigs. Last August, a bald eagle was found in Michigan’s Upper Peninsula hanging upside down from a tree, emaciated and dehydrated, with a blood-lead level more than three times that likely to be fatal. And from 1991 to 2018, the University of Minnesota Raptor Center admitted 2,036 eagles; 70 percent of them tested positive for lead and more than 560 had lead toxicity requiring treatment. Many of those did not survive.

Fishing gear, including lead jigs and weights, is a significant source of lead poisoning for loons, which often ingest lead when eating fish that are trailing line and tackle after breaking free from anglers. Such poisoning can have population-level effects. A 2018 New Hampshire study, for example, estimated that lead poisoning over a 24-year period led to a 43 percent reduction in the state’s loon population. “An alarming number of loons die each year after ingesting lead fishing tackle,” says NWF senior wildlife biologist John Kanter. “The growth and recovery of this iconic species may be compromised if anglers don’t switch to nontoxic alternatives.”

Humans, too, can be exposed to lead by eating venison or game birds that contain lead shot or bullet fragments. A 2009 study in North Dakota tested ground venison from meat-processing plants and found that nearly 6 percent was contaminated with lead. And a study by the Centers for Disease Control and Prevention found elevated blood-lead levels in people who ate wild game. The findings prompted warnings that children and pregnant women should avoid game harvested with lead, which can cause brain damage, developmental defects, neuropathy, attention deficit disorder, even death. The impacts are most pronounced in children, whose brains are still developing—one reason why lead additives in paint and gasoline were banned long ago.

Bald eagles and other raptors that scavenge dead game or gut piles tainted with lead also fall victim to the powerful neurotoxin, as did this bald eagle in Maryland, which couldn’t be saved after ingesting lead.

The National Wildlife Federation has long been a leader in the effort to reduce lead in the environment. In 1985, it sued the U.S. Fish and Wildlife Service (FWS) to ban lead shot. The suit failed, but it helped prompt FWS in 1986 to begin a phased-in ban on lead shot for waterfowl hunting, which took full effect in 1991. Just nine years later, one study found a 64 percent drop in lead poisoning in waterfowl, which saved an estimated 1.4 million birds.

Several of the Federation’s 52 state and territorial affiliates also have taken steps to reduce lead. The Minnesota Conservation Federation, for example, recently passed a resolution supporting state agencies regulating lead when studies indicate population-level impacts on wildlife, and the New Mexico Wildlife Federation (NMWF) is now using only nonlead ammunition in its shooting-instruction programs. “This is consistent with the leave-no-trace ethic,” says NMWF Executive Director Jesse Deubel. “By choosing lead-free ammunition, our membership continues to be proper stewards of both the land and the wildlife it harbors.”

More than 30 states have adopted policies to steer hunters and anglers away from lead. Many require nontoxic shot for species such as rail, snipe and woodcock on certain state and federal lands, including wildlife management areas or national wildlife refuges. In South Dakota, target shooting with lead shot is prohibited in some areas, and Arizona offers incentives for hunters within the range of the California condor to use nonlead ammunition or to remove gut piles of field-dressed game, a voluntary program that has had an 88 percent compliance rate over 10 years.

California originally banned lead hunting ammunition within the range of the California condor but then expanded the ban, which became statewide in 2019. And in 2016, New Hampshire implemented a ban on the sale or use of lead sinkers or fishing weights weighing one ounce or less.

Hunters and anglers can choose to use nonlead alternatives no matter where they live as nontoxic alternatives are increasingly available in stores and online. Hunters can choose steel, bismuth and tungsten shot and copper bullets, which stay more intact than lead upon impact, leading to cleaner wild game meat. And anglers can readily find tin and tungsten fishing weights to replace lead sinkers, jig heads, bead heads, wire fly wrap and dumbell eyes.

An iconic game species, elk roam the National Elk Refuge near Jackson, Wyoming. When hunters use nontoxic bullets in pursuit of elk, deer and other game, they help ensure safer meat for humans and a healthier habitat for all wildlife.

Worth the price for wildlife

Nontoxic options are more expensive than lead products, but less so than might be assumed. At one major retailer, steel shot costs about 50 cents more per box for a comparable brand, but many hunters view that marginal cost as well worth the benefits to wildlife and habitats. And there’s mounting evidence that nontoxic options are as effective as lead. In 2015, the Wildlife Society Bulletin published a study showing no statistical difference in effectiveness of steel and lead shot for dove hunters. Wyoming hunter Chris Madsen sees the same with copper. “I’ve hunted elk with copper bullets and they’ve opened perfectly,” he says, “and the cost [of the bullets] is utterly insignificant in the overall cost of a hunt.”

Through its Lead-Free Landscapes initiative, the Federation works with hunters and anglers to increase knowledge about how lead can poison wildlife and habitats and discusses nontoxic alternatives for hunting and fishing. The program also collaborates with partners, NWF’s state affiliates, other conservation groups and the outdoor industry to host information sessions and share knowledge through traditional and social media.

Ultimately, the move away from lead is a question of personal responsibility. As noted conservationist Aldo Leopold wrote in A Sand County Almanac: “A peculiar virtue in wildlife ethics is that the hunter ordinarily has no gallery to applaud or disapprove of his conduct. Whatever his acts, they are dictated by his own conscience.”

Learn more about hunting and fishing with nonlead ammunition and tackle at nwf.org/leadfreelandscapes.

Leading the way on lead

Since 1975, the National Wildlife Federation’s state and territorial affiliates have adopted several policy resolutions urging a shift away from lead gear, citing lead’s toxic impacts on wildlife and habitats. In 1993, for example, they encouraged anglers to stop using lead sinkers and asked the fishing industry to make nontoxic tackle more available. And in 2007, they urged the U.S. Fish and Wildlife Service to require nontoxic shot for hunting wetland-obligate species such as snipe and rail and to study lead impacts on mourning doves. Visit: affiliates.nwf.org/policy-resolutions